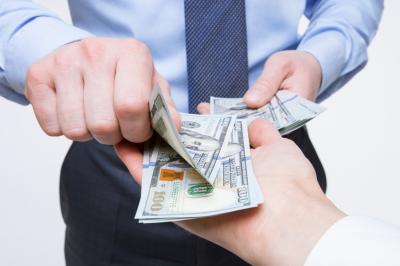 by Steve Brown
Share this Article:
Researchers find that the same area of the brain that is activated when people use drugs such as cocaine (nucleus accumbens) is also stimulated when people make money. We don't know how you feel when making money, but we note that bank compensation for employees is on the rise again according to the 2016 Crowe Horwath Financial Institutions Compensation Survey.
The survey noted that more banks are now willing to pay above-market rates given a tight jobs market - a trend that's risen sharply over the past 4Ys. Consider that in the 2016 study, almost 29% of banks reported plans to pay more than 10% above market for some jobs. That's up 5bp from the 2015 study, 10bp from the 2014 study and 15bp from 2013.
Not surprisingly, as compensation has ticked up, employee turnover has also risen. According to the survey, bank employees are changing jobs at the fastest pace in 10Ys, with non-officer turnover peaking at almost 19% and officer turnover reaching nearly 7%. By contrast, only 1Y ago, non-officer turnover rates stood at about 16% and officer rates at fewer than 5%.
Notably, banks have ramped up their hiring efforts back to pre-recession levels. Growth is a primary catalyst for jobs tightness, as Crowe found 36% of those polled said they are planning for normal growth while almost 14% are gearing up for expansion. Meanwhile, less than 4% of banks polled said they planning to reduce staff, while 34% said they are planning to maintain the status quo.
When it comes to paying up for talent, banks seem to be placing more emphasis on customer-facing and operational positions than on C-suite jobs. Among survey respondents in the $1B to $5B asset range, there were notable increases in median compensation levels among some mid-level and entry-level jobs. The median pay for commercial loan processors, for instance, rose almost 13% in 2016. Meanwhile, median pay climbed 9% for entry level credit analysts. By contrast, median pay for CEO and President roles rose only 5% and median pay for CFOs actually fell 4%.
These types of compensation studies are definitely regional in nature as some areas are much tighter than others so care must be taken not to read in too much. However, they can be good food for thought to help banks better digest the competitive landscape. At the same time, banks have to be careful to ensure compensation practices reflect industry best practices and don't fly in the face of sound business operations.
Certainly compensation trends at banks have been a hot topic in the wake of the Wells Fargo sales practice scandal. As banks face increased pressure from investors, customers and their boards of directors, care must be taken along the way.
What's more, lawmakers and regulators seem to be doubling down on efforts to ensure that bank compensation practices aren't sending the wrong message to employees. As such, expect exam teams to take a much closer look at incentive pay structures, as well as clawbacks for reputation-damaging misconduct.
Bad apples aside, we think it is good news that compensation is once again rising for some employees, as it signals the return of a stronger business environment and increased competition for top talent. After many years of sleepy demand in the industry, these trends are a welcome revival.
As you review your compensation practices and overall levels in the coming months, be sure to adjust for local conditions too.
Subscribe to the BID Daily Newsletter to have it delivered by email daily.

Fed Governor Brainerd in a recent speech indicated that while financial innovation holds promise for banks, institutions must also be sure to "understand and mitigate associated risks" that are both unique to fintech, and that exist as a result of using new technologies. Banks should understand that existing laws and regulations still apply here and directly address issues around incorporating nontraditional data in underwriting, ensuring the technology does not unfairly disadvantage some groups of consumers or may not be fair, and ensure the process is transparent.

The Wall Street Journal reports the dividend payout ratios for companies in the S&P 500 have reached 38% over the past 12 months, the highest level since 2008.

Research by Deloitte finds only 26% of companies award employee promotions based on merit, performance and competencies.