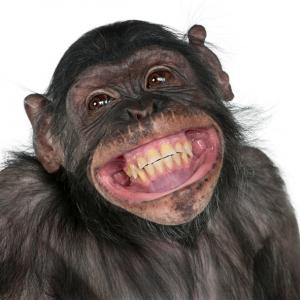 Wildlife photographer David Slater never could have imagined himself embroiled in a lawsuit over a selfie, but that's exactly what he's been dealing with for the past 2Ys. You see, a black macaque monkey named Naruto snapped a selfie using Slater's camera (no that isn't him in the pic and yes it is a chimpanzee). That image made it into Slater's book, and then eventually into other publications. All of those publications claimed the image didn't belong to Slater, because he hadn't personally created it. In 2015, the People for the Ethical Treatment of Animals (PETA) filed a lawsuit on Naruto's behalf, asking for a copyright for the image and that proceeds from it benefit the macaques on the reserve where he lives. The fact that PETA, multiple publications and even a high profile anthropologist are willing to fight over the rights of a monkey who more than likely doesn't realize or care that he has any rights, made us think about a new accelerator program that identifies the things that bank customers want and can use most.
INV Fintech, a virtual accelerator program launched in January, was created to identify the needs of bank customers and to back nascent fintechs around the world that are able to create products to meet those needs. The virtual program, a joint effort between financial services technology company Fiserv and fintech strategy news service Bank Innovation, has partnered with six financial institutions that will weigh in on the services and solutions that would be most beneficial to their customers.
According to a recent report from KPMG, a total of $9.4B globally was invested into 374 fintechs in 2Q of 2016 alone. While a large part of that funding comes from traditional institutional investors (such as private equity firms, mutual funds and hedge fund firms), other investors are also getting involved. Of the $1.3B invested into 97 deals within the US in Q2, 32% of that money came from corporate backers - some of the very companies that fintechs' offerings are most likely to disrupt. It is not surprising then, that there is rising interest in backing fintechs within the banking industry.
Through INV Fintech, startups from around the world in search of guidance and financing can apply for half year stints within the program, which will accommodate six startups at a time. For its part, Fiserv will provide them with some of the same technology it already provides for the banking industry, while Bank Innovation, in addition to writing profiles of each startup, will facilitate networking events that banks and other potential backers can attend. Though the accelerator program will specifically concentrate on Silicon Valley, New York, Europe and Israel, the fact that it is largely virtual gives it a global reach. It is also fairly unique in that the program has recruited banks and financial institutions to help identify the most promising fintech solutions.
For their part, community banks and the broader banking industry in general, will be keeping a close eye on what is happening here and to monitor the general monkeying around going on in fintech and in other areas too.
We will be back again soon with more to discuss in this area, as we continue to keep you informed as to fintech changes and opportunities - specifically designed for or impacting the community bank space.
Subscribe to the BID Daily Newsletter to have it delivered by email daily.

Yields shot up 7bp to 17 month high as oil prices strengthened and good news on the US economy continued.

Mastercard has a new Decision Intelligence service that uses artificial intelligence to catch attempted fraud in transactions throughout its card processing network.

Analysis by S&P Global Market Intelligence of merger and acquisition activity in the US bank and thrift sector finds 220 deals announced through Nov 15 vs. 246 for the same period last year (nearly 11% lower).

The European Central Bank (ECB) reports Italian banks by themselves hold 33% of the $1.1T in non-performing loan exposure in the overall region.

Roughly 75% of HR executives surveyed say their company plans to give employees a bonus for the holidays this year vs. about 67% last year.

Research by Javelin finds almost 50% of people opening a checking account online or through a mobile device - interestingly, 70% of people said they would prefer these channels for this activity.

Research by PwC finds 52% of baby boomers plan to work longer to save more money for retirement.
Copyright 2018 PCBB. Information contained herein is based on sources we believe to be reliable, but its accuracy is not guaranteed. Customers should rely on their own outside counsel or accounting firm to address specific circumstances. This document cannot be reproduced or redistributed outside of your institution without the written consent of PCBB.