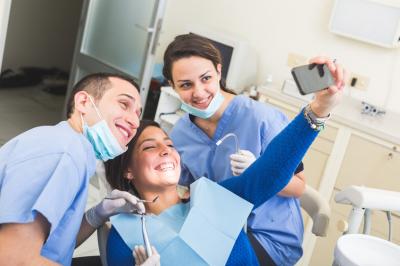 Bio, Digital And No Card Needed

The World Wide Web is full of funny stories about its most avid users - the famous millennial. One story is about a 16Y old on her way to the hospital with her parents to undergo a tonsillectomy. The girl is publicly confident, but privately worried, as her parents try to reassure her about the safety of the surgical procedure. They talk about anesthetics, the incision, mild pain and the short time she will need to stay in the hospital afterwards. The daughter remains anxious and wonders how the surgeon will keep her mouth open during the operation. Her father doesn't hesitate. "The nurse," he says, "will just have to give you a cellphone to hold and everything will be all right."
Now we don't know if you can bring a smartphone into the surgical unit, but in banking at least, mobile services keep on growing. To catch up with high tech competitors such as PayPal, Apple or Google, Chase is perfecting its Quick Pay option to transfer money within seconds from one account to another. When the service was launched, it was only available to Chase customers, but now only one party to the transaction needs to be a Chase customer. The other can belong to any other large participating bank.
PayPal's Venmo is also used by young customers. However, the banks have an advantage on Venmo - they are able to offer lower transaction fees. When the consumer buys real goods with the Venmo mobile option, the merchant must pay a fee and PayPal charges 2.9% on each transaction.
JP Morgan Chase intends to use its own network, ChaseNet, which will allow it to charge lower processing fees. That's an extended mobile service that could retain more customers within Chase's territory. We should note that the large banks continue to broaden their mobile offering not to make big bucks, but to hang on to customer loyalty and reduce costs. Thus, being able to sell credit cards, savings accounts, auto loans and mortgages all fit this approach nicely.
Of course, big banks and community banks alike need to constantly improve their mobile services to keep the millennial generation happy. That's one reason why Bank of America has reportedly launched its thumbprint verification tool for the iPhone platform. This lets the customer avoid passwords and account numbers altogether. The mere touch of a thumb connects them to their bank accounts and, if necessary, with customer service specialists.
Meanwhile, JP Morgan and Wells Fargo are also experimenting with biometric verification. Wells Fargo is testing a retinal scan and voice authentication with customers. Smartphones have excellent cameras that can record the veins in the white of the eyes, and a detailed picture can be compared to a stored picture. The bank recognizes the user, lets them log into accounts and wire money as needed. Voice follows a similar approach.
Technology progress doesn't stop at biometric verification. Smartphones may also be used for cardless ATM's. Bank of America, JP Morgan-Chase and Wells Fargo are quietly rolling out ATM's using NFC (Near Field Communications) technology that works with smartphones. Using a smartphone, consumers can withdraw money from ATMs. This innovation benefits the bank because the security within the mobile app helps cut down on card fraud and younger customers love it.
Bank of America executives have promised that 8,000 ATMs will support the cardless technology by the end of 2016 and Wells Fargo and Chase are also on board with this advancement.
As the big banks work out the details with new technologies, community banks should monitor things and look for efficient ways to prepare for their millennial bank customers. Imagine a wired teenager undergoing surgery and withdrawing cash at the same time. After all - nothing is impossible!
Subscribe to the BID Daily Newsletter to have it delivered by email daily.

The Pandemic, Cashless Payments & The Unbanked
As purchases become largely cashless due to COVID-19, the unbanked suffers. Ways you can help.

Yields climbed 6bp largely due to Dudley's comments of an expected rate hike this year and a solid increase in retail sales.

Research by RR Donnelley on M&A transactions finds the most important steps for ensuring effective communication with the target company during the diligence process are: holding regular conference calls with target company personnel (60%), using a virtual data room (48%) and maintaining a contingent of diligence team members at the target company's office (38%).

A Deloitte survey of CFOs at major companies finds the top external and internal risks cited are: global growth/recession, new or burdensome regulation, elections/political uncertainty in the US, finding qualified talent and interest rate increases/decreases.
Copyright 2018 PCBB. Information contained herein is based on sources we believe to be reliable, but its accuracy is not guaranteed. Customers should rely on their own outside counsel or accounting firm to address specific circumstances. This document cannot be reproduced or redistributed outside of your institution without the written consent of PCBB.