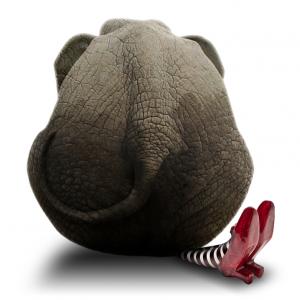 by Steve Brown
Share this Article:
Community bankers these days often tell us they feel crushed under the weight of an elephant when it comes to regulations and regulatory pressures. That got us thinking about elephants in general, so we did some quick research and found they can live to 70Ys old, their eyesight is poor, they have the biggest brains in the animal kingdom, they eat for 16 hours per day, babies weigh 250 pounds each and large males can weigh up to 14,000 pounds.
Now that you have hopefully learned something about elephants of animal variety, let's focus our energies on the regulatory weight bankers seem to feel every day. To do this, we crunched some data that we picked up from the FDIC website. While regulations can come from the OCC, Fed, CFPB and a host of other sources, we chose the FDIC because most community bankers in one way shape or form funnel through there eventually. Given the fact the regulatory agencies are more coordinated these days; the analysis should be pretty representative of bank regulation in general out there.
We begin by pulling in all of the Financial Institution Letters (FILs) the FDIC has issued through the end of August for both 2016 and 2015 for comparison. FILs are addressed to CEOs of financial institutions on the FIL distribution list, which are generally, FDIC-supervised institutions. FILs are used to announce new regulations and policies, new FDIC publications, and a variety of other matters of principal interest to those responsible for operating a bank or savings association.
Getting down to the analysis, we would say right off the top that if your bank feels like you have been getting crushed you could be right. Certainly, at the highest level when looking at this year through August there have been 58 FILs released vs. only 36 at the same point last year. That is about a 61% increase, which seems to be a big jump. On a monthly basis, that is about 7.3 per month this year vs. about 4.5 last year.
After some sorting to remove regulatory relief notifications (flooding in certain areas, etc.), those around call reporting and those that we would deem to be more informational in nature (supervisory insights report, website updates, savings programs, etc.) the numbers above change some. Once you do that sifting, there are 30 FILs focused on regulatory changes for this year vs. 17 for last year. While down from the gross number, that is still a lot to absorb and a huge increase YOY.
But, if you have been reading this section for some time you will know things aren't always as easy as first discussed. We went even deeper and took a detailed look at how many pages of regulations bankers would have to read through, interpret, route, discuss and deal with to really get an idea of how rough things are. Here we found that in 2015 you had to absorb about 2,058 pages (plus another 48 or so of informational stuff), while in 2016 you had to deal with 1,397 pages (plus another 98 or so of informational).
All told, that means in just these two periods your team has had to deal with some 3,601 pages of regulatory flow and that is just through August. After annualizing, the deluge jumps to about 5,402 pages over the 2Y period. Then, when you consider there are about 261 workdays in a year and you adjust for 3 weeks of vacation, you end up with about 492 days in total to deal with all of this flow. So, on a per working day basis, your team needs to deal with about 11 pages on average of regulatory stuff just to keep up with the Joneses.
No wonder bankers seem so tired these days and so many of them say they feel like they have the weight of an elephant sitting on them all the time.
Subscribe to the BID Daily Newsletter to have it delivered by email daily.

Royal Bank of Scotland said it will use cognitive tool IBM Watson Conversation to launch a pilot of a chat bot called Luvo. The chat bot will be rolled out to customers in December and will answer customer inquiries, has the ability to change its tone and actions (when it senses unhappiness or frustration), and route more complex requests to advisors.

First Foundation Bank ($3.5B, CA) will acquire 2 branches from Pacific Western Bank ($21B, CA) for an undisclosed sum. The branches have deposits of about $200mm and boost the total for First Foundation to 11 overall.

JPMorgan is projecting 10Y Treasury yields may climb as high as 2.00% as soon as Q4, as momentum picks up and the growth outlook continues to slowly improve.

Bloomberg reports Amazon captured almost 40% of all online retail sales this past holiday season, making it the leader by a wide margin.

A Compensation Advisors survey of bank executives and directors finds 56% of respondents say they do not have stock ownership guidelines or requirements for outside directors, 19% say they require a minimum or fixed number of shares and 12% require a minimum share value ownership.

The Financial Times reports global M&A volumes have fallen to a 3Y low, due to issues surrounding the Brexit. Volume overall is down 22% YOY.