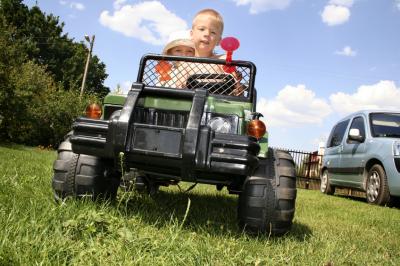 After Tara Monroe was arrested for allegedly driving under the influence in 2015, the father of the Texas State University student didn't waste any time confiscating her Jeep. That, however, didn't stop Tara, who had no intention of riding around on the bicycle her father left her as a replacement means of transportation. Instead of taking to her new bike, Tara took to the Internet - where she found a Barbie Jeep for sale on Craigslist and began driving it around campus.
Tara's unique approach to getting around a decision she didn't like made us think about legislation recently passed by the House that would allow more community banks to get around the Dodd-Frank Act's leverage and risk based capital requirements.
Under H.R. 3791, which was passed with a vote of 247 to 141, the threshold for exemption for smaller banks and thrift holding companies would climb to $5B in consolidated assets - up from $1B. Such an increase would allow a larger number of community banks to increase their overall lending to both consumers and small businesses, reduce costs and increase corporate flexibility. The bill's passage came just over a year after the Fed already increased the exemption threshold to $1B, from the $500mm mark initially included within Dodd-Frank. According to regulators, the initial increase provided exemption from certain capital and regulatory guidelines for roughly 500 small banks and thrifts, while the latest increase would exempt an additional 400 or so.
Supporters of the latest increase argue that it would be beneficial for small businesses because it would make it easier for them to borrow needed capital at a time when the number of community banks, traditionally the most active lenders to this group, has been consolidating.
Supporters also argue that increasing the exemption threshold would help stave off further consolidation by making it easier for smaller banks to raise the capital needed or to issue debt to form new holding company and to make acquisitions.
Though the Fed is probably not a proponent of bank holding companies issuing a bunch of debt to finance acquisitions, it has acknowledged that some issuance is often a necessity in order to transfer the ownership of smaller banks to holding companies. Because of this, back in 1980, the Fed initially decided to allow qualifying small bank holding companies to have higher debt levels than its capital guidelines allowed for larger bank holding companies. Not surprisingly, both the ICBA and ABA have written letters highlighting their support for the threshold change.
For their part, detractors say the threshold change would jeopardize the soundness of bank holding companies by encouraging them to do little more than to assume more debt. The White House is even on the record against the increase saying, "Community banks with $1 to $5 billion in assets already have sufficient access to capital markets and as a group are exhibiting health and resilience."
Other opponents of the bill argue that its passage would lead to further consolidation among community banks by encouraging small bank holding companies to seek out acquisitions of other small banks for the wrong reason - primarily to boost their own bottom line.
We will have to watch and wait to see how this all turns out, but in the meantime we note the legislation will probably move along at about the same speed as the Barbie Jeep, which tops out at only 5mph. Go Tara go.
Subscribe to the BID Daily Newsletter to have it delivered by email daily.

At the conclusion of the FOMC meeting, rates were left unchanged despite improved economic conditions and it was reiterated that future rate hikes would be gradual. Yields fluctuated throughout the day before ending -6bp.

An Animoto survey of small business owners finds 55% say they have produced or outsourced a marketing video in the past 12 months.

The Commerce Department reports Americans reported personal income from renting their homes of 4.4% in Q1, marking an all-time record. The percentage is up sharply from the 0.7% level of 30Ys ago.

The Wall Street Journal reports the Fed will release new requirements for the largest banks related to stress testing. The goal is to make sure the largest banks are well positioned to handle severe economic stresses, but the spillover effect is it also drives the amount these banks can pay out in dividends and how much capital must be retained. The tests this time will be much more difficult, so the largest banks remain concerned.

Deloitte research finds only 14% of executives surveyed would rate their company "strong" when it comes to succession planning throughout the business.

Government definitions consider renters who spend 30% of their income on housing to be "cost burdened" while those who spend 50% or more are considered "severely burdened".

Negative interest rates in Japan have created strife between the banking system and the government. Some banks have stopped supporting the government bond market given the negative yields.
Copyright 2018 PCBB. Information contained herein is based on sources we believe to be reliable, but its accuracy is not guaranteed. Customers should rely on their own outside counsel or accounting firm to address specific circumstances. This document cannot be reproduced or redistributed outside of your institution without the written consent of PCBB.