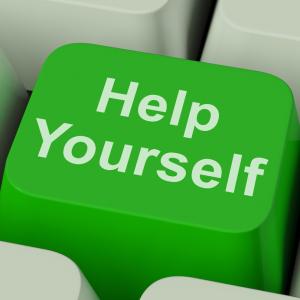 In what could be an unintended consequence of discussions swirling around higher minimum wages, Wendy's has cooked up some attention recently by announcing that self-serve kiosks will be made available across its 6,000-plus fast food restaurants in the second half of this year. The kiosks reportedly allow diners to order and pay for their food without the need for human interaction. The company, which will allow each franchise to decide whether or not to use the labor-saving technology, is not alone in its push toward automation. McDonald's has also reportedly been testing similar kiosks.
Given all the advances in technology, banks too are investing significantly in self-service technologies. These run the gamut from ATMs to remote deposit capture and mobile banking. The shift is taking place with good reason, considering the vast and rising costs associated with human capital and changes in how people want to interact when doing certain tasks.
According to a report by Accenture, US banks employ roughly 514,000 tellers and pay them an average yearly wage of $25,760. That translates into an estimated annual industry spend of more than $13B just on tellers. Consider also the high cost of building and maintaining branches at an average of maybe $500,000 to $1mm each. Then, sprinkle in a digital demographic shift and you have all the makings for a big move toward self-service. Accenture points out that if each branch could save just $25,000 (or the average annual wage of one branch teller), a typical bank could achieve a 1% improvement in its Efficiency Ratio.
Banks are also reacting to the rise of what Accenture dubs "the digital do-it-yourself trend." About 50% of US adults now use smart phones and tablets to bank, which is 29mm more than last year, according to a recent Javelin study. Their research, which covers the top 30 financial institutions by deposit size, also points to a dramatic jump in the number of accounts opened on mobile devices and mobile banking using a mobile device. What's particularly notable is that as more users go the mobile route, the potential to reduce branch staff deepens. While community banks may be somewhat behind the larger banks when it comes to mobile adoption rates, eventual staff reductions due to mobile growth is a real possibility for the future here too.
We suspect all banks will also ramp up efforts to improve automation even more in the wake of new Labor Department rules on overtime. In May, the Department of Labor issued its long-awaited final overtime rules, which reclassify millions of employees as entitled to be paid overtime. The new rule is effective Dec. 1 of this year and provides an exempt employee salary threshold of $47,476. That's almost 6% less than the originally proposed $50,440, but is more than double the previous threshold of $23,660. The rule also includes a hike every 3Ys in the minimum salary for exempt employees.
Of note to bankers, both the ABA and ICBA are strongly against the rule, saying it is harmful to bank employees and the banks that employ them. The ABA also noted the disproportionate effect the rule will have on small banks. Complaints notwithstanding, in the coming weeks and months banks and all businesses are going to have to seriously evaluate several issues related to the new rules and determine how best to deal with the likely strain on compensation budgets.
Automation is clearly an ongoing trend in banking and elsewhere too. Emerging technologies, as well as the burgeoning costs of human capital, are certainly areas that require careful consideration. At the same time, we have to be mindful that customers aren't robots and there are ample benefits to good, old-fashioned human interaction. This is especially true when it comes to banking transactions because they certainly aren't your typical burger-and-fries-type order.
Subscribe to the BID Daily Newsletter to have it delivered by email daily.

Renewed concerns of uncertainty over the Brexit ramifications spurred a 7bp drop in yields.

Regulators are taking a closer look at auto lending activity in the financial industry, as Americans take out the largest loans in this category in history ($30,032 on average), pushing up monthly payments and extending loan terms (average is now 68 months). Meanwhile, Jamie Dimon (CEO of JPMorgan) went even further saying things are getting so crazy that "someone is going to get hurt".

The Wall Street Journal reports its analysis of US Census data finds inflation adjusted rents have soared 64% since 1960, while incomes have only risen 18%.

A Bank Director survey of risk practices finds the primary duties of the Chief Risk Officer (CRO) are: compliance with risk management policies (93%), regularly reporting to the risk committee (84%), responsible for creating a risk culture within the bank (77%), monitoring and testing risk controls (73%), implementing risk training for the board (67%), implementing risk training for employees (60%0, establishing risk limits (54%) and overseeing cybersecurity (46%).

A Bankrate.com survey finds about 66mm US adults have absolutely nothing saved for an emergency. Meanwhile, a separate report on the same subject by the Fed finds 47% of people said they could not afford an emergency expense of $400 and would have to sell something or borrow money to cover it.
Copyright 2018 PCBB. Information contained herein is based on sources we believe to be reliable, but its accuracy is not guaranteed. Customers should rely on their own outside counsel or accounting firm to address specific circumstances. This document cannot be reproduced or redistributed outside of your institution without the written consent of PCBB.