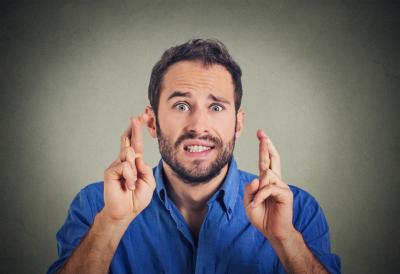 People have lots of superstitions around ways to be lucky in life. They include: avoiding stepping on sidewalk cracks, not walking under ladders, carrying a rabbit's foot, picking up a penny, knocking on wood, crossing fingers and a host of others. We bring this up because banks and global investors are doing all of these to avoid any potential bad luck that could spill out of the UK vote to pull out of the European Union (EU) in the so-called Brexit.
On Friday, to say investors were stunned and surprised would be an understatement. The market hates surprises and uncertainty and this carried both in spades, so the reaction was swift and ugly. The Dow tanked over 600 points, the NASDAQ slid over 200 points, financial stocks were the hardest hit sector of the day (worst day in 5Ys), the pound sterling fell 10% against the dollar and the 10Y Treasury yield was hammered down to 1.40% before slowly rebounding throughout the day and eventually closing at around 1.57% (still down 18bp from Thursday's close).
The market reacted so strongly because the action was not only surprising, but it also adds a huge amount of ongoing uncertainty. The UK now has 2Ys to exit the EU, so it may be in the press that long and beyond. That adds uncertainty and increases volatility. Further, after the defeat, Prime Minister Cameron resigned, which adds even more uncertainty to the equation. As if the 5th largest economy in the world leaving the EU weren't enough for investors to deal with, now speculation increases that other countries may follow (France, Italy and the Netherlands have called for their own referendums now) and the EU itself may disintegrate within 5Ys.
Given it is almost 3,500 miles from New York to London, most community bankers we know weren't all that worried about the British move at the outset. Most were content to monitor the market whipsaw and ponder whether this could be another so-called "Lehman moment" where unforeseen dominoes begin to fall as the world slips into an ugly recession.
Well, we are pleased to say that did not happen on Friday and most pundits now say there will only be a moderate to medium impact on the US. Consider that trade between the US and the UK is only 0.5% of US economic activity. In addition, while the UK is the 7th largest trading partner of the US, it accounts for only about 3% of total exports (the US exports about $2.2T of goods and services annually of which the UK is about $60B).
Also consider the impact on the UK itself. The UK GDP is 2.1% this year and early estimates put the impact of the Brexit from 0.3% to 1.0% all-in. That means while much work will need to be done and the UK will slow down, it will not slip into recession. Back in the US, our GDP is expected to be around 2.0% this year and the impact of the Brexit here is projected to be from 0.1% to 0.5%. That means while we too will see a slowdown, we also will not slip into recession.
Now that this high level background has been discussed, we felt it was most important to bring it back to the specific impact to community banks. After all, you are our customers and you also own our company, so we wanted to make sure everyone was up to speed on this issue. As such, we have pulled together our internal teams, reached out to regulators and jumped on the research. Now that this work has been completed, we invite all of our readers who wish to do so to attend a free webinar that will get into the Brexit and its specific spillover to and impact on community banks. Our research finds the impact is larger than expected by the numbers and not always intuitive, so we urge our community bank readers to attend so you can take steps to better prepare. Join us Wednesday for a 30 to 40 minute free webinar.
Brexit: A CEO Perspective for Community Bankers
Join CEO Steve Brown on a free webinar, where he will discuss the specific impacts of the Brexit on community banks and your customers. Available times are Wednesday, June 29th at 9am or 11am (Pacific). Register for this free CEO Talk by clicking here.
Subscribe to the BID Daily Newsletter to have it delivered by email daily.

The Coming Of Digital ID Cards
Digital licenses are quickly gaining traction and could significantly impact the way that the banking industry verifies an individual's identity. We give you an update.

Large bank stocks globally were hit hard Friday, after the UK voted to leave the European Union. In response, some large global banks indicate they are reviewing large employee job reductions as they seek to rebalance their operations.

What a difference a day makes. Now that the UK has voted to leave the EU, investors have pushed the odds of a rate hike this year to about 16% while 12% now expect the Fed to cut rates. This will be interesting to watch in the coming months to see how things develop.

The OCC is among regulatory agencies seeking to better regulate online marketplace lending activities. The OCC said it is exploring whether it can apply fair-lending rules to small-business loans from online lenders that partner with banks. We will monitor this and report back as things move around but community bankers should be aware.

The IMF has downgraded its US economic forecast to 2.2% vs. 2.4% estimated prior.

Banks should be aware that research by Verizon finds ATMs account for 94% of security breaches from skimming vs. only 5% at gas stations.

Deutsche Bank said it will close 188 branches and lay off 3,000 employees as it seeks to reduce costs and restructure its retail banking operations.
Copyright 2018 PCBB. Information contained herein is based on sources we believe to be reliable, but its accuracy is not guaranteed. Customers should rely on their own outside counsel or accounting firm to address specific circumstances. This document cannot be reproduced or redistributed outside of your institution without the written consent of PCBB.