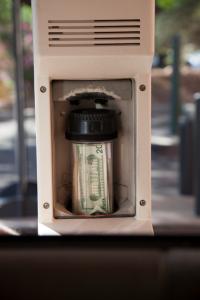 The Convenience Of Drive-Thru Banking

Whether you are a health food nut or a fast food junkie, our bet is that you've frequented more drive-thru windows than you probably want to admit. Like it or not, drive-thru windows and the convenience they provide are as American as hot dogs and apple pie. The drive-thru windows that have become a staple of the fast food industry trace their origin to 1931, when the idea was first tested by the Texas Pig Stand chain. It wasn't until 1947, however, that the first fast food restaurant built around the convenience of a drive-thru, Red's Giant Hamburg, opened its doors (well, its window) in Springfield, MO. These days you can't throw a stone without hitting a fast food restaurant with a drive-thru, but they are by no means limited to the fast food industry. Drive-through windows are all about customer convenience.
Speaking of convenience for the customer, things have been evolving in banking as well over the years. Given the importance that people place on convenience, we wanted to take a moment to discuss the clearXchange network, formed in 2011.
The network is the first and largest US digital payments network created by banks. The network allows people to send money directly to their bank account once registered on the network to another bank account at any bank registered on the network. It was formed and originally owned by Bank of America, BB&T, Capital One, Chase, PNC, US Bank and Wells Fargo. It has since been acquired in January of this year by Early Warning. For its part, Early Warning made the move as it plans to integrate its fraud prevention services, authentication capabilities, and now the bank network to create the largest, most secure real-time payments ecosystem in the US.
The idea behind the clearXchange network is interesting. After all, the large banks that formed it collectively represent roughly 60% of the mobile banking industry. Further, by taking matters into their own hands and creating their own mobile payment network, the banks are seeking to reclaim some of the business they have lost to fintechs that continue to expand their hold on the mobile payments industry. By leveraging existing banks and accounts within banks, the network has the added benefit in theory of being secure and easy to use for customers.
Structurally speaking, clearXchange allows people to use a mobile phone number or email address to send and receive money for a fee. On the other side of the fence, it also allows people to send and receive money for free with participating banks and account holders on the system.
The payments made through fintechs such as PayPal tend to be on the smaller side, averaging $300 or less. However, as these businesses create a larger base of regular, loyal users for themselves they are becoming a greater threat to the traditional banking industry. Beyond straightforward payments services, several fintechs have already begun expanding their own business lines by introducing lending units. Plus, as venture capitalists pour billions of dollars of investment money into mobile digital payment companies each year, with more and more fintechs coming down the pipeline, the threat that these payment services will continue to encroach further into traditional banking business lines and products is significant. As such, we are pleased to see banks at least fighting back.
While it remains unclear which banks can join the clearXchange network, the venture is one we think community bankers may want to monitor (along with the fintech companies). At a minimum it gives you a glimpse of the possibilities of the future. Maybe this is how things started when the first drive-through popped onto the scene so many years ago.
Subscribe to the BID Daily Newsletter to have it delivered by email daily.

CBRE reports rates for prime spaces near large population centers jumped 9.9% last year and an expected 6.0^ this year (with the highest up 29.8%), as warehouse demand to deliver goods to consumers soars.

A survey by Small Business Trends finds 36% of small business owners say they do not respond to comments from social media. Also of note: 30% only respond when asked a question, 15% say they always respond, 11% say they respond when they feel like it and 6% say they only do so when they have time.

S&P projects the overall loan default rate for collateralized loan obligations will climb from 2.8% last year to 3.9% at the end of this year (but still below the historical norm of 4.4%). Last year 40% of defaults were in oil and gas companies and 15% were in metals and mining.

A survey by Cox business finds 90% of US consumers say they frequent small businesses at least 1x per week. About 63% said they did so to support local entrepreneurs.
Copyright 2018 PCBB. Information contained herein is based on sources we believe to be reliable, but its accuracy is not guaranteed. Customers should rely on their own outside counsel or accounting firm to address specific circumstances. This document cannot be reproduced or redistributed outside of your institution without the written consent of PCBB.