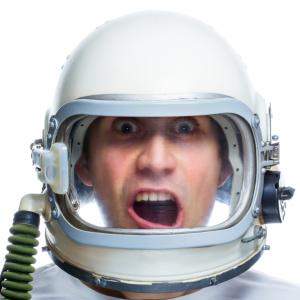 The Martian And I Have Cool Apps

by Steve Brown
Share this Article:
For all of us who dreamed of one day becoming an astronaut, the Martian movie is great. The survival story starring Matt Damon is all about how a scientist left behind on Mars by his crew survives against all odds. His crazy experiments include poop potatoes and water extracted from hydrogen, which was extracted from rocket fuel oxidized by burning.
The Martian reminds us of how tricky NASA explorations can be and how creative astronauts have to be at times just to get by. If nothing else, the movie encourages real life amateur scientists to look at NASA's cool apps. Web surfers can stay up to date on space news, launch countdowns, shuttle missions and social media feeds. They may even play with the Lunar Electric Rover Simulator and drive over a virtual lunar landscape.
Banks don't yet have such cool apps. After all, there are no Fed cash vault Electric Rover Simulator's in the making, but big and small banks alike are offering some pretty useful apps nonetheless. Consider Orrstown Bank, PA, for example. It lets customers ask questions on their smartphone and in their own words. The app also allows the customers to request that a banker call them. The customers may also ask how to get online banking access. Another cool feature is the housing listings in the community. The consumers tell the price bracket they can afford, the number of bedrooms and bathrooms they are looking for and their favorite bank shows what is available near them. This app supports the bank's efforts to deepen digital relationships.
Another favorite bank app out there is from Ally Bank, UT. It does all the normal stuff, plus it lets customers search through mobile transactions on the fly and allows customers to deposit checks up to $50,000.
PNC Bank, PA also has a pretty fancy app. It lets customers transfer money to family and friends via email or mobile phone text, view balances using text messaging and incorporates a virtual wallet to allow customers to track and manage their spending through account activity inside and outside the bank.
Other interesting app features from around the industry include: American Express - offers discounts and recommendations of nearby merchants based on the customer's location; Bank of America - has a feature suggesting easy mobile check deposit, cash back rewards and merchant funded deals; City Bank, TX - protects the customer's account when a debit card is lost or stolen and has a temporary turn off button. It can also unblock foreign transactions and show rewards checking status. Mercantile Bank of Michigan - keeps archives of past customer transactions done via Paypal. US Bank - allows customers to take a picture of an invoice and pay it with the click of a button.
Finally, USAA, the bank of military members, has done a lot of research on voice and facial recognition. USAA has almost no branches, so the bank had to work hard on its virtual proximity. The customers use their smartphone camera to log into their accounts. To be sure that it's not just a picture the bank sees, but a real human being, the customer says a designated sentence, or offers a blink of the eye. Smile, you're in.
While community banks are still stuck in many ways with the offerings of core providers, the pressure is on to keep enhancing services to meet technology and customer challenges head on. This isn't life and death stuff perhaps, as it is with NASA, but we think it will take some real bank rocket science over an extended period of time to eventually land where you want to land.
Subscribe to the BID Daily Newsletter to have it delivered by email daily.

1) Ally Bank ($111B, MI) will acquire online wealth management and brokerage company TradeKing Group for about $275mm. Trade King provides online trading tools for self directed trading of stocks, bonds, options and mutual funds to individuals and manages $4.5B in client assets. 2) The management team of The Palisades Group, an investment advisor subsidiary of Banc of California ($8.2B, CA) will pay an undisclosed sum to buy out the subsidiary company. 3) DNB First ($749mm, PA) will acquire East River Bank ($311mm, PA) for about $49mm in cash (13%) and stock (87%) or about 1.6x tangible book. 4) State Bank and Trust Co ($3.5B, GA) will acquire The National Bank of Georgia ($375mm, GA) for about $68mm in cash and stock. 5) Union Bank & Trust ($7.7B, VA) will acquire independent registered investment advisory firm Old Dominion Capital Management (VA) for an undisclosed sum. Old Dominion manages about 300 client relationships. 6) Westfield Bank ($1.3B, MA) will acquire Chicopee Savings Bank ($677mm, MA) for about $110mm in stock. 7) United Community Bank ($9.6B, GA) will acquire Tidelands Bank ($466mm, SC) for about $2.2mm in cash. 8) First Interstate Bank ($8.7B, MT) will acquire Flathead Bank of Bigfork ($232mm, MT) for about $34.2mm.

The FDIC has reduced the heightened supervisory monitoring period for de novo banks from 7Ys to 3Ys. The move may increase the number of de novo or new bank filings, but only time will tell by how much.

Reuters reports the US Treasury is preparing to release a new rule that would force banks to seek the identities of people behind shell company account holders following the hubbub created by the Panama Papers release. If so, banks can expect regulatory compliance costs to increase.