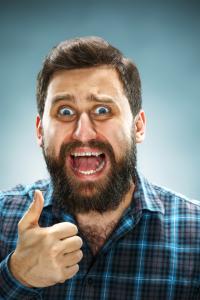 Baby Boomers have been the dominant generation for so long and now all the press can talk about is what the Millennials are all about. Once again, poor Generation X is stuck in the middle and largely ignored. It's such an unfortunate situation, as few people even know how the generation got its name. The popular notion is that author Douglas Coupland coined the term in a 1991 book, but he himself credits spiky-haired rocker Billy Idol, who had a band called Generation X in the 1970s. As it turns out though, Idol named the band after a 1965 British sociology book on his mother's shelf. Apparently, the phrase was first used by a photographer in 1952 about UK kids who were turning 21. That means of course, that Gen X isn't Gen X after all.
No respect, we tell you, but bankers would be well-advised to pay more attention to Gen X in the coming years. After all, they are the older siblings or parents of Millennials and they will get the money first that the Boomers are going to pass along. They were born between 1960 and 1980 and are 37 to 56Ys old.
To get more insight, consider a study by Deloitte that finds while Baby Boomers should continue to have the greatest share of wealth for the next decade and a half; it's Gen X who are sneaking up. Gen X in fact, is now entering their prime earnings years, so bankers should take note and ignore the press perhaps.
The forecast finds: Boomers' share of net household wealth will peak at 50.2% by 2020, then decline to 44.5% by 2030. Then it will quickly taper off as mortality rates escalate by 2030 as ages range from 66 to 84Ys old.
Gen X will have the highest increase in share of national wealth as its share grows from under 14% of total net wealth in 2015 to nearly 31% by 2030. The Millennial generation will experience the fastest growth rate given such a low starting point, but its share of wealth will remain below 20%.
Currently, Gen X is the most active homebuyer group, making up 32% of purchases by value. Baby Boomers represent 31%, while Millennials make up 28%.
Deloitte notes that while Baby Boomers "should remain a priority" for financial-services companies, Gen X is "the next big fee pool." Of note, bankers will have to work to capture this group, as Gen X was hit hardest by the recent financial downturn and has high levels of student debt. This means it will take time for the group to reach Baby-Boomer levels, but the path is set. Gen X should finally outnumber the baby Boomers in 2028, but by that time, they'll have been in their peak earning period for awhile.
Deloitte indicates that companies who "haven't yet woken up to Generation X's potential may be too late to the party." The report also finds that since 2015, about 37% of Gen X report having more than $100,000 in investable assets. Banks that can help Gen X households manage debt, plan for expenses, and prepare for retirement "may be able to create substantial incremental value for their Generation X clients."
Millennial discussions still dominate the research because this group is the largest in the workplace now, but don't forget their bosses in nearly all cases are either Boomers or Gen X at this point and they are the ones with the most money as a result. As such, no matter how Gen X did or did not get their name, perhaps is it time for bankers to do a little rebel yell.
Subscribe to the BID Daily Newsletter to have it delivered by email daily.

Markets closed due to Good Friday.

CNBC research finds government reports on GDP can be off wildly by 35% or more. CNBC looked at quarterly reporting back to 1990 and found "an average error rate of 1.3 percentage points, so a 2.0% growth rate on average would be revised to 2.2% or 0.7%" when all was eventually said and done. Since banks use GDP as a yardstick for loan growth, the potential for future loan losses, stress testing and a host of other things, knowing this is important for modeling purposes.

The Commerce Department reported Q4 GDP growth climbed to 1.4% from 0.7% reported prior. However, based on the recent CNBC analysis of how far off the mark this can be, the number is perhaps either 0.1% or 2.7%.

Fed Atlanta President Lockhart said he believes "there is sufficient momentum" to raise rates "possibly as early as the meeting scheduled for end of April." Meanwhile, Fed San Francisco President Williams said he expects a rate hike in April or June provided the economy keeps performing as expected. Finally, JPMorgan indicates they believe it is unlikely that the Fed hikes rates at the April meeting, but the June meeting is possible and the July meeting is expected.

CNN indicates a new report by Standard & Poor's finds that in the past 4Ys, 75% of companies accessing the debt markets for the first time were assigned a "B" rating by S&P. That has helped push the average rating on US corporate debt to a 15Y low. Analysts say low rates and plentiful investor cash are likely key factors in the increase.

A survey of financial professionals by the AFP projects GDP this year will be: 1.0% to 1.9% (54%); 0.0% to 0.9% (19%); 2.0% to 2.9% (19%); GDP will contract (6%); and 3.0% to 3.9% (1%).
Copyright 2018 PCBB. Information contained herein is based on sources we believe to be reliable, but its accuracy is not guaranteed. Customers should rely on their own outside counsel or accounting firm to address specific circumstances. This document cannot be reproduced or redistributed outside of your institution without the written consent of PCBB.