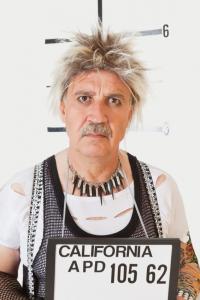 When it comes to avoiding the police, most criminals and individuals running from the law will go to almost any extent possible to avoid having a clear image of them captured by any sort of camera. But Lima, Ohio resident Chris Pugh is not your average criminal. After the 45-year-old failed to show up for a late December court appearance for a DUI charge against him, the Lima police department put a warrant out for Pugh's arrest and circulated a mug shot of him that they had on file. It seems, however, that Pugh, who was also wanted for questioning regarding open arson and vandalism cases, was extremely self-conscious about his image. After seeing the mug shot police had circulated, Pugh texted Lima's police department a photo of himself sitting in a car and smiling. Though blown away by the blatant disregard for their efforts to find him, the police were quick to take advantage of the additional photo he had provided and posted it on their website in case any followers should run into the fugitive.
After reading about these bizarre antics we couldn't help but think about how nice it would be if bank robbers and hackers were to follow his lead and start sending law enforcement nice, clear photos of themselves. Since that is probably not going to happen, we figured community banks would be well served by being aware of efforts Google is undertaking that could help banks beef up their effort to secure networks against potential cyber attacks.
Google recently announced that it has rebranded its Google Ideas group as Jigsaw, a technology think tank and incubator that is working on several security measures that could help community banks beef up their security efforts. Though Jigsaw's stated purpose is to use technology to attack some of the "toughest geopolitical challenges," like defending some of the world's most powerless populations such as human rights groups and election monitors that do not have the sophistication or resources needed to fend off attacks from hackers, many of the tools the incubator is working on could prove equally useful for community banks.
Take for instance, Project Shield, a reverse proxy technology available for free for any website that is routed through Google infrastructure. Using its reverse proxy technology, Jigsaw is able to protect websites from distributed denial of service attacks (DDoS), where hackers simultaneously trick millions of computers into visiting a specific website in order to overwhelm the server supporting that site and temporarily put it out of commission. DDoS attacks are frequently aimed at financial institutions.
For example, in early February HSBC was the victim of one such attack. It forced the bank's UK website to shut down and ground its mobile services to a halt. Though HSBC said it was able to successfully defend itself against the attack, such attacks can be used as a way of covering up other electronic theft coming in from another area. The bad guys use this technique to overwhelm IT teams as they then transfer massive amounts of money from major accounts and wipe all data for those accounts.
Another Jigsaw effort that may be helpful for community banks is Password Alert. This program is designed to protect users from becoming the victims of phishing efforts that target unsuspecting people to inadvertently hand over their usernames and passwords. Similar to the way spell check programs identify typos, Password Alert monitors for sophisticated phishing efforts that will reroute an internet or mobile user to fake web pages that mimic legitimate websites. As soon as the program detects that an individual has entered their Google password on a page other than Google, it will send an instant alert prompting that person to immediately log in and change their passwords. Since such efforts are often aimed at getting passwords for banking and credit card accounts, using such a program may allow community banks to provide their customers with an additional layer of security.
Unfortunately for Lima police, Jigsaw has yet to create anything that could help them keep Pugh's efforts to run from the law from making him an overnight celebrity on Facebook. Shortly after news broke about Pugh's photo submission to the police, a page called "Free Chip Pugh" popped up. There, tons of fake Pugh sightings were posted, many of which feature photos of Pugh superimposed over pictures of locations ranging from Lima's police department, to tropical beaches.
Subscribe to the BID Daily Newsletter to have it delivered by email daily.

MetLife is selling its US advisory unit with 4,000 employees to Massachusetts Mutual Life Insurance. MetLife continues to remix its business to avoid heavy government regulation and in reaction to upcoming fiduciary requirements (retirement advisors have to act in the best interest of their clients when providing investment services).

A survey of Millennials by Morphis finds 94% are unsure where the liability lies if their account is hacked, 93% would change banks in the event the bank did not cover loss of funds due to fraudulent activity, 75% believe their banks online services are very secure, but 53% say they are never prompted to change their password.