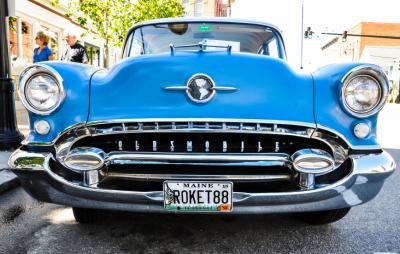 In 1897, Ransom Eli Olds founded the Olds Motor Vehicle Company. His company became the first high-volume manufacturer of gasoline-powered vehicles and was also the first to use an assembly line to mass produce cars (yes, even before Henry Ford). In 1908, General Motors (GM) acquired the company, maintaining Oldsmobile as one of its staple brands for the majority of the 20th Century. By the 1980s, however, younger people favored more modern brands. In 1988, hoping to reboot the Oldsmobile brand, General Motors reworked the look of the line and launched an advertising campaign around the slogan "This is not your father's Oldsmobile." Unfortunately for GM, the campaign backfired. Not only did younger people fail to embrace Oldsmobiles, buyers who had long remained loyal to the brand their parents had always driven were unhappy with the redesigned vehicles. At the end of 2000, GM announced plans to phase out the brand, and the last Oldsmobile was built in April 2004 - 107Ys after the company began.
We couldn't help but think about the similarities between Oldsmobile's efforts to capture younger customers and the banking industry's own struggles to attract the millennial generation. Though we don't necessarily buy into all the stereotyping of millennials, a few things are indisputable, such as the fact that most millennials are saddled with more college debt than any generation before them. The simple fact is that most of them couldn't even start paying down this debt upon graduation because of the overall lack of jobs that awaited them in a troubled economy that followed the credit crisis.
It should also go without saying that millennials are more familiar and reliant on technology and particularly mobile technology. Faced with these realities, community banks should revisit the way they target millennials and the generations coming up behind them, as they are not following the same path as their predecessors, so you will have to remain flexible.
Think about the impact of such large school loans. These force this generation to forgo aspirations such as owning real estate and push it to the back burner until debt is paid down. As such, the big ticket items millennials are purchasing tend to be much more modest.
In addition, instead of traditional credit cards, millennials have been gravitating to alternative forms of credit. These include online providers that can allow borrowers to make payments up to 12 months after a purchase is made.
In the same way that millennials want instant credit with transparent pricing and repayment terms, they are also gravitating to non-traditional banking services that allow them to do as much as possible through their phones. They crave all things instantaneous with the click of just a button or two. There is just no need to use paper of any sort or to navigate multiple pages or menus. That is why automated investment platforms are also gaining traction with this group. They don't require any involvement with physical investment advisors unless the user wants to do so--then they just click.
Millennials are also rejecting traditional checking accounts where fees depend upon factors such as the average balance maintained, to the number of monthly transactions. Instead, they seek clear, standard pricing. Given these factors, attracting millennials means the need to develop high-speed, user-friendly mobile bank offerings with basic fees.
Fortunately for community banks, catering to the tastes of millennials doesn't mean the need to risk turning off the generations that came before them. While the individuals that comprise Gen X may not be quite as addicted to technology as millennials, both Gen Xers and their baby boomer parents have been rapidly embracing online banking and mobile banking capabilities too. As such, any improvements in these areas or efforts to build capabilities will not be exclusively for millennials.
If Oldsmobile's fate serves as anything, it should be a reminder that courting the younger generations shouldn't come at the cost of destroying a rapport with the generations before them.
Subscribe to the BID Daily Newsletter to have it delivered by email daily.

There was little movement in Treasuries as yields fell 1bp in advance of Friday's jobs report.

Congress is moving to force bank regulators to treat certain municipal bonds as high-quality liquid assets. The problem is that regulators aren't convinced municipal bonds are easy to sell in a crisis, which could lead to increased losses and potential issues in the marketplace. The SEC has also done research that finds less than 1% of municipal securities have traded more than 100x in a 10-month period and 70% of bonds never trade.

The CFPB has ordered online payment processor Dwolla to pay a $100,000 fine for deceiving customers about its data security practices in the first such action of its kind. The CFPB said Dwolla failed to encrypt some personal consumer information.

A survey of 300 directors by Deloitte finds steps respondents have used to prepare for a crisis are: evaluating key crisis scenarios (50%); evaluating strengths, weaknesses, opportunities and threats (50%); identifying relevant stakeholders (49%); engaging multifunctional teams (46%); evaluating worst case scenarios (43%); and engaging stakeholders in analysis of specific scenarios (41%).
Copyright 2018 PCBB. Information contained herein is based on sources we believe to be reliable, but its accuracy is not guaranteed. Customers should rely on their own outside counsel or accounting firm to address specific circumstances. This document cannot be reproduced or redistributed outside of your institution without the written consent of PCBB.