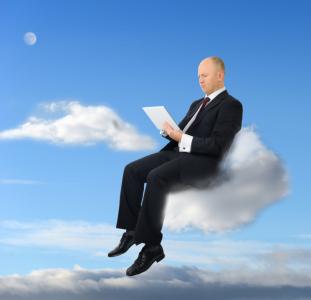 In the early 1990s, Procter & Gamble let the trademark on its White Cloud toilet paper lapse as it focused attention on its more expensive Charmin brand. Sensing opportunity, Wal-Mart quickly stepped in and resurrected the brand for its exclusive toilet paper line. Flash forward a decade or so and the Wal-Mart version continues to rate highly in consumer rankings, yet there's a fair amount of confusion surrounding the White Cloud name. There is White Cloud Electronic Cigarettes, WhiteCloud Analytics, White Cloud (private air) Charter and even Casino White Cloud.
Similarly, the proliferation of cloud-based services in the technology world has certainly created a cloud of confusion for banks. Broadly, cloud computing lets people use the Internet to tap into hardware, software and a range of related services on demand from powerful computers typically housed in remote locations. The benefits are multiple. Among other things, cloud computing can reduce cost, improve flexibility and scalability, increase efficiency and allow banks to serve customers faster.
After balking at the idea of cloud computing for many years, a number of banks are starting to explore the options further, particularly as it becomes more universally acceptable and as cloud-based systems proliferate. A recent study by the Cloud Security Alliance found that security professionals receive, on average, 10.6 requests each month for new cloud services; and 71% of companies now have a formal process for users to request new cloud services.
Common misconceptions, however, remain a hurdle to broader adoption. One common misperception is the belief that the data stored in the cloud is not secure. This may stem from a fundamental misunderstanding of the differences between the private and public clouds.
Public clouds allow users to access resources, such as applications and storage space, publicly over the Internet. Two popular examples of public clouds in action are Dropbox and Google Drive. By contrast, private cloud solutions service a single company and are managed in-house by an IT department. For banks exploring cloud computing, private cloud solutions are a regulatory necessity.
Private clouds have their challenges, but with due diligence, banks can find solutions that offer a high level of security and privacy. Indeed, large cloud providers often have more resources to monitor for breaches and handle issues that crop up than banks with smaller IT departments. Certainly they have numerous financial and reputational incentives to provide top-notch security.
As you're mulling this over, consider that data breaches often start within an organization and that the cloud itself isn't something to be feared--nor is it really a cloud. Many banks wrongly assume they can do nothing to help protect their data security in the cloud. Rather, banks can help to mitigate security risks by encrypting data, using secure networks and managing passwords properly. You can also make informed choices about what information gets stored in the cloud vs. what stays in-house.
Certainly, not all cloud applications are created equal, so do careful research before jumping in. Secure cloud applications should require multifactor authentication instead of just a username and password. They should also limit access only to certain personnel and employ strong data distribution controls.
Being able to separate the facts from fiction is critical to developing a cloud-based strategy before you go floating around in it. As you ponder whether cloud-based systems are right for your bank, try not to let misconceptions cloud your judgment.
Subscribe to the BID Daily Newsletter to have it delivered by email daily.

A survey by Consumer Reports finds 77% of respondents said they were highly satisfied with the service provided by smaller traditional banks that are more community based and tend to focus more on customer relationships.

A survey of students globally who are inclined to become bankers by Universum Talent and Deloitte finds top aspirations of this group are: professional training and development (53%), high future earnings (51%), leaders who will support development (48%), financial strength (46%) and a good reference for a future career (46%).

Cleveland Fed President Mester said the economy remains strong despite recent volatility and that the FOMC will continue to raise rates at a "gradual" pace.

Thomson Reuters reports worldwide M&A activity is down 23% this year vs. last year, due to investor concerns over falling oil prices, softening growth in China and the risk of a potential spillover to the financial sector.

Research by comScore finds smartphone users visit or use an average of 25 apps per month, but spend 80% of their time using their top 3 favorite apps.
Copyright 2018 PCBB. Information contained herein is based on sources we believe to be reliable, but its accuracy is not guaranteed. Customers should rely on their own outside counsel or accounting firm to address specific circumstances. This document cannot be reproduced or redistributed outside of your institution without the written consent of PCBB.