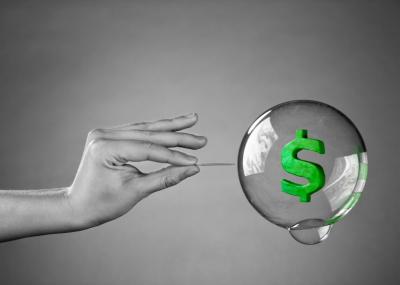 by Steve Brown
Share this Article:
You may not recognize the name David Vetter, but odds are good that you are familiar with his story. At the time of his birth in 1971, scientists had yet to discover a successful treatment for severe combined immunodeficiency (SCID) - the rare genetic disorder David was born with that essentially left him without a functioning immune system. This situation required David to be placed into a sterile chamber or "bubble" to ensure his survival. David became known as the "bubble boy." Despite all of this, David's family tried to give him the most normal life possible. In 1977, NASA scientists used the same technology for space suits to create a special suit that connected to David's bubble. It let him walk up to 8 feet from his bubble for the first time so he could explore more of the world. As the story shows and perhaps on a broader scale, the need to explore things seems innate to humans. Perhaps this is what is driving the financial industry to expend resources exploring bitcoin technology.
As you may recall, Bitcoin first piqued the interest of both the banking industry and the securities industry because of its ability to allow individuals or institutions to execute electronic currency exchanges without the involvement of an actual currency. Organized crime soon followed, which inevitably brought in regulators and law enforcement. While a global crackdown nearly ended the digital currency, in the financial world some still want to see it go mainstream so they are pouring in resources.
The idea behind the digital currency Bitcoin is interesting. Imagine a digital currency un-tethered to a specific country. Users can buy and sell things worldwide, as units of currency operate independently based on heavy duty encryption techniques. These techniques utilize something called "blockchain" technology.
Blockchain technology is really where the action is these days. You see, blockchain is a technology invention that records digital events in "blocks" that are linked together in a "chain." The blocks contain a full history of a transaction and are distributed out to participants within a system on an anonymous basis. Those participants can then update records based on a consensus majority to create a new block and data cannot be erased anywhere along the chain. In short, the process gives users the ability to see what is happening in the digital world, concisely, without compromising privacy or confidential details. Well beyond currency movement, it can be used to enhance security around health records, ownership documents, legal agreements, voting records and many other things. This is why so many large banks and securities firms are focusing energies on it.
Imagine the banking industry where technology helps protect security for cross-border payments, interbank payments, loans and the sale of securities. Initially, a handful of institutions such as Citibank, Goldman Sachs and UBS were independently investigating potential ways they could use the blockchain within their daily business activities. Now, however, a group of roughly 30 banks, securities firms and technology companies from around the world have joined forces in a consortium led by financial services technology firm R3. Their hope is to apply distributed ledger technologies to the global financial markets.
At the highest level, by tailoring the blockchain technology to a range of common transactions within the securities and banking industries, the group believes it will be able to reduce, and potentially eliminate, many of the inefficiencies that currently exist. In so doing, such exchanges will become more transparent and secure, while at the same time quicker and cheaper.
IBM, a member of the consortium, will contribute an extensive amount of coding and intellectual property to the project, while R3 is creating an architectural framework for financial transactions that will meet the global needs of banks and securities firms.
Given the resources and finances being devoted to tailoring the blockchain to the capital markets, a recent report on Bitcoin's technology by TABB Group says it is no longer a question of whether banks will use the technology, but when.
While community banks clearly don't have the resources to take part in the creation of this new technology, there is no doubt that you will be among the beneficiaries down the road. We will help keep you up on things in coming editions.
The bubble of blockchain technology is interesting and if it is truly as billed it could change the industry in unimaginable ways.
Subscribe to the BID Daily Newsletter to have it delivered by email daily.

CNN reports the three largest US banks (JPMorgan, Bank of America and Wells Fargo) earned more than $6B from ATM and overdraft fees last year, according to SNL Financial analysis.

Despite recent market turmoil, a new Reuters poll of over 90 economists predicts the Fed will raise rates 3x this year and that the US economy will grow 2.5%.

The CEO of JPMorgan indicated in his Q4 earnings discussion that the bank is "not forecasting a recession" and that the economy "looks pretty good at this point."

Goldman Sachs predicts this year will see greater volatility than the market has seen the past 3Ys, but that the economy is on more solid footing than most believe and GDP will be 2.00% to 2.75% this year.

Research by Fidelity finds 43% of couples in serious relationships don't know what their partners earn and 10% are off by at least $25,000.

Research by Ponemon finds that while 81% of respondents say their company has a data breach plan, only 34% say the plan is effective or very effective. That is better than the 30% who said that in 2014, but still shows plenty of room for improvement.