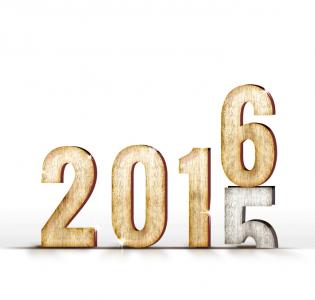 As we wrap up 2015, we're looking forward to another promising year for community banks and wish you all a prosperous and Happy New Year! It's time for our annual review of some of the most compelling events of this past year.
Finance: The biggest news of the year in finance came with the first Fed short-term interest rate hike in 10Ys! Now market players are deciding how to model rate risk once again as they focus energies on how to make money when rates rise modestly going forward. In addition: oil prices tanked to the lowest level in 11Ys; Greek voters rejected and then accepted terms of a bailout for the country; and the mobile payments space saw a frenzy of new mobile wallet launches, but the technology is still slow to gain traction with banks and consumers. Meanwhile, digital currency and blockchain technology interest is growing at the largest banks. Lastly, funding in fintech investments more than doubled.
Regulation: The Cybersecurity Act of 2015 was signed into law, providing incentives for businesses to hand over hacking threat data to the government without fear of facing customer lawsuits. At the same time, additional regulatory relief sought under Dodd-Frank included numerous changes for small and medium-sized banks, failed to pass Congress. Also noteworthy is that merchants are now fully liable for losses due to credit card fraud if they are not equipped with EMV chip-enabled payment terminals.
Pop Culture: Star Wars Episode VII: The Force Awakens dominated year-end box office numbers (and merchandise sales); a new Royal, Princess Charlotte, was born; the Kansas City Royals won the World Series; Deflategate was the most talked about pro football scandal; Caitlyn Jenner made her official debut; The Weeknd's breakout album, "Beauty Behind the Madness," was the most popular streamed album of the year; Adele became the fast trending musician in search engines and sold 5mm copies of her album "25" in just three weeks; after 7 seasons, the hit show "Mad Men" ended; the Supreme Court ruled in favor of gay marriage; the 2016 Presidential campaign heated up hot topics; and B.B. King, Yogi Berra, Frank Gifford, Leonard Nemoy, Wes Craven and Cecil the Lion were among notables who sadly passed away in 2015.
Science/Inventions: Doctors used virtual reality for the first time to clear a blocked artery in the heart of a male patient; Europe authorized the sale of the first completely artificial and self regulating heart (costs about $200k); British banks began offering finger vein biometric authentication technology to commercial and consumer customers; the New Horizons spacecraft reached Pluto; electric car ownership reached 1mm; a plane can now fold into a car; needle free vaccination patches; wearable keyboards made of fabric are invented to be sewn into clothes; animated e-books can be controlled by your voice; holograms can be displayed on your phone screen; iPhone can tell you where you parked your car; the smartphone can now be rolled up like an old newspaper and placed in your pocket;
Google can tell you where you are now based on photos it sees; digital healthcare grew as an option over traditional healthcare, with virtual doctor's visits, do-it-yourself diagnostic tests, monitoring devices, wearables and mobile apps; a machine was invented that converts poop into drinkable water; a syringe now exists that can seal a wound in under a minute using bio sponges; saltwater can be frozen using a new process that separates salt and leaves ice that can be then melted into drinking water; NASA provided the strongest evidence yet of the flow of liquid water on present day Mars; the first warm-blooded fish the size of a car tire was discovered; plants can now be used to power lamps; a robotic hand was created that generates a sense of touch; a temporary tattoo helps diabetics track blood sugar; Chinese scientists genetically modified human embryos; the FDA approved the first 3D-printed pill; July 2015 was the hottest month on Earth since 1880; a man paralyzed from the waist down walked with the aid of a computer that rerouted signals from his brain to electrodes on his knees; Tesla unveiled large batteries that can power homes & businesses; scientists slowed down the speed of light with a special mask that reshapes photons; researchers from Duke reported the first contracting muscle grown in a lab; & astronomers can accurately determine a star's age by how fast it spins.
Technology: Controversial hoverboards became widely popular and caught fire on social media and in homes; cell phone plans got cheaper; Wi-Fi connections on 67% of North American flights got 7x faster thanks to Gogo; Apple's iPhone 6S included a 3D Touch feature, enabling a right click of sorts on your smartphone; 1mm Americans cut the cord from their cable companies this year as streaming services like SlingTV tossed out long-term contracts; Disney unveiled "FaceDirector," new software that can sew together an actor's emotions in post production to avoid reshooting scenes; sense-and-avoid technology is now used in drones; and USB-C jacks can carry power, data, video and audio simultaneously to your phone, tablet and laptop.
Now we flip the page on our calendars and wish you and your bank a healthy and successful 2016. We look forward to what this fascinating world will bring us to talk about in next year's edition.
Subscribe to the BID Daily Newsletter to have it delivered by email daily.

Investors remain cautious after the spread between the 10Y Treasury and the 2Y declined to 117bps in recent trading. That is the tightest spread since Jan 2008. A backdrop of low global economic growth and little inflation has kept investors buying longer dated Treasuries, weighing down the longer yields. Meanwhile, the Fed is raising rates on the short end, pushing the 2Y yield slowly higher and compressing the spread between the two.

Bloomberg reports Swiss wealth manager Julius Baer Group has agreed to pay $547mm to settle a US criminal probe into how it assisted Americans in evading paying taxes.
Copyright 2018 PCBB. Information contained herein is based on sources we believe to be reliable, but its accuracy is not guaranteed. Customers should rely on their own outside counsel or accounting firm to address specific circumstances. This document cannot be reproduced or redistributed outside of your institution without the written consent of PCBB.