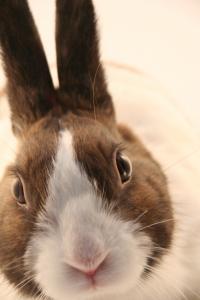 Bunker Hill Bunny is a Warner Brothers cartoon short, released in 1950. It stars the beloved carrot-crunching Bugs Bunny and the infamous rabbit-hater Yosemite Sam. Set in the time of the American Revolution, Bugs is an American Minuteman defending a paltry wooden fort against a heavily armed redcoat named Sam. Despite his relentless bombardment of Bugs, Sam is unable to outwit him. Ultimately, a thoroughly defeated Sam concedes to his enemy and defects, boldly declaring: "If you can't beat 'em, join 'em." At the end of the cartoon, Bugs and Sam march in lockstep for the cause of the American Independence.
This reminds us a bit of what is happening with banks and financial technology (fintech) players these days. More and more large banks are finding ways to partner with upstart companies, and it's something community banks are going to have to think more about as the fintech industry continues to mushroom.
Consider that a recent report by BNY Mellon points out that there are at least 4,000 start-ups active in the fintech space, with more than a dozen of these already valued at over $1B. Total investment in these types of ventures reached $12B in 2014, or about 3x what it was the year earlier.
Large banks are partnering with fintech players in a variety of ways. For example, JPMorgan Chase recently said it has forged a strategic partnership with OnDeck Capital that will get off the ground sometime in 2016. Reportedly, Chase will be offering small-dollar business loans to small businesses using OnDeck's underwriting technology. This will give Chase a platform and process for quick approvals and funding. The loans will reportedly be Chase-branded and remain on the bank's balance sheet, while OnDeck provides loan servicing under a white label program.
The announced deal follows another arrangement OnDeck has with BBVA Compass. That arrangement is more of a referral program, where BBVA sends borrowers to OnDeck to apply for a loan. Other alternative platforms have also formed similar arrangements with banks and we would expect to see these types of agreements grow over time.
KeyCorp took another path, meanwhile, by recently announcing a partnership with a company in the digital payments space. The company provides software enabling property management companies to accept mobile and digital payments. Earlier in 2015, the bank also invested in a PA-based health care payments provider and also a NC-based maker of software that digitizes paper invoices.
To be certain, when banks form partnerships or invest in other companies, they need to pay careful attention to risk. Regulators are going to be closely scrutinizing these types of deals, so banks have to be particularly mindful to monitor, measure and manage the risk closely.
Certainly as an industry, banks have always had a healthy level of spending on technology. But in the past, the dollars have largely gone to routine maintenance rather than innovation. This is slowly changing as banks seek to compete more effectively.
Clearly community banks do not have the deep pockets that big banks do, so any innovative technology spending must be carefully done. Your bank cannot fund major investments in promising start-ups or buy them, but you can still look for opportunity. As a starting point, keep tabs on the trends, monitor what the big banks are doing and think about all of this in context of your Boomer (now) and your Gen X/millennial (soon) customer base as you enhance your offerings.
Fintech disrupters are here to stay so banks need to respond proactively. Take a page from Yosemite Sam perhaps by thinking more along the lines of how to join the best technologies to your existing product and service offerings to keep customers engaged now and in the future. That's all for today folks.
Subscribe to the BID Daily Newsletter to have it delivered by email daily.

JPMorgan projects the Fed will raise rates 4x in 2016.

The CFPB is warning bankers that it will focus examiner efforts in the coming year on spending a lot of time looking at loan officer compensation plans, consumer disclosure requirements, ability to repay rules and marketing services agreements.

The OCC is warning banks it sees credit risk warning lights "flashing yellow" in bank lending portfolios. It also warned that continuing to ease underwriting standards is not a good idea. The OCC said banks are reaching for yield and growth, sometimes at the expense of sound underwriting, strong risk management and adequate loan loss reserves. Look for both OCC and non-OCC regulatory exam teams to take a closer look at these areas in upcoming exams.

Research by Bain finds large banks may end up closing up to 30% of branches in the next 3Ys to 5Ys, as more and more customers continue to switch to mobile self- service options and more nonbanks continue to enter the market.

The Chief Accountant at the SEC recommends US companies include International Financial Reporting Standards to their main financial statements, in a move toward adopting the global standard. The SEC staff is considering the recommendation and potential timing thereof.

A survey by Wells Fargo and Gallup finds 38% of small businesses have less debt now than 1Y ago.
Copyright 2018 PCBB. Information contained herein is based on sources we believe to be reliable, but its accuracy is not guaranteed. Customers should rely on their own outside counsel or accounting firm to address specific circumstances. This document cannot be reproduced or redistributed outside of your institution without the written consent of PCBB.