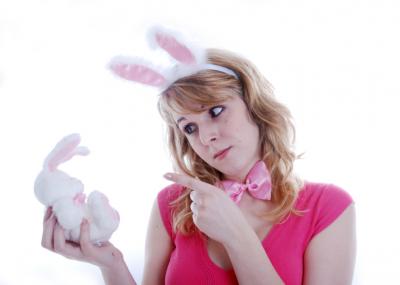 When the news initially broke of Playboy magazine's decision to stop running photos of completely nude women we simply assumed that "somebunny" had gotten the story wrong. After all, since Playboy first appeared back in 1953, such photos have been ubiquitous. Gradually over the years, the magazine has fallen victim to the power of technology and the Internet. There, people can just click to "every sex act imaginable for free," according to Playboy's CEO. That is why the magazine is changing tactics, in hopes a toned down magazine will help it reach a wider audience and boost performance.
Playboy's awareness of its need to change an approach that was no longer working also translates to banking. Consider research by Novantas that points out a huge decline in branch activity over the years. It finds the average number of teller transactions per month that occur in branches have declined from 7,600 in 2008 to 5,600 in 2013 and are projected to fall to 4,800 next year. That is a 37% decline in 8Ys.
Even worse, consider a similar analysis, but this time through the lens of FMSI that focused only on community bank data. It finds the average number of teller transactions per month that occur in community bank branches went from 6,600 in 2010 to 5,100 in 2015 or a decline of about 23% over this 5Y period. If that pace continues, by 2020 the average number of teller transactions will decline a whopping 41% vs. 2010.
Clearly, the pressure to operate a branch network continues to increase as customer behaviors shift. Here, look no further than the following: an estimated 25% of branches "are financially unaffordable" today (Novantas); customers on average visit a branch 85% less than they did 20Ys ago (Brett King); and only 23% of people now complete the majority of their banking transactions at a bank branch (Bank of America).
This makes sense when you consider the ease of online channels and the fact that most branch transactions are routine in nature. In fact, Bain & Company points out that about 90% of branch transactions are routine tasks that could easily be done online. This is supported by updated research by Bank of America that found people who visited a branch in the prior 6 months did so to make a deposit (64%), withdraw funds (46%), speak to someone (21%), resolve a problem (11%), open a new account (8%) or to close an account (4%). Almost all of these are easily handled online today.
The question many community bankers are struggling to resolve given cost pressures and customer behavioral changes is what to do about this when you are so deeply community based and embedded. Can you really close branches and shift to online delivery channels? If so, what will happen to the value of the franchise, how will customers view the move and what will happen to customer acquisition and retention efforts?
These are not easy questions to answer, but there is still time to adapt the model as these changes are happening over time. As such, our advice is to recognize that as you continually tinker with the model, track customer activity and test different delivery channels to see what works best for your own customers.
The key to enhancing performance over time is to really ramp up efforts to shift the branch culture to sales. This doesn't happen overnight, so you have to be patient and persistent, but it can happen and over time it will help performance. After all, there is a huge demographic shift underway right now and other research finds both Gen X and millennials seem to want to head for a branch to talk to someone when they are looking for advice on more complex financial matters (like a business transition). As the industry continues to transition in the coming years, our advice is to be sure to keep your clothes on as you test, learn and transition right along with it. Time to hop to it!
Subscribe to the BID Daily Newsletter to have it delivered by email daily.

A survey by the National Small Business Association finds 65% of small businesses offered employees health insurance in 2015 vs. 70% who did so the year prior. Business owners cited higher costs under Obamacare, which was echoed by the survey that found premiums increased for 90% of small businesses when they last renewed policies and 20% saw cost increases of 20% or more.

A PwC survey of corporate directors finds the most desirable director attributes are expertise in: financial (91%), industry (70%), operational (66%), risk management (62%), international (41%) and had more gender diversity (39%).

As the population ages, it is interesting to note that a study by Allianze Life Insurance Co of North America finds 89% of people ages 65Ys or older believe they can recognize financial abuse if it happened to them or to a family member or friend. Sadly, it is estimated that 20% of older adults have been victims of financial fraud. Meanwhile, research by MetLife finds 55% of elder financial abuse is committed by family members, caregivers or friends.

A new Bank Director survey finds the top 3 reasons respondents cited as factors that led their bank to walk away from buying a potential target institution were: parties could not agree on the deal price (60%), credit quality (46%) and culture at the target institution (35%). Meanwhile, potential sellers said they walked away for these top reasons: price was too low (71%), culture of the acquirer (67%) and concerns with the valuation of the buyer's stock (48%).
Copyright 2018 PCBB. Information contained herein is based on sources we believe to be reliable, but its accuracy is not guaranteed. Customers should rely on their own outside counsel or accounting firm to address specific circumstances. This document cannot be reproduced or redistributed outside of your institution without the written consent of PCBB.