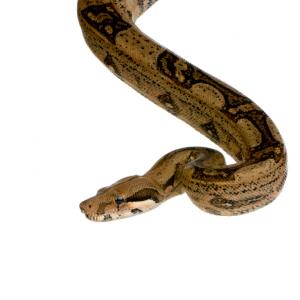 Le Petit Prince is a much beloved small book by French author Antoine de Saint-Exupery. It's a strange tale of an aviator who becomes stranded in the desert. There he meets a prince who has fallen to earth from a tiny asteroid. As a child, the pilot drew a picture of a boa constrictor that had consumed an elephant which could be seen inside the snake, although adults around him were certain the drawing was a poorly executed picture of a hat. When the child tried to explain it was an elephant, the adults advised that he should pursue a different hobby. The story is an exploration of the inability of adults to see and interpret what is obvious, and this follows the pilot until he meets the prince, who easily sees the elephant inside the snake.
Our first thought is that an elephant is a very large animal to fit inside a boa constrictor, but then again, it is often possible to hide something quite large inside another seemingly smaller object. For banks, this can happen with a rate-based deposit special. Most banks that run specials can end up with much more and less than they expected. This may at first seem like a contradiction, but read further and we will explain.
A deposit special by definition is a promotion with a higher interest rate than normally offered for a certain type of deposit. The typical goal is to attract new customers and their deposits. Here, if the bank sets the rate too low, new depositors will not be attracted so the rate is set artificially high to generate interest. The goal is to keep existing depositors from shifting lower cost funding to higher cost via the special. This is a delicate balance, as running a special and setting deposit rates is not a one-dimensional activity. How do you achieve balance?
To explore this, let's do the math two different ways. First a base scenario: A bank attracts $5mm in funding with a mix of new customers and existing. The bank is paying 1.00%, although the term is not important for this equation. The cost of funds (COF) in the bank has been 0.30% and the cost for wholesale money is 1.25%. In this example, 74% ($3.7mm) that comes into the bank is net new money, so the special is deemed to be pretty successful. The other 26% ($1.3mm), however, came from deposits already at the bank. Those deposits had a blended COF of 30 bps. So, if this 70 bps of increased expense is added to the COF of the $3.7mm new money, the effective or marginal COF for the new money to the bank is 1.25%. This effective or marginal COF is the same as the bank's wholesale alternative for incremental money, so it is the bank's point of indifference. If the wholesale alternative rate were lower than the special rate, then it would perhaps make more sense to simply use wholesale money for growth.
The second scenario is the opposite: Here 26% ($1.3mm) comes into the bank from outside sources at the 1.00% rate. In this case, the 70 bps COF increase on the 76% of existing money needs to be added to the cost of the $1.3mm, resulting in an effective COF on the net new money of 2.99%. Once you do this math you see a special like this is clearly bigger on the inside than it is on the outside.
So, as with our introductory story, when the adults in the bank recommend a deposit rate special in order to raise deposits, recall the story of the elephant inside the boa constrictor. It is important to know that more than one view is possible.
Running a deposit special may not be the best course of action for a bank that needs deposits, but sometimes this is the strategy a bank needs to employ. By using multi-dimensional planning to develop, execute, manage and construct strategies, the bank is likely to have a better outcome. Be sure your bank engages in the necessary planning prior to launching its next special or interest rate increase on its deposit products.
Subscribe to the BID Daily Newsletter to have it delivered by email daily.

Treasury yields climbed 7bps, as investors continue to ride on the coattails of positive jobs data, US GDP reports and a possible December rate hike.

A survey by Bank of America finds the top things millennials say stress them out are: not putting enough money into savings (43%); spending more than they should (30%); facing adulthood (28%); debt from student loans (27%); not planning or saving for retirement (24%) and the cost of raising a child (24%).

A former SEC Chairman said the fact that investment advisors are only examined every 11Ys is meaningless and can lead to fraud between exams. Can you even imagine as a banker an exam cycle this infrequent? Crazy.

A survey by TD Ameritrade finds 20% of millennials supported an aging parent over the past year and spent an average of $18,250 a year on medical bills and other expenses.

A Pew Research study finds 64% of those surveyed said there is no difference in honesty among men or women executives. Of note though, 31% said women executives were more ethical and honest while only 3% said men were.

A PwC survey of IT and security decision makers at companies worldwide finds 69% use cloud-based security services. Tools delivered through the cloud for security include: real-time monitoring and analytics (56%), authentication (55%), identity and access management (48%), threat intelligence (47%), and end-point protection (44%).

The median age of a first time homebuyer is now 33Ys old. That is notable when you consider the middle of the millennial generation is about 26Ys old.
Copyright 2018 PCBB. Information contained herein is based on sources we believe to be reliable, but its accuracy is not guaranteed. Customers should rely on their own outside counsel or accounting firm to address specific circumstances. This document cannot be reproduced or redistributed outside of your institution without the written consent of PCBB.