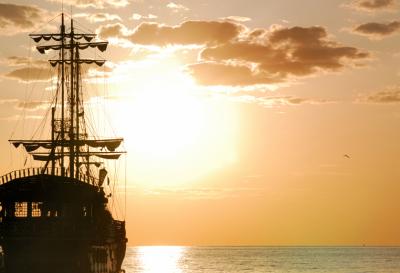 One of the most popular attractions in Savannah, Georgia, is The Pirates' House, a restaurant housed within the state's oldest building. Built in 1734, the structure was originally the home of a gardener who was charged with creating a garden to rival London's Chelsea Botanical Garden. But by 1754, plans for the garden were abandoned and the house was converted to an Inn and tavern for sailors visiting the city--many of whom were never seen or heard from again. That's because there are a series of tunnels that run below Savannah, which were used for reasons as varied as hiding dead bodies during a yellow fever epidemic, to hiding slaves as part of the famous Underground Railroad. Meanwhile, ship captains in need of crew and aware of the tunnel entrance within the tavern, would take advantage of drunken sailors by knocking them out and using the tunnels to transport them to their ships. Sailors would awaken the next morning to a new life--bondage on ships headed out to sea.
Much like unsuspecting sailors in the days of old, there is a possibility that Facebook users could eventually find their creditworthiness taken by an algorithm built into the online social network. This particular algorithm, which was originally created by Friendster to try to prevent spam and filter offensive content, is one of several programming patents that were sold to Facebook back in 2010. Recently, however, it was discovered that a small paragraph within this algorithm's patent says that it could also be used to help lenders determine the riskiness of extending loans to specific individuals, based entirely on electronic analysis of the people within their individual social network.
According to the patent filing, examining and analyzing the credit ratings of the people someone is linked to within their individual social network would provide lenders with better insight into that person's own ability to repay a loan.
The patent says that "If the average credit rating of these members is at least a minimum credit score, the lender continues to process the loan application. Otherwise, the loan application is rejected." So far, Facebook has remained silent about the patent and whether it has any plans to actually implement the algorithm, but news of the patent's wording has already fueled debate about whether or not it would be practical for lenders to implement it. One also has to wonder whether measuring loan applications in such a way would be any more valuable than the traditional metrics lenders have used to rate borrowers or not.
One obvious problem with such an algorithm is the fact that the average person's social network has expanded well beyond their closest friends. It now includes everyone from colleagues, to casual acquaintances and even friends of friends. Whether or not such an algorithm could be tweaked to successfully hone in solely on an individual's core friends remains unknown. Beyond that is the simple fact that just because two people are friends does not mean that they share the same income, spending patterns or overall credit histories. Thus, labeling loan applicants as risky borrowers may mean lost revenue for banks or increase risks.
Given consumers' fears about having their creditworthiness unfairly judged or tarred by software programs or algorithms, this area will remain an interesting one to monitor for developments. One way community banks can try and differentiate themselves is perhaps by emphasizing ties to real world connections to their customers. While it remains important for community banks to highlight online and mobile banking capabilities, it is perhaps just as important to remind customers that they are viewed as being more than just their credit scores. Doing so will also help customers understand they aren't just floating around on a digital sea of mindless data.
Subscribe to the BID Daily Newsletter to have it delivered by email daily.

Yields rose 4bps after the release of FOMC meeting minutes indicated confidence in the economy's growth and that a rate hike was not off the table for 2015.

A survey by the American Psychological Association on employee recognition finds: 51% of workers feel valued by the companies they work for; 47% say they feel recognition is provided fairly within their company; 46% say their company recognizes employees for individual job performance; and 36% say they haven't received any form of recognition in the last year.

The 9 largest insurance companies in the world will now have to hold more capital under new rules just released by global regulators. The idea is to ensure the industry is protected against the next crisis.

A survey by Oliver Wyman that incorporated 147mm debit card accounts from 70 financial institutions, finds debit card users on average make 2 ATM withdrawals per month vs. 3.4 in 2005--a 41% decline.

A survey by EY of employees worldwide finds: it has become more difficult to manage work-life balance; 67% said "flexibility stigma" at a company is a big reason why they would quit and 50% of all managers say they are working more than 40 hours per week.

ABC News reports the latest jobs reports shows the percentage of people in the workforce fell to 62.4%, the lowest level in 38Ys. Meanwhile, there are 5.9mm open jobs at the end of July, the highest level since record keeping began 15Ys ago.

Research by Randstad Technologies and IDG Research Services finds 67% of IT managers surveyed said they have or are working on a plan to address millennial technology needs. This is important because the study also found 78% said they have seen an increase in their company's mobile or remote workforce.
Copyright 2018 PCBB. Information contained herein is based on sources we believe to be reliable, but its accuracy is not guaranteed. Customers should rely on their own outside counsel or accounting firm to address specific circumstances. This document cannot be reproduced or redistributed outside of your institution without the written consent of PCBB.