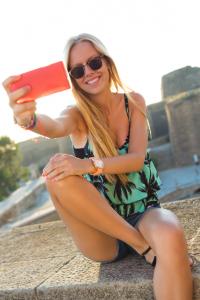 You may not have known it but the first time someone reportedly took a digital picture of themselves and posted it was in 2002. That is pretty recent, but it really exploded in 2010 when Apple introduced a smartphone with a front-facing camera. That made the trend popular and now you cannot walk around any major city without seeing people all over the place snapping selfies left and right. Millions of selfies are taken each day. In fact, a poll of British people way back in 2013 even found that 30% of photos people take are selfies.
No matter your opinion on snapping pictures of yourself, this trend is finding its way into the banking industry. Consider that MasterCard, Wells Fargo, USAA and others have even found a useful implementation of the selfie when it comes to facial recognition.
Earlier this year, USAA became the first major bank to offer facial recognition as a way to access the mobile app. The customer simply activates the app, then selects from a menu. The camera then analyzes the person's face, waits for them to blink (to be sure it isn't just a picture of a person) and then unlocks the app. As an extra feature, USAA takes things one step further and allows users to be recognized by their voice. Pretty nice if you ask us and definitely where things are heading.
For its part, MasterCard has also launched a pilot program entitled "Selfie Pay." This system too uses facial recognition through smartphone cameras to verify your identity. If all things go as expected, transactions will eventually be authenticated with your face and not with a microchip or PIN number. The idea is to reduce fraud and make things easier for the customer.
Likewise, Wells Fargo is circling the wagons around biometrics technology. The bank created a start-up accelerator to experiment with fingerprints, facial, eye and voice recognition. Since March 2015, 100 users have been testing facial and voice identification. The way it works is that the consumer stares at the phone, says a passphrase and repeats some random numbers. The app sends this information to Wells Fargo servers which compare it to the stored customer's profile for authentication. Wells also says it expects to give business customers the ability to log into their accounts using face and voice recognition technology in the first part of next year.
The primary reason for all of this is that passwords are just too weak to get the job done. Consider that studies find that more than 60% of people use the same password for all services and websites and about 45% only change their password once a year. Is it any wonder why cyber crime is so prevalent?
Certainly, biometrics can have problems. These can include background noise (voice), poor or too much lighting (selfie/facial), eyeglass glare and a variety of other factors.
That said, it is clear that no matter the method used, biometric banking is on the way and in the next few years will become common. In fact, Goode Intelligence predicts biometric authentication in banking will be the main method in the next 5Ys, so hold onto your hat because the digital wind is really blowing. Further, Goode indicates its research finds biometrics is being used in banking for not only authentication, but also KYC and AML. Getting rid of the password may take years to come, but it is neat to see other options explored as we move forward at the speed of the internet.
Subscribe to the BID Daily Newsletter to have it delivered by email daily.

Banks with trust departments are looking closely at the proposed Department of Labor rule released in April that modifies the definition of fiduciary under ERISA. The rule also modifies the definition of investment advice to include: eliminating the hurdle that investment advice be rendered on a regular basis to be considered fiduciary; providing any advice that may be considered in connection with investment decisions is now covered; adding that advice no longer needs to be provided pursuant to a mutual agreement; and that fairness opinions and appraisals are specifically included as covered types of investment advice. Looks like liability costs could rise for bankers.

Fox Business reports a study by Ed Assist finds 33% of Millennials want their employer to help them pay down debt (most often student debt). Given competition for quality employees maybe this is something community bank HR teams might want to consider.

Whitney Bank ($21.5B, MS) will acquire about $190mm in health care loans and a loan production office from United Community Bank ($8.2B, GA) for an undisclosed sum.

Research by Pepperdine University of privately held businesses finds people say their favorite way to get financing in order is from: a bank; equipment leasing; credit union; a grant and trade credit.

If you are tired of hearing about Millennials in research and news stories, you may be interested to note the Gen Z is now officially in the mix. This cohort was born between 1995 and 2012. They are even more into technology (use up to 5 screens); use more image than text; are focused on the future; and want to work for success. Now you know.
Copyright 2018 PCBB. Information contained herein is based on sources we believe to be reliable, but its accuracy is not guaranteed. Customers should rely on their own outside counsel or accounting firm to address specific circumstances. This document cannot be reproduced or redistributed outside of your institution without the written consent of PCBB.