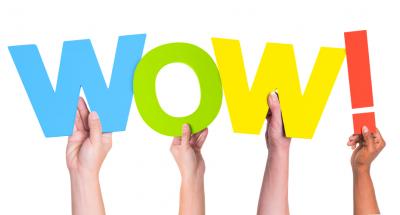 The Sensational Impact Of Rising Rates

It may be an anachronism to look forward to picking up a paper newspaper and reading it, but when traveling we sometimes enjoy spending time with a mug of coffee in our room before going out into the fast-paced world of banking. Things have really changed in the news world, shifting from paper to digital over the decades. Comic strips too have played an important role in that transition. Consider that back in the late 1890s news giants fought over exclusive rights to the most popular strips, one of which was known as The Yellow Kid. Things got so crazy back then that screaming headlines and cutthroat competition over the cartoon strip came to be known as "yellow journalism"--a term we still know and use today when we refer to sensationalism and crude exaggeration.
Whether electronic or paper version, there is still yellow journalism to be found well beyond the comic strip section. Everyone reading this publication knows that when it comes to advertising and marketing, banks must follow so many rules and regulations, that yellow journalism in this industry certainly isn't the norm when it comes to deposit specials. While normally more regulation is bad and weighs on the industry, we think it might be good in this case as the Fed prepares to raise rates. Here's why.
Consider that as rates rise, some bankers will be tempted to raise deposit rates--some more aggressively and sooner than others. Historically speaking in fact, deposit rates will usually creep higher in anticipation of Fed rate increases. In the two cycles of increasing Fed Funds rates in the last 20Ys, banks began increasing deposit rates, albeit slowly and gradually in advance of the initial rate hike. The intention is clear--to protect deposit balances by coming to market first with higher rates.
For now, the market seems to be in a quandary. That is due to a variety of reasons, including a lack of inflation and ongoing weakness in global economies to name a few. As for deposit rates, there are many factors to consider, including what to do if the anticipated rate increase does not occur or takes longer than expected. It is hard to imagine a bank being able to put the genie back in the bottle and lower deposit rates if they were to move higher and then try to move lower if the Fed in the end doesn't act for another 6 months. That is why so many have chosen to just sit and wait to see what happens.
This makes sense when you also consider how extreme the competition for loans is right now. Asset yields are coming down, so it seems insane to move deposit rates anywhere but down as well to try and maintain NIM. A bank that raises deposit rates in advance may pick up some deposits, but it further trains customers to be rate sensitive and it virtually guarantees it will be less competitive in this environment.
The worst outcome perhaps, is that the bank can wake up sleeping customers to the idea of higher deposit rates. For now, deposit customers have become accustomed to low and stagnant rates, so many analysts think they will be less likely to react to rate increases than they have in the past. We will have to wait and see what people do with their money, but you have to wonder why in the world any bank would want to encourage depositors to seek out higher rates in advance of any official rate move.
Be sure to plan out and carefully consider your deposit strategy in an environment of rising interest rates, even if we have to wait a little longer. The plan should take into account your bank's actual funding and liquidity situation, the nature of its deposits. Then, be sure to evaluate the impact of competitors who may react aggressively, sensationally and with crude exaggeration to truly prepare your team for what lies ahead.
Subscribe to the BID Daily Newsletter to have it delivered by email daily.

Treasury yields were unchanged as investors await the economic release of unemployment data. The result of which may impact the Fed's decision to raise interest rates.

A judge has ordered The Huntington National Bank ($69B, OH) to pay $72mm related to a fraudulent Ponzi scheme executed by one of its customers (Cyberco). The judge ruled Huntington failed to stop the fraud despite many illogical explanations provided by the company and that the bank "turned a blind eye" to allegations of fraud.

Research Now reports a survey of bank customers worldwide finds their top concern is data protection. Meanwhile, 70% said rewards programs are important to them and 90% say it is important for their banker to know them.

A former executive at TD Bank will reportedly plead guilty to wire fraud conspiracy, in a deal with prosecutors to settle charges for his role in a $1.2B Ponzi scheme. The executive reportedly told investors that their money was safe.

A Bank Director magazine survey finds bank holding company boards have a median of 10 directors, with 4 or 5 serving on each committee.

The Fed reports total credit and debit card spending in the U.S. in 2013 was $4T.

Regulators continue to warn bankers that many community banks that failed during the crisis had high concentrations of commercial real estate, especially in construction and land, and that funded the growth with wholesale funding sources. Bankers seeing loan growth in these areas should be sure to have strong risk management practices.

A survey by American Express finds 50% of small businesses say they had cash flow problems last year.
Copyright 2018 PCBB. Information contained herein is based on sources we believe to be reliable, but its accuracy is not guaranteed. Customers should rely on their own outside counsel or accounting firm to address specific circumstances. This document cannot be reproduced or redistributed outside of your institution without the written consent of PCBB.