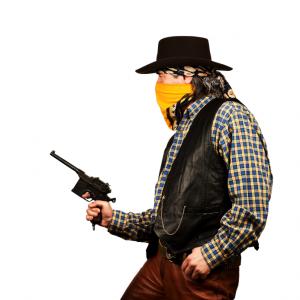 Gun Slinging For Customers And Deposits

You'd be hard pressed to find a grade school student who doesn't recognize Jesse James as one of the most famous outlaws of all time. James and his gang, which included his brother Frank, robbed countless banks, trains and stage coaches throughout the Midwest in the mid-1800s and eluded capture for 15 years. What fewer people know perhaps is that it was their December, 1869 robbery of Gallatin, Missouri's Daviess County Saving Association that brought notoriety to Jesse James. During that robbery Jesse shot and killed the bank's cashier, John Sheets, whom he reportedly mistakenly believed to be the militia officer who had killed his buddy "Bloody" Bill Anderson a few years earlier in the Civil War. Eventually, in April 1882, Jesse was killed by Robert Ford (a newly recruited member of his gang interested in collecting the reward offered for James' head).
We couldn't help but think about how things have changed in the past 133Ys when it comes to the relationship between banks and rewards. These days, the few rewards law officials usually offer are mostly for information leading to the capture of really bad people threatening the country (such as terrorists or people threatening national security). Meanwhile, banks have shifted their own reward activities away from criminals and towards offering customers a different sort of reward.
As community banks strive to compete with larger national banks, some have turned to reward checking accounts. The idea is that this is one way to attract new customers and maintain a hold on existing customers. Since market rates have been so low for so long, consumers are seeking opportunities to boost the return they can get vs. a more traditional savings account.
The question bankers face when considering this is whether or not such rewards checking accounts deliver a good return on investment or potentially lead to other issues.
To begin, most reward checking accounts require that customers first complete a list of requirements before they are eligible for higher interest rates. These raise awareness about the typical prerequisites that may include: maintaining a minimum balance; enrollment in online banking; getting e-statements; having a direct deposit; and a minimum of 12 monthly debit card transactions that don't require a pin number to name a few. These "triggers" all usually link to one another in order to get the higher interest rate by essentially "buying down" the cost of that rate paid when you adjust for the benefits received by the bank when customers do everything right. Under most programs, higher interest rates are only paid to customers who meet all of these criteria so over time some group of customers will not attain their objective as a direct result of action or inaction on their part.
A counterargument to such an approach is the customer frustration, the potential that when customers do everything right the cost can be as much as a 5Y CD rate. You may also be training customers to demand a higher rate based on the things they feel they are doing with your bank.
Given these potential costs and risks, community banks should seriously consider everything in the mix just as you would with any other potential opportunity you are thinking about. In the end, you may even decide that chasing reward-oriented customers might bring results or it might lead to some unanticipated results. All reasons to do the work up front, to pilot test and to continually review assumptions and results over time.
Times may not be as tough as in the Jesse James era from the mid 1800's when people lived an average of about 40Ys, but they remain difficult nonetheless - particularly in banking.
Subscribe to the BID Daily Newsletter to have it delivered by email daily.

Yields continued to soften, dropping 6bps at the end of last week, as investors worry over global markets.

Regulatory agencies have recently given speeches stating they expect boards and senior management to have strong ethical standards and to set the tone from the top.

The RMA reports that senior FDIC officials say they expect boards and management to be sure the corporate code of conduct or ethics policies are periodically updated and communicated to employees. Such policies should ensure the integrity of records; provide for strong audit and internal controls; avoid self dealing; safeguard critical information; provide for candor in dealing with auditors, examiners and legal counsel; observe applicable laws and regulations; implement appropriate background checks; involve internal auditors to monitor adherence; provide a mechanism to report questionable activity; outline penalties for a breach of policy; provide periodic training and acknowledgement of the policy; and periodically update the policy to reflect new business activities.

Reuters reports Honda has received a green light from the California Department of Motor Vehicles to test drive autonomous vehicles on public roads. CA is one of 4 states including MI, FL and NV that allow driverless cars and Honda is the 10th company to be approved in CA

Various news sources indicate 12 large banks, the ISDA and Markit have agreed to pay a total of $1.87B to settle allegations they conspired to block competition in and control the market for credit derivatives.

Research by Pepperdine University of privately held businesses finds the top 7 sources of financing are: loan from a bank (36%), friends and family (22%), business credit card (22%), personal loan (17%), personal credit card (15%), trade credit (12%) and equipment leasing (12%).
Copyright 2018 PCBB. Information contained herein is based on sources we believe to be reliable, but its accuracy is not guaranteed. Customers should rely on their own outside counsel or accounting firm to address specific circumstances. This document cannot be reproduced or redistributed outside of your institution without the written consent of PCBB.