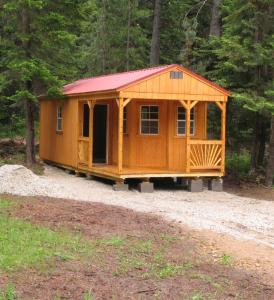 Of Tiny Houses And Community Banking

We are not sure what is going on but more people seem to be trying to squeeze themselves into ever smaller houses. Consider the trend focused on the tiny house movement, whereby a house is so small it basically will fit on the back of a trailer. Wait, aren't those called mobile homes? Anyway, this trend is all over cable these days with people moving into homes as small as 120 square feet. These people are practicing extreme downsizing, as they beg for a life less-cluttered and extremely simple. But of course, the path to the little house is not paved only with flowers and good intentions. After all, it is challenging to build a small habitat and live on vegetables home grown in a little garden.
The beauty for some in what is small is a parallel to the banking industry perhaps right now. In fact, the Conference of State Bank Supervisors recently organized a competition open to students from a variety of universities. Their mission was to study community banks around them to understand which ones had done the best during the financial crisis.
At the end of the competition, students from Utah won with their case study of Bank of American Fork. This bank survived the mortgage nightmare by creating a separate fund to buy foreclosed properties. The Bank of American Fork was founded in 1913, is south of Salt Lake City and has $1.1B in assets. Its survival is important as well because 6 of 29 community banks in Utah closed between 2009 and 2011.
In their report, the students found that the Bank of American Fork thrived by pro-actively taking quick initiatives to reverse the effect of the crisis. Like many other financial institutions, the bank found itself with too many commercial real estate loans, so it shifted gears. In 2008, teams of executives, board members and loan officers decided to meet every other week to assess their situation. In so doing they got rid of non-performing assets, wrote down bad loans and reallocated funds to profitable areas, while there was still capital to reallocate.
Then one day, the student research found out that the CEO of the bank got a phone call from a relative, interested in buying real estate given that prices were so low. It gave that president an idea: create an investment fund, separate from the bank, to buy foreclosed properties. In so doing, investors with a longer term horizon could wait for the eventual increase in property value and the bank could quickly move bad assets off its books.
These steps and others led this nimble community bank to not only survive the financial crisis, but to come out of it perhaps faster and less scarred by the events in question.
The bank learned many valuable lessons during the crisis certainly (as did many other community banks that survived), but one of the biggest was perhaps that decisive action pays off. The bank tightened its cost belt, while it still set aside enough money to create new products and launch marketing campaigns to promote them.
The Bank of American Fork story will be soon presented at the Annual Community Bank Research and Policy Conference and a new Competition of the Conference of State Bank Supervisors is on its way. We cannot wait to hear how community bankers out there have launched other brave experiments in order to change the business model in this rapidly shifting industry.
As for us, we are not yet ready to move into a house the size of a shoe box, but we do find fun in seeing how this trend will eventually end up. Until then, we'll just watch and wait to see.
Subscribe to the BID Daily Newsletter to have it delivered by email daily.

Yields finished unchanged as the market awaits today's announcement by the FOMC.

What will the Fed do? Announcement at 11:00PT and press conference to follow.

Bank of America said it will now offer fingerprint sign-in capabilities through its mobile banking app to Android, iPhone and iPad customers. The feature allows access to the most common functionality of the app without the additional need for a passcode.

Visa has introduced a technology framework that would support biometrics to be used with EMV chip cards rolling out this year. Bio technology types supported would include voice, eye, facial, palm and finger print.

The Conference of State Bank Supervisors announced it has completed a model regulatory framework for the virtual currency industry to help states better regulate such money businesses.

As the Fed prepares to raise interest rates, it is interesting to read in the Wall Street Journal that US Bank estimates up to 70% of its workforce in affected positions have never worked in a rising-rate environment.

Facebook reportedly is preparing to release a "dislike" button that will allow users to express sympathy with their friends on the social media site. We wonder if the button will also be used to dislike businesses advertising on the site.

CNBC reports an analyst with The Lindsey Group indicates the odds of a global recession taking hold in the next 20 months now exceeds better than 50%. The analyst cites weakness overseas in global economies.

The OECD has lowered its global economic forecast, citing the impact of China and weakness in commodities (mostly oil) as the main risks. The group cut its 2015 global growth forecast to 3.0% from 3.1% in June and reduced its 2016 forecast to 3.6% from 3.8% prior.
Copyright 2018 PCBB. Information contained herein is based on sources we believe to be reliable, but its accuracy is not guaranteed. Customers should rely on their own outside counsel or accounting firm to address specific circumstances. This document cannot be reproduced or redistributed outside of your institution without the written consent of PCBB.