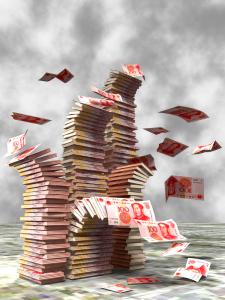 The Value Of Devaluation

It's been hard to ignore recent market volatility and earlier this week, we wrote about China's efforts to devalue its currency. The moves by the Chinese Central Bank have destabilized markets throughout the world, and while this volatility is not entirely due to China's efforts to control its currency in order to combat slowing economic growth, it is at least in part. The volatility has particularly been in response to the implications of China reverting to sledge hammer currency actions it had mostly moved away from in recent years, as its economy has matured. The world is wondering if China is stepping away from a more free market approach and even rejecting the idea of a more diverse, consumer driven economy.
Currencies fluctuate in a variety of ways, but typically in response to various internal, external or global macroeconomic forces. If a country has too much debt, has problems sustaining its economic growth or problems with inflation, then currencies tend to depreciate - each unit is worth less than before in comparison with other currencies. Currencies can also appreciate in comparison with others and this happens when one country's economy is stronger than others (like is the case with the US right now) or if it is considered a safe-haven, a stable investment in an otherwise volatile world. This role is often played by the Swiss.
In the 1960s, there was a system of fixed currency exchange rates called the Bretton Woods system which maintained prescribed margins for exchange rates and was the primary toolkit of central banks. Since the mid-1970s, the Bretton Woods system went out of use and IMF member countries have used whatever method they have felt was most effective, allowing currencies to float freely, pegging to another currency or a basket of currencies, or joining a currency bloc or a monetary union.
China pegged its currency to the US dollar for many years, which was viewed as a means of keeping the value of the yuan artificially low and Chinese goods cheap. More recently China has pegged to a basket of currencies where the value has been allowed to float a bit more freely. With a slowing economy, China has stepped up efforts to weaken the currency even more than has naturally occurred.
So how do countries manipulate their currencies? Sterilized intervention attempts to influence the exchange rate without increasing or decreasing the monetary base, but is generally considered to not be terribly effective. Non-sterilized intervention is more common, more effective and is achieved by either purchasing or selling foreign money or bonds with domestic currency. A country aiming to drive its exchange rate down would purchase foreign currency, causing an excess supply of domestic currency (driving the price down) and creating more demand for the foreign currency, driving its value up. Another means is indirect intervention, usually policy initiatives such as taxes or restrictions on international asset transactions or currency exchange controls. The Chinese most often use non-sterilized intervention for short term manipulation but also indirect intervention as a matter of course.
Community bankers going about their daily business may search for relevance in their world to global currency fluctuations. They need look no further than policy tightening from the Federal Reserve which may not occur in September as was widely expected, due to the recent volatility in the markets. In addition to interest rates, any businesses in your bank's market footprint that import or export will be affected. American made goods, finished or components, will be more expensive and less competitive as the US is even more of a safe haven than before. Imported goods will be less expensive, which will benefit some businesses. The drop in commodity prices, especially oil, has broad effects - good for consumers, bad for producers and reflects expected lack of demand (slow economic growth) worldwide.
In the end, bank customers are hearing lots of noise from every media source about panic, photos of shell-shocked Wall St traders on the front page of newspapers. Our customers need to be reminded that the world is not coming to an end, that their deposits in the bank are still insured, that the US banking system is considered to be the safest place to put money in the world. Step out of your office and into the lobby and talk to your people. They could probably use a little reassuring right now.
Subscribe to the BID Daily Newsletter to have it delivered by email daily.

Release of the PCE deflator, the Fed's favorite inflation index, but focus will remain on international markets after a wild week.

Fed NY Governor Dudley confirmed market expectations that the Sep rate hike by the Fed was probably off the table when he said yesterday in a speech that it was now "less compelling" than it was "a few weeks ago."

A Deloitte survey of business leaders finds the following are the main growth strategies over the next 12 months: growing organically in existing markets (36%); developing new products and services (15%); strategic alliances and collaborative projects (13%); and mergers and acquisitions (12%).

Chinese investment bank CITIC Securities is reportedly closing in on acquiring Russell Investments in a $1.8B deal to break into the US investment market.

A study by Tower Watson finds companies that automatically enroll employees in retirement plans that have more than 80% participation rates in defined contribution plans reached 64% in 2014 vs. only 50% in 2013.

Research finds that as of Q1 2015, about 85% of college-educated 25- to 34-year-olds were employed vs. 67% of those who only had a high school degree or less.
Copyright 2018 PCBB. Information contained herein is based on sources we believe to be reliable, but its accuracy is not guaranteed. Customers should rely on their own outside counsel or accounting firm to address specific circumstances. This document cannot be reproduced or redistributed outside of your institution without the written consent of PCBB.