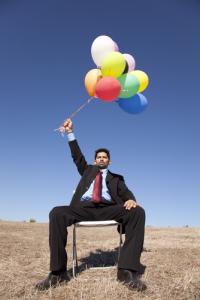 When Canadian Daniel Boria wanted to drum up publicity for his all natural cleaning solution company he decided traditional advertising methods just weren't good enough. Instead, Boria decided he was going to parachute with a sign bearing his company's name into the middle of the Calgary Stampede, an annual rodeo event that attracts more than 1mm people. After contacting multiple airplane and helicopter companies, Boria discovered that the rodeo was located within a no-fly zone. Still determined to carry out his plan, he instead attached 110 helium filled balloons to a plastic lawn chair and took to the sky equipped only with a parachute and an oxygen tank. When intense winds blew him off course he ultimately had to parachute. Luckily, he landed in an open area, but unluckily, he was greeted by police who arrested him.
While Boria was able to put his publicity stunt into motion before the law ultimately caught up with him, community banks are discovering that they need to be prepared in advance to address regulators' fears about potential systemic risks if they are considering a merger or acquisition.
Though many of the regulations within Dodd-Frank were initially created to prevent damage that the failure of systemically important financial institutions could cause for the US and worldwide economies, banking regulators must also apply such concerns to even the smallest of deals. As a result, regulatory consideration of the potential risk has slowed M&A activity among community banks.
Dodd-Frank is the gift that keeps on giving for community banks, as it has added yet another metric that regulators must consider - the possibility that an M&A deal could create systemic risk to the US banking or financial system. These elements must be considered before any such deals can be given the go ahead. Among the specific issues Dodd-Frank requires regulators to consider for M&A deals between banks is the size of the resulting bank after the two entities have merged and the extent to which the new institution would add to the complexity of the financial system, plus the bank's CRA ratings and financial stability as a combined entity. As a result, the Fed now requires all M&A deal applicants, regardless of size, to address the issue of systemic risk. M&A applicants must lay out why they believe their proposed deal would not result in a concentration of resources within a specific segment of the market or have a negative effect on competition.
Though this added burden of proof could mean delay for M&A deals, regulators mostly view deals involving the acquisition of an institution under $2B to be outside the window of systemic risk. According to the Fed around smaller deals, acquisitions in this size range generally "will not pose significant risks to the financial stability of the United States absent evidence that the transaction would result in a significant increase in interconnectedness, complexity, cross-border activities, or other risk factors".
While this is a positive sign for smaller deals, the Fed is only one of many layers. The CFPB is weighing in on certain M&A deals, as are other regulators and all institutions involved must be compliant with multiple standards.
For our part, we would not recommend community banks get a lawn chair and a bunch of helium balloons with the idea of circumventing the rules, as it can be catastrophic. In the end, the rules are the rules and Dodd Frank continues to layer in complexity for community bankers, so your best approach is to just prepare and understand what you have to do.
Subscribe to the BID Daily Newsletter to have it delivered by email daily.

Ugly day with a drop of over 530 points on the Dow due to China concerns and falling commodity prices. Treasury yields fell 3 to 4bps.

No important economic releases, all eyes will be on commodity prices and overseas markets.

The latest FOMC minutes show 1 member wants to raise rates now, while the remaining group sees "the economic conditions for beginning to increase the target range for the federal funds rate as having been met or were confident that they would be met shortly." Some in the market say the wording points to a Dec lift off, while others say it indicates the Fed will raise rates in Sep.

The Fed indicates a 1% loss in GDP usually results in a 4% reduction in housing prices.

Forbes reports LinkedIn research finds 30% of users who search for people on its platform each month view coworker profiles and 58% say they could do their job better if they could search for coworkers with specific skills.

Research by RealtyTrac finds the average time it takes to foreclose on a home (loan default to repossession) is 629 days.

Promontory Financial Group has agreed to a $15mm settlement and a ban of 6 months from accepting certain consulting engagements with banks in New York, following its work as a consultant for Standard Chartered related to transactions with banned countries.
Copyright 2018 PCBB. Information contained herein is based on sources we believe to be reliable, but its accuracy is not guaranteed. Customers should rely on their own outside counsel or accounting firm to address specific circumstances. This document cannot be reproduced or redistributed outside of your institution without the written consent of PCBB.