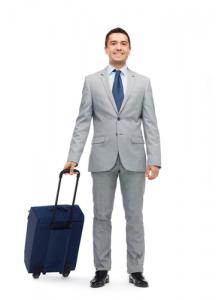 We regularly travel around the country visiting banks and attending banking conferences, so we know a thing or two about traveling. This is a big country, so air travel is required much of the time and while it is rarely a pleasure, we pretty much have the system down. Most regular business travelers know how to take only what is necessary and to be sure it fits into luggage that meets the carry-on requirements. So for all travelers out there, we wanted to weigh in on the unwelcome news last week from the IATA, an association of the world's big airlines. They announced new recommendations for a global standardized size for allowable carry-ons. It probably comes as no surprise that the new recommendation shrinks the size of what is allowed from an already small size to something about 20% less. This means that people will either be packing lighter or checking more bags, which at $25 per bag will be a nice fee generator for the airlines.
Similarly, there is a notably tighter supply of Treasury bonds of late and the lack of depth in the market has caught the eye of bond traders and fixed income strategists. Wait a minute, haven't bond yields been increasing lately and therefore the market is selling off? This is true, but the volume of Treasuries and mortgage backed securities (MBS) that are turning over is significantly less than what used to be typical. One NY trader characterized the market as "not functioning as normal".
Regulators seem to be content to just monitor things for now until fluctuations become even more significant, but they are paying attention. There has been a lack of supply for some time now, and at least part of its origin can be attributed to the enormous quantity of bonds that the Fed bought in its quantitative easing programs. In addition to Treasuries, the Fed purchased large quantities of MBS and many bank portfolio managers were impacted by that lack of supply in their efforts to purchase bonds that met bank policy guidelines. In addition to Fed purchases, foreign central banks have been buying Treasuries to bolster their currency reserves. Finally, higher corporate debt issuance, lower inventories and low interest rates have contributed to an increase in volatility.
How significant is the drop in volume? Deutsche Bank estimates that the average proportion of the market that changes hands on a daily basis has slumped about 70% since its peak before the crisis. JP Morgan estimates that Treasury volume for 10Y notes has averaged about $171mm daily over the last 8Ys including during the financial crisis, but over the course of the past year, has averaged only $116mm. This means is that the ability of investors to move large chunks easily without causing significant market moves is diminished. In fact, there was one day last week when PIMCO, the world's largest fixed income manager, sold large quantities of Treasuries and yields rocketed. Whether this was caused only by PIMCO's sales or by copycat investors as well, the effect on yields was greater than one would expect in what is considered the world's most liquid market. The rise in yields has made Treasuries more attractive to purchase for banks and for other investors though, and last week's auctions saw strong demand.
Community bankers mostly aren't actively trading the fixed income market, so daily volatility isn't an enormous concern at least at first glance. However, it should be noted that interest rate volatility will affect community banks as both lending and deposit rates move as the markets (and large banks in turn) move. Bankers should look beyond the noise, but expect both volatility and a general upward trend as the Fed prepares to begin a tightening cycle.
Who would ever think that the Treasury market would become like space on an airplane - in tight supply? If the new carry-on recommendations are implemented, we fear that we will be bringing fewer clean shirts to conferences, so it looks like we will have to be much more careful when eating.
Subscribe to the BID Daily Newsletter to have it delivered by email daily.

Yields dropped 3 to 4bps as housing starts disappointed the market and Greek talks reached an impasse.

The market awaits the Fed's policy statement at 2:00ET plus a press conference and updated charts from the FOMC.

Reuters reports 20 of the world's largest banks have paid more than $235B so far in fines and compensation in the past 7Ys related to issues around the credit crisis. Interestingly, Bank of America has paid out 2x as much as any other bank (at $80B).

The Fed indicates the annual savings in gasoline costs has been about $700 per household on average.

A survey by TINYpulse from employees at more than 500 companies finds 34% of the happiest employees say their peers and colleagues are what drive their workplace satisfaction. Having events now and then that allow employees to interact and have fun still make good sense it would appear.
Copyright 2018 PCBB. Information contained herein is based on sources we believe to be reliable, but its accuracy is not guaranteed. Customers should rely on their own outside counsel or accounting firm to address specific circumstances. This document cannot be reproduced or redistributed outside of your institution without the written consent of PCBB.