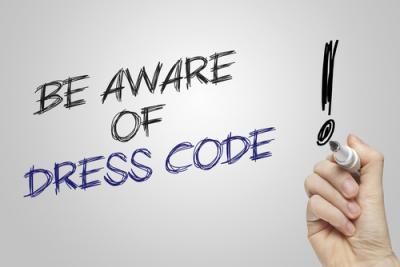 What Does The First Dude Wear?

by Steve Brown
Share this Article:
Hillary Clinton used an online video to announce her plans to run in 2016. Following that, countless media outlets have dissected virtually every aspect of the news. One that caught our eye was a discussion of the role her husband would play if she were to be elected. It would require re-creating the role of the president's spouse. The media has put forth a myriad of suggestions for how to reshape the first lady role, from "first man," to "first husband" and even "first dude". Would tabloids discuss in catty detail what the first dude wears to every official event? No matter who you might vote for, the discussion reminds us of the importance of dress codes and the social norms in banking.
Certainly, the industry dress code may lack the glitz and glamour of the haute couture garments that populate state dinners, but we couldn't help but think about how wearing a tie often seems old school and out of place today.
Glancing over the crowd at a recent bank conference, we noted the old school gender gap that still pervades much of the banking industry's senior management and boards. Despite the major strides women have made in the business world over the past few years, women are still in the minority when it comes to board positions. This is even more so in the US than most other developed countries. In fact, as of the end of 2014, just over 19% of board seats on S&P 500 companies were held by women, according to Catalyst's most recent global census of women board directors. That trend, however, may soon change.
In early March, the first major country took direct action when Germany's parliament passed a bill that will require listed companies to fill 30% of the seats on their supervisory boards with female non-executive directors beginning in 2016. Given that mounting evidence demonstrates adding women to boards not only helps chip away at gender inequality, but that it may also strengthen the overall performance of boards, there is hope that gender imbalance will decrease.
In the past couple of years, multiple studies have examined the correlation between companies with a greater than average number of women on their boards and the performance of those companies. The evidence suggests that a better gender balance is beneficial. In fact, the largest such study to date (published by Credit Suisse) not only found that companies with women on their boards perform better than those without women, but that having a significant female representation at the executive level also translates to higher valuations, greater returns on equity, stronger stock prices and better dividends.
The importance of women in the industry shouldn't be news for community banks, as countless studies have shown that women make the majority of major financial decisions within most households & therefore are valued community bank customers.
Given mounting evidence that the financial savviness of women is by no means limited to managing households, community banks would be well served to not only embrace the addition of qualified women to their boards and to publicize any such additions within their communities. Just as women represent an ever-increasing number of the financial decision makers for households, women are also more likely to determine the bank a household uses for everything from day-to-day banking and mortgages to college savings accounts and beyond.
No matter what dress code your bank has, consider how the changing face of your customers should be reflected at the management and board levels of your bank as well.
Subscribe to the BID Daily Newsletter to have it delivered by email daily.

Smaller Loans Can Be Profitable Too

The CFPB has told Fiserv to hand over anonymous data related to financial institution overdraft programs, as it seeks to gather more data. Fiserv is reportedly warning customers that possible price increases could follow given the cost to comply with the request.

CNBC reports the Department of Education said it plans to regulate debit cards through colleges and universities. The DEA is moving to expand options for students, target high fees and seek to modify a system where schools get fees for privately labeled debit cards tied to accounts for financial aid deposits.

Studies find that today, about 62% of email is first opened on a mobile device.

Research finds about 79% of millennials would rather be mobile than static while working.

The DOD is warning banks that a Russian cyber hacking group is planning a large scale attack on global banks, after reportedly already stealing up to $900mm in the past year.