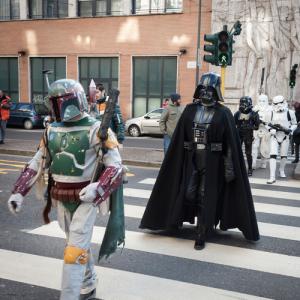 Every so often a group of community bankers will send in ideas for this publication and we consider all of them. We really enjoy it when bankers talk to us about the best way to lead into the publication or tell us a story about an issue they face at the bank. For instance, recently a banker regaled us with a story of how they were heading to a Star Wars convention and he was dressed as Chewbacca. The problem was that wearing a sweaty costume for 5 hours with kids in the back seat, screaming all the way to San Diego and then back to Seattle was brutal. Whether the kids were scared of seeing their parent in a costume or just didn't want to use their Kindle in the back seat, the driver's dreams quickly turned to visions of Hawaii as he tried to keep his wits. Suffice it to say that while most would not go through what this banker did for any movie franchise, we too are big fans of the Star Wars movies with all their mythical creatures.
Along those lines, we also recently came across a documentary about Jabba the Hut. You may recall that Jabba (featured in Return of the Jedi) looks like an enormous slug with cat eyes and a toad mouth. This film was made in 1983, not a time of highly developed special effects, and so it turns out that Jabba was actually an enormous puppet operated by three people crammed inside a fiberglass and latex body. One man operated the right arm and jaw (responsible for lip syncing), another operated the left arm, moved the body and the tongue (remember Jabba gobbling down a frog). The tail was operated by a third person. In modern times, we are sure Jabba would be created virtually with animation, but considering the times, the execution of movements by the large mollusk is truly masterful. The documentary estimates that Jabba was the most expensive puppet ever made.
What does Jabba the Hut have to do with banking you might wonder? Well, large asset management funds can be similarly cumbersome and awkward to move quickly and in coordination. The concern for bankers is that when interest rates begin to rise, bond funds in particular may be unable to stand the stress and that could lead to spillover or turmoil. This could be one reason there has been a movement underway for some years by global regulators to boost supervision of asset managers. A tough new paper has been released recently with recommendations to increase asset manager safety. In addition to the policy paper, The Financial Stability Board and the International Organization of Securities Commissions have a plan to identify systemically important asset management funds in order to require them to control their risks.
We will see if this gets traction, but for their part, the funds insist they are secure. They note that there was a cycle of Fed rate increases beginning in 1994 during which bond funds saw outflows of around 5%, which they handled with no problem.
The counter argument is that 20Ys later, things are really different. First there is the size issue - the US mutual fund market which accounts for about half the global total has doubled in size since 2008. But since 1994 and the last Fed tightening cycle, the amount in bond funds has grown six-fold. The fund companies themselves have exploded in size too, with the biggest BlackRock managing $4.7T. The funds do claim to have 7% cash, more than the 6% they held in 1994, but in truth, a lot of this cash is in "cash substitutes" (invested in exchange traded funds). In a wholesale selloff, these vehicles are likely to be a lot less liquid than actual cash.
Getting regulations and controls in place for these enormous funds has been as difficult as Jabba the Hut was for the Jedi and there may be peril in store for the financial system if bond fund investors sell off en masse, so preparation is important. Otherwise, investors may find themselves on the dark side of the force and pulled into the world of the Sith.
Subscribe to the BID Daily Newsletter to have it delivered by email daily.

Despite the fact that manufacturing and construction numbers came in slightly weaker than expected, Treasury yields rose 3bps by the close of the session.

Yields are currently up 1bp this morning ahead of Factory Orders.

1) MVB Bank, Inc ($1.1B, WV) will acquire 2 branches in WV from Susquehanna Bank ($18.5B, PA) for an undisclosed sum. The branches have about $69mm in deposits and $17mm in loans and the sale is part of a divestiture related to Susquehanna's merger with BB&T. 2) South State Bank ($7.8B, SC) said it will consolidate or sell 14 branches over the coming quarters, as it seeks to improve efficiencies, drive organic growth and deploy excess liquidity. The identified locations have $208mm in deposits.

Bank of America Merrill Lynch's 2015 CFO Outlook survey of 600+ US corporate financial executives finds mid-sized firms say their growth strategies this year are: market penetration (82%); market expansion (74%); introduction of new products (56%); merger or acquisition (22%) and any of these 4 strategies (96%).
Copyright 2018 PCBB. Information contained herein is based on sources we believe to be reliable, but its accuracy is not guaranteed. Customers should rely on their own outside counsel or accounting firm to address specific circumstances. This document cannot be reproduced or redistributed outside of your institution without the written consent of PCBB.