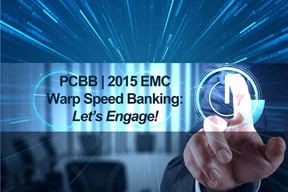 We are reporting from the PCBB Executive Management Conference in San Francisco, and we had interesting and informative presentations regarding current and upcoming regulatory issues.
Jim McAlpin of Bryan Cave noted that regulatory focus almost always follows economic concerns and regulators are not surprisingly looking towards loan concentrations, interest rate risk and potential asset quality problems. There is also special focus on banks that service the oil industry and operate in regions in the US that are heavily dependent upon the production of oil. Two other areas of focus: CRE has experienced a big resurgence in some rapidly growing areas and this naturally moves banks who operate in those markets towards loan portfolio concentrations. There has also been a surge in multi-family and mixed use loans, and some aspects of a bubble are becoming evident.
What should banks do? Document your bank's policies with extra care in the areas that regulators have expressed concern, and be absolutely certain to document any exceptions to your policies. In the end, the buck stops with the board of the bank. Start with sound policies and in addition, the board needs to have deep understanding of the risk profile of the bank. The board also needs to understand business lines of the bank below the 30K foot level, truly understand both the risks and opportunities that originate with product lines, customers and the general direction of business in the bank.
Michael Lundberg of McGladrey spoke on the new accounting rules coming down the road associated with the current expected loss model (CECL), which will fundamentally change the way that banks calculate their loss reserves. CECL will apply to all financial assets measured at amortized cost including loans, leases and HTM securities. The biggest difference from the present calculation is that all losses that have occurred or could occur are recorded, even if a future loss is a remote possibility. These losses must be calculated for the contractual term, reduced for expected prepayments but can't consider extensions or renewals unless the bank expects a troubled debt restructuring (TDR). These changes mean that loss reserves will be larger than the old calculation would have dictated in almost every circumstance. A former FASB chair estimated that loss allowances could be as much as 50% larger for the biggest banks. Could CECL cause banks to shorten credit terms?
PCBB's Risk Consulting Division head Doug Hensley added color to the regulatory discussion by outlining economic conditions waiting in the wings that could easily further complicate the regulatory changes. The current economic expansion is getting long in the tooth by many measures, and an environment of rising interest rates combined with a slowing economy could put significant stress on bank balance sheets.
Ryan Jenkins offered terrific insight into the generational changes going on in the US and how banks can work to prepare. It's been projected that banking is the industry with the most to lose as Millenials take over as the dominant demographic. It's projected that Millenials will make up 75% of the workforce in just ten years, so they will indeed dominate. Millenials are often the agents of change, therefore their habits and preferences are likely to continue to migrate. It's been quipped that "writing a check is like chiseling your payment in stone". Why do we still call them checking accounts? We are living in a streaming economy characterized by constant input from social media delivered by technology. Change will be swift and continual. Ryan also expects that it won't be too long before we change the familiar posture of head bent over a smartphone, as wearable technology becomes more usable and user friendly. We look forward to more attentive pedestrians and drivers!
This wraps up our real-time coverage of the EMC, although we will recount some other stories over the coming issues of the BID. Conference attendees will be heading home today and we thank everyone who came. For those that couldn't come this year, these outlines offer a small taste of what went on. We hope you will join us next year.
Subscribe to the BID Daily Newsletter to have it delivered by email daily.

Treasury yields made a 5bp climb as investors made room for new supply.

Yields are currently up 1bp ahead of the FOMC rate announcement.

The FDIC indicates the average community bank is $342mm in size, has 6 offices and operates in 1 state and 1 large metropolitan area.

Gallup reports the average American says they retired at age 62 vs. 59 back in 2010.

A check on inflationary pressures by the Billion Prices Project (scours the internet and looks at online prices) finds inflation has turned sharply upward recently.

Sweden's central bank has cut its benchmark rate to minus 0.25% and is buying back $3.5B in bonds as it seeks to boost inflation and stimulate the economy.

Bank of America Merrill Lynch's 2015 CFO Outlook survey of 600+ US corporate financial executives finds the following percentage of companies who buy from, sell to or operate in a foreign country (or plan to begin doing so this year): doing or planning to do business internationally (54%); currently buy from foreign markets (42%); currently sell to foreign markets (39%) and currently have operations in foreign markets (21%). Community bankers should really think about doing more with foreign exchange in order to support customer activities and expand profits.
Copyright 2018 PCBB. Information contained herein is based on sources we believe to be reliable, but its accuracy is not guaranteed. Customers should rely on their own outside counsel or accounting firm to address specific circumstances. This document cannot be reproduced or redistributed outside of your institution without the written consent of PCBB.