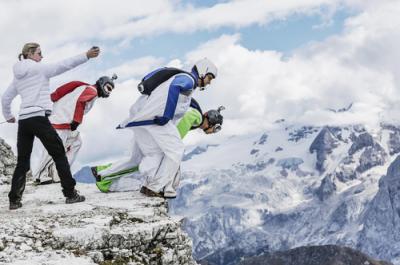 Soaring Ahead Of The Competition

Each year, daredevil athletes from around the world compete to be crowned "The world's fastest flying human being." The activity, known as BASE jumping, has its origins in Norway, where an international competition has taken place every year since 2008. Athletes, dressed in specially made wingsuits, stand on the edge of a mountain cliff and jump, racing to the finish line with gravity as their only guide. In order to win, competitors in this spectator-friendly sport quite literally fly by the seat of their pants. While the right training and gear might lessen the risk for humans wearing wingsuits, it is certainly dangerous for banks to wing it when it comes to staying ahead of the competition.
We've written extensively about how tactics such as eliminating fees or paying higher rates on deposits and charging less for loans can get a bank into trouble. Big banks can always operate cheaper, so you're effectively hitting your head against a wall by trying to compete on price alone.
On the other hand, you can gain a competitive edge by keeping more careful tabs of your customers' banking preferences and anticipating their potential needs. Not surprisingly, many banks aren't taking full advantage of this opportunity. Many are actually losing business to competitors and what's worse - they might not even know it.
Consider a recent survey by Bain & Co. of 83,000 customers in 22 countries. It found a healthy portion of customers are slinking away undetected. More than 33% of respondents said they bought a banking product from their primary bank's competitors during the past year. These customers aren't closing their primary accounts; they are merely giving additional business to another bank.
Letting these customers slip away without a fight is akin to leaving your front door wide open for intruders. We recommend you close and lock the door to avoid losing relationships.
Keeping business from defecting to competitors requires ramped up cross-selling efforts. For obvious reasons, the best time to cross-sell is when you are onboarding a customer. That said, building a proactive, targeted and consistent cross-selling strategy with existing customers is important too. Make every effort to touch current customers, especially high value customers on a regular basis.
In 2013 Gallup did a poll to uncover the various sources of bank sales. While 59% of sales came from customers already planning to open an account or buy a new service, 33% came from those who were considering opening an account but needed additional prompting and 8% came from those who weren't considering opening an account but did so with some prompting.
Now, don the hat of a bank that is intent on generating new business. Based on the Gallup poll results, you've got a good opportunity to win more business simply by letting customers know what additional products and services they might need and are available to them. To do this right, you obviously have to have a good handle on current product ownership, but even more so, you need to understand customers' behaviors and attitudes to provide insight on how to make unique and relevant offers in a timely way.
We know the competition for customers can be fierce, but there's no need to jump off a cliff to prove your worth. Being a winner starts by showing customers you are paying attention and ends with giving them the products and services they need. Doing so consistently is tough, but it also keeps customers from flying away from your base.
Subscribe to the BID Daily Newsletter to have it delivered by email daily.

Sentiment that a rate hike will not happen in the near term helped fuel trade activity and sent Treasury yields down 5bps.

Yields are down 1bp ahead of existing home sales.

Atlanta Fed President Lockhart said regulators should increase their monitoring of shadow banks, as it is growing quickly, is already in the trillions and could pose a risk to the economy. Money market funds, hedge funds and others are all part of the so called shadow banking system.

Mandiant reports hackers these days will be inside a network an average of 205 days before they are discovered and 69% of those compromised are notified of the issue by an external 3rd party.

The Bank for International Settlements (BIS) has released a report that finds bond market liquidity is so fragmented now that the actions of a few fund managers can lead to big swings. A change in regulations and the disappearance of many larger broker dealers during the credit crisis has sharply reduced liquidity.

JPMorgan indicates a continued rapid decline in the unemployment rate is necessary for the Fed to raise rates at the June meeting.

Chicago Fed President Evans has released a paper that indicates the Fed should defer rate increases for a little while longer to give the economy more room to lift off.

Money manager PIMCO has reduced its expectation for US economic growth to a range of 2.5% to 3.0% this year. PIMCO cited the negative impact on exports of a strong dollar and lower oil prices.
Copyright 2018 PCBB. Information contained herein is based on sources we believe to be reliable, but its accuracy is not guaranteed. Customers should rely on their own outside counsel or accounting firm to address specific circumstances. This document cannot be reproduced or redistributed outside of your institution without the written consent of PCBB.