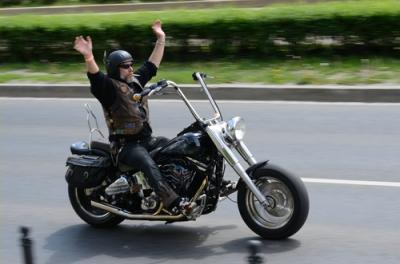 The history of motorcycle gangs in the US began in the 1940s and 50s. There were originally 5 major gangs of which the Hell's Angels and the Bandidos were the most famous. These gangs originated after WWII when some returning servicemen found their lives at home boring in comparison with their time in the war. Drag races on city streets, violence, disorder and even riots led to a general assessment that motorcycle gangs were a criminal scourge in America.
While not as wild as the motorcycle nomads of that period, the credit crisis often cast the image of bankers as evil-doers as well. The news was so often filled with negative stories about banks that we thought we would highlight some of the good things banks are doing. Consider how many bankers you know that actively promote financial literacy within their communities, as one example. Numerous studies have shown that the majority of people are virtually clueless when it comes to matters of personal finance and savings and bankers are helping to change this.
A number of community banks we know have taken steps to create programs that promote financial literacy. In recognition of this, some state banking associations have chosen to honor outstanding community banks for their work. The MD Bankers Association offers recognition awards for banks' efforts to promote financial literacy in three categories--pre-school through 8th grade, high school and college students and age 25 and older (the association has been doing so since 2004).
For banks that have well-implemented financial literacy programs, statewide recognition is an opportunity to garner good publicity for the positive work done in the community. But even if you don't currently offer a financial literacy program of your own, there may be opportunities to collaborate with local chambers of commerce and schools to develop new one. There are also opportunities to piggyback off existing initiatives, such as the ABA's annual Teach Children to Save Day in April. Since the National Program started in 1997, more than 210K bankers have taught savings skills to around 7.2mm students.
A number of state banking associations have also designed their own financial literacy programs that local banks can promote through their branch networks and with targeted marketing. One such example is the 2015 IA Money Smart Kid Essay Contest. Students in grades 7-11 may enter the contest and the winner receives a $1K college savings account. Banks can also get involved as sponsors in other educational campaigns such as the annual Save Your Tax Refund sweepstakes, a program designed to encourage consumers to save at tax time. There are also opportunities for banks to do proactive educational campaigns around America Saves Week, which takes place toward the tail end of Feb.
By kicking your financial literacy efforts up a notch, you can enjoy a more educated customer base as well as helping the community as a whole. While a financial literacy program probably won't garner as much attention as a motorcycle parade, it will draw attention to your bank's positive role in the community.
As for motorcycle gangs that proliferated during the post war period, there was always a sense of romanticism that went with the bad boy image. Movies like "The Wild One," starring Marlon Brando from 1953, exemplified that image. This romanticism set the foundation for the modern motorcycle gang, those groups of wealthy, well-dressed riders who parade around raising money for Wounded Warriors Project or Toys for Tots. It is a case of reversal of image and purpose over a relatively short period of time, and with solid efforts, bankers can and are doing the same.
Subscribe to the BID Daily Newsletter to have it delivered by email daily.

Treasury yields plummeted 8bps as the Fed said that inflation needed to improve and that the international economy is a factor in the rate hike decision process.

Yields are up 3bps ahead of jobless claims and home sales announcements.

We incorrectly reported that Independent Bank ($2.2B, MI) planned to consolidate about 19% of its branches (14 of 74), as it adjusted to declining branch volumes and increased mobile and other electronic channel usage. The actual percentage of branches should only be about 8.6% (or 6 out of 70 branches).

AnchorBank, fsb ($2.1B, WI) will sell 1 branch to Royal Bank ($325mm, WI) for an undisclosed sum and with undisclosed deposits.

Bank of Lancaster ($346mm, VA) will consolidate 3 of its branches into 2 and close 1 branch.

Bank of America, who has been closing branches aggressively nationwide, now said it plans to open some branches in CO and MN over the next 2Ys.

Payments Source reports 67% of all US contactless payment volume now goes through Apple Pay. Apple reports 750 banks and credit unions are now on board.

Whitney Bank ($19.9B, MS) is reporting an ATM fraud scheme where criminals attached a plastic mold and metal plate to ATM card receptors in an effort to capture card and pin numbers. The banks said that as a precaution it would be reissuing 7,100 debit cards.

Goldman Sachs project oil prices could decline to $30 over the longer term, as downward pressures persist.
Copyright 2018 PCBB. Information contained herein is based on sources we believe to be reliable, but its accuracy is not guaranteed. Customers should rely on their own outside counsel or accounting firm to address specific circumstances. This document cannot be reproduced or redistributed outside of your institution without the written consent of PCBB.