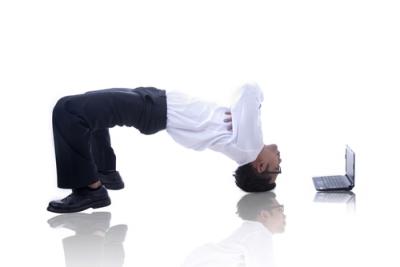 When media personality Adam Carolla needed funding for a 2007 film project called "The Hammer" he basically released the film using his own money. For his next film project, "Road Hard", he bypassed the studios and went directly to a crowdfunding website. Given his brand name and comedy cachet, Carolla raised the $1mm he needed within 30 days, grabbing cash from over 10,000 perfect strangers.
Now, just like Carolla, community banks are taking a look at crowdfunding. In a word, bankers want "in" but they are not sure how to proceed. At first blush, crowdfunding would seem to be at cross-purposes with community banks. Community banks have a blueprint for commercial lending that has worked well for the industry over the decades. Banks are now making the calculation that ignoring crowdfunding is counterproductive and that there is money to be made by climbing aboard the bandwagon. It is a different wagon though and it is full of non-banking lenders.
It's all about fees," says Jim Marous, publisher of Retail Banking Strategies, an industry blog on The Financial Brand. "With crowdfunding, there are fees involved, and as always, smaller banks are looking for new ways to generate fee income. In that regard, crowdfunding is a good fit for community banks."
Crowdfunding grew to a $6.4B market across the globe in 2013, with the US comprising about 50% of the market, according to the International Organization of Securities Commissions (IOSCO). By and large, crowdfunding is defined as the lending of money, usually in small amounts, that come from a network of individuals or groups (usually via web-based platforms). Crowdfunding lenders have habitually come from outside the banking sector and the first area of focus has been to refinance the credit card space.
These days, banks are looking to battle existing crowdfunding companies that have elbowed their way onto the banking industry's turf. Prosper and Lending Club are big players and they are muscling into the community bank space of small business lending.
Crowdfunding firms say banks should not see them as competition and are better off working with them. These alternative lenders can provide funding options for bank customers they argue that the bank really doesn't want to lend to. The bank then keeps the deposit relationship, while spinning off the lending portion to an online provider.
Early last year, the Fed looked at P2P lending activities. It found that while P2P loans are generally personal loans, small business owners often intermingle their personal and business finances. It concluded that as small business owners increasingly turn to this alternative source of money to fund their businesses, regulators will need to keep a close eye on both levels and terms of lending. In particular, given the relatively higher rate paid on such loans, they even indicated it may be in the best interest of the business owner to pursue more formal options as well.
Things are still nascent stage for peer to peer lending, but expect business lending online to continue to ramp up this year. Businesses are expanding, the economy is stronger and some will try this out for ease or simplicity to see how things go. For community banks, crowdfunding could be a real game-changer. The competition for these loans is already there, so it's up to banks to figure out the best way to address the challenge and maybe whether to consider adding a new line of business.
Subscribe to the BID Daily Newsletter to have it delivered by email daily.

With jobless claims coming in line with market expectations, Treasury yields saw a modest 1bp lift by the close.

Yields are down 4bps this morning in reaction to the ECB's larger-than-expected debt purchase program.

The ECB announced it will buy $1.3T in government bonds ($60B Euros per month through Q3 2016) as it decides to take aggressive action to revive economic growth in the region.

President Obama's plan to charge a 7bp tax on the liabilities of banks and other financial services companies in an effort to raise $110B is projected to negatively impact lending activity if enacted.

The Wall Street Journal points out bank investors have become more worried about the potential negative impact from low oil prices on regional banks due to their exposure to the sector. Among selected banks the following are exposures as a percent of loan portfolio to energy and energy-related firms: Citigroup (11%), Comercia (7%); Bank of America (6%), Regions (4%) and Fifth Third (2%).

American Express said it will eliminate 4,000 jobs this year (6% of workforce) as it seeks to meet revenue targets.

The ABA Economic Advisory Committee of bank economists projects 2015 GDP of 2.9% and rate hikes starting in Q3 (but taking a gentle path).

JPMorgan projects the Fed remains on track to raise interest rates later this year despite lower long-term yields and global market volatility. For the Fed it would appear, strong and accelerating US growth remains the primary catalyst for higher rates.

Cisco's Annual Security Report for this year highlights the following: through the first 11 months of 2014, spam volume increased 250% YOY; hackers have increased their use of malicious advertising; hackers have shifted from attacking corporations to attacking users of computers, tablets or smartphones as an easier entry point; and sending fake requests to users for a password reset is a common tactic.
Copyright 2018 PCBB. Information contained herein is based on sources we believe to be reliable, but its accuracy is not guaranteed. Customers should rely on their own outside counsel or accounting firm to address specific circumstances. This document cannot be reproduced or redistributed outside of your institution without the written consent of PCBB.