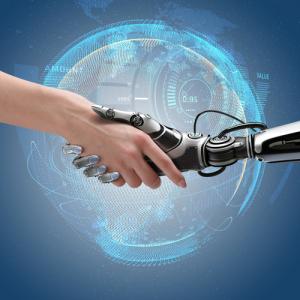 The Bots Are Watching!

There is an online retailer called the Robotshop which offers robots of almost every variety for sale. Product categories include domestic, professional, toys, kits and even parts for building your own custom robot. We think Rosie the Robot of the Jetsons is the epitome of domestic robots, and while no current models that we know of are that comprehensive, there are task-specific ones to help out in the home. The Roomba is an automatic vacuum cleaner which also stars in numerous pet videos; there is also a self-flushing self-washing cat box-bot and a voice activated R2-D2 seems like a great choice for any robotic household.
While we are often amazed with what robots can do, we were surprised to find out that robots are also responsible for watching a large percentage of online advertising videos and as well as for a big percentage of the ad clicks on internet display ads. We have gathered from a lifetime of watching cartoons that robot personalities can be peculiar, but the idea that sophisticated bots spend their days looking at internet ads is a new twist.
Unfortunately for us all, these types of robots are actually malware installed on innocent people's computers. The bot-fraudsters make it appear that the person is visiting numerous web advertising sites, resulting in inflated traffic numbers and therefore making things more expensive for advertisers. Big-name companies like Ford, Intel, Mastercard and Wendy's are among those that have been duped. While it may seem almost funny to consider that a large proportion of the advertising traffic is in the end bogus, it actually costs companies (and ultimately us) a lot of money. In fact, the Association of National Advertisers estimates that some $6.3B will be wasted in 2015 as a result of the inflated traffic created by bot fraudsters.
How does this all work? Bot fraudsters start by infecting unsuspecting computers with malware that contains sophisticated botnets that mimic the behavior of online consumers. They pause at ads, watch videos, switch websites and even put items in shopping carts. Web security investigator White Ops compiled a survey of 181 ad campaigns by 36 companies over the course of 60 days and the findings were pretty astonishing. Bots accounted for an average of 23% of video ad views and an average of 11% of display ad clicks.
Experts believe 33% of the world's computers are infected with some sort of malware and the use of these "consumer bots" explains at least in part the age-old question as to why someone would care about hacking into grandmother's computer. If her computer can be set up to generate a billion ad clicks, it becomes clear that ad fraud could be a major driver of home computer fraud. In addition to defrauding advertisers, grandmother's computer is also left more vulnerable to other malware.
What does this say about the amount of time and effort being invested in digital advertising if a substantial portion of the reported traffic is bot-generated? Is internet advertising anywhere near as effective as companies think? Internet advertising is certainly not going away and it is far less expensive than print advertising, but noting the potential for fraud-bots to manipulate the results, healthy skepticism is probably appropriate.
The use of robots for purposes both good and nefarious is likely only to increase. Amazon is experimenting with delivery drones and the scammers will certainly continue to use robots as a tool to irritate victims and enrich developers. In the meantime, we are working to train our robot dog to bring our slippers.
Subscribe to the BID Daily Newsletter to have it delivered by email daily.

Yields are down 1bp ahead of the unemployment rate release.

Community bankers nationwide cheered President Obama's nomination of Allan Landon for a position on the FOMC. Landon currently is a partner at a private investment fund that invests in community banks and previously was CEO of Bank of Hawaii ($14.5B, HI), CFO at First American Bank (TN, acquired by AmSouth in 2000) and at Ernst & Young. His community banking experience could be helpful.

A Fed Chicago survey of experts from industries including banking, manufacturing, auto, academia, service and consulting finds a consensus outlook for GDP this year of 2.7% and an unemployment rate of 5.6% by year-end. The FOMC meanwhile projects a central tendency projection for GDP in 2015 high of 3.0% and a low of 2.6% and an unemployment band range of 5.2% to 5.3% by year-end.

In an effort to catch Google Chrome in the browser space, Microsoft said it will launch a new browser in 2015 code named "Spartan" to add security features and capability. Web traffic tool Statcounter finds Chrome has 35% of the US market, Explorer is at 31% and Apple Safari is about 17% and Firefox is at 14%.

Analysis by Moody's from Nov 2014 finds the following categories of loans in order have the highest levels of credit risk (rated loss, doubtful, substandard, OLEM or watch): construction (about 23%), agriculture (15%), management (14%) and admin support (12%).

The OCC is warning banks not to boost loan growth if the primary way to do so is to weaken underwriting standards or pricing. The regulator is also monitoring banks that lower credit standards without a corresponding increase in ALLL.

The OCC indicates it sees some banks lowering overhead expenses by reducing control functions, exiting less profitable businesses, closing offices, and outsourcing critical control functions to third parties, without appropriate levels of due diligence. Be careful here and thoroughly document what you are doing if this applies to you to avoid issues at your next exam.
Copyright 2018 PCBB. Information contained herein is based on sources we believe to be reliable, but its accuracy is not guaranteed. Customers should rely on their own outside counsel or accounting firm to address specific circumstances. This document cannot be reproduced or redistributed outside of your institution without the written consent of PCBB.