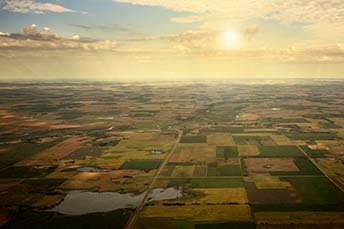 by Steve Brown
branches
bank mergers
Summary: Mergers and branch consolidation have accelerated in recent years, leaving an increasing number of rural communities without access to bank branches. Could CFI’s turn these banking deserts into banking opportunities?
Share this Article:
The town of Moorhead, Mississippi is thought to be where the Blues was born. Indeed, there’s even an historical marker in town, “Where the Southern Cross the Dog," with the inscription: “W. C. Handy, ‘The Father of the Blues,’ Handy wrote that he first heard the line "Goin' where the Southern cross the Dog.” Moorhead became a hub not only of rail transportation, but of blues activity in local juke joints.”However, a few years ago, the small town found itself singing the banking blues. Regions Bank, which had operated the only branch in town, pulled out, threatening to make Moorhead another in the growing list of rural banking deserts.  "That was actually the only bank in our community and the next-closest bank was probably 8, 9 miles to Indianola," said the town’s mayor George Holland. "I was thinking, 'What are we going to do?'"Fortunately for Moorhead, Regions Bank donated its building to Hope Credit Union and helped with the transition, enabling Moorhead to avoid becoming another unbanked rural town. But many others haven’t been as fortunate.The problem. Mergers and bank branch consolidation have accelerated in recent years, leaving an increasing number of rural communities without access to bank branches – and the rise of “banking deserts” that have no branches within a 10-mile radius.That’s a problem. As rural residents tend to rely more on branches, than those in urban areas, due to insufficient bandwidth to support digital banking. In 2019, nine of 10 rural residents visited a bank branch, and 25% visited more than 10 times a year – rates far higher than urban residents, according to the FDIC. Rural households also are far more likely to see a bank teller on their visits – about a third of rural households used a bank teller, about twice the rate for urban households.However, those living in rural areas are more likely to live in banking deserts, without access to a nearby branch, so they face long drives, the CFPB found. The problem is getting worse. In 2014, there were 1,132 banking deserts (65% of which were in rural areas), plus, an additional 1,055 potential banking deserts (81% identified to be in rural areas). The number of banking deserts has likely climbed as banking consolidation has a direct impact on rural banking deserts.How CFIs are impacted. The CFPB says it is looking into the problem and what the government can do to help alleviate it. The obvious solution is more branches in rural areas. But making that happen can be difficult. CFIs traditionally have been the primary providers of banking to rural communities. Back in 2012, there were 600 counties – about a fifth of all counties in the country – whose only institution was a CFI. However, CFIs often pull out because branches in isolated small towns are unprofitable.The CFPB notes that the Community Reinvestment Act tries to get CFIs to provide services to underrepresented communities. The report notes that under the CRA, larger banks with their vast resources might be encouraged to do more in rural communities. But CFIs have always been the banking lifeblood of small rural communities, and any solution will probably have to rely on these institutionsWhat you can do about it
With the right combination of federal and local support, rural communities could become zones of opportunities for CFIs. And more towns like Moorhead could finally stop singing the banking blues.
Subscribe to the BID Daily Newsletter to have it delivered by email daily.