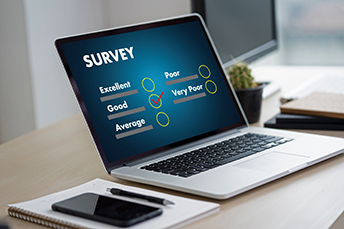 by Steve Brown Topics: performance, cyber risk, funding
Summary: The 2019 CSBS community banking survey has some valuable insights. We provide them to you today.

It is said that internal surveys typically get about a 35% response rate vs. about 10% or so for external surveys. Experts say surveys should take <5 minutes to complete.
Speaking of surveys, we note that funding and cybersecurity are leading concerns for community banks, according to the 2019 annual community bank survey by the Conference of State Bank Supervisors (CSBS).
This represents a notable shift from previous years where regulatory compliance costs were top of mind. Here are some highlights from the survey:
This year, about 35% of banks said the cost of funding was the factor expected to affect future profitability most. It was higher than loan demand (32%), operating costs (13%), loan rates (11%) and regulatory costs (4%).
This remains important given its key as a valuation driver for banks, even as rates seem to be coming down (or holding flat at least), given how fast loans/assets are prepaying.
Indeed, almost one-third of bankers ranked either core deposit growth (23%) or the cost of funds (8%) as their biggest challenge. Other highly ranked challenges included regulation (16%), competition (15%), loan demand (12%) and keeping or attracting qualified employees (10%).
To be sure, there's hefty competition among banks for core deposits. Nearly 92% of respondents cited competition as important or very important factor in their capability to attract and retain core deposits. For transition deposits, location also continues to be a primary factor in competition.
When it comes to retaining core deposits, community banks cited several challenges, including a generational shift in customers' attitudes and practices about savings. What's more, 18% of bankers ranked depopulation as an important impediment and 12% noted it was very important.
On the cybersecurity front, 71% of bankers described this type of threat as a very important risk. Note that this is a level significantly higher than the second-ranked factor of credit at 45%. Interestingly, some banks said they would like to see tougher legislation on data breaches and cybercrimes. Many also thought potentially even a national standard for data protection and security breaches across major industries would be good.
Efforts to boost customer knowledge, heightened cybersecurity training, information sharing and bank examinations by trained cyber-specialists were among other ideas cited for bolstering cybersecurity.
It's also worth noting that while compliance costs weren't considered by banks to be as pressing a concern in this year's survey as last year's, inferred compliance costs for community banking rose 4% to $4.9B in 2018. About 40% of bankers said they believed costs would continue to go up, while 5% predicted costs would drop.
We know it is tough out there. But, we are here to support you. Let us know how we can help with our solutions.
Subscribe to the BID Daily Newsletter to have it delivered by email daily.

Three Ways To Engage Minority-Owned Businesses
There are opportunities to reach out to diverse communities and cultivate new customer relationships. We give you three ways to do it.

The Financial Stability Oversight Council (FSOC) voted to issue final guidance regarding nonbank financial companies it will label as systemically important financial institutions (SIFI). It will require primary regulators of such institutions to monitor systemic risk and if deemed by FSOC to be risky, then the primary regulator will step in and move to de-risk it. If the regulator cannot do so or the activity is labeled as too risky by FSOC, then it would move to designate the company as SIFI and provide a road map for the entity to make changes to get the designation dropped.

The Fed and FDIC have flagged shortcomings in the living wills of 6 of the largest US banks related to their ability to reliably produce data needed to execute an orderly wind down. The banks will be required to fix this, but it shows even the largest banks with all of their advanced technology still have difficulties with data.