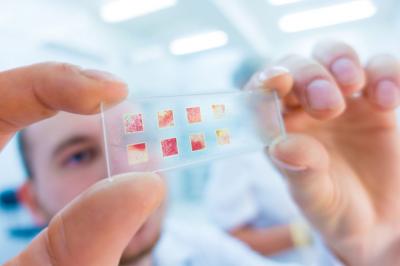 Small Things Can Have A Big Payoff

Really small things can sometimes really help humans. Look no further than a discovery made by the University of Southampton. There, researchers found nanostructured glass can be used to record and retrieve data. These small glass disks about the size of a quarter can hold 360 terabytes of data. Also, this storage device can handle heat up to 1,000?C without an issue. Basically, the research indicates companies should be able to store and save their data at room temperature for about 13.8B years. That is a really long time obviously, so this finding provides a greater possibility in solving the age-old issue of keeping data usable long into the future.
In banking, it seems data is flying around all the time, so bankers have to be nimble to manage it all. On this front, consider that with interest rates moving higher and the Fed set to raise them again this year, bank deposit costs will likely rise too. As bankers crunch that analysis, many experts also think higher short-term interest rates will mean higher margins. That means many community banks could benefit by lagging these interest rate increases on the deposit side. Getting a bit more technical, this is all about understanding your deposit beta.
Banks of different sizes and markets assume a variety of deposit betas: how much of a change in market rates they will pass on to customers. That deposit beta, which can change as interest rates shift, determines whether and how much a bank gains from short-term rate increases.
Research finds large banks expect 2017 deposit betas right around 50%, while large regional banks expect betas from 20% to 60%. Meanwhile, community banks expect significant variation with betas from 60% to 100%, depending on the market and account type of course.
Investment bank KBW forecasts an average beta on interest-bearing deposits of 17% for universal banks, 43% for regional banks, and 35% for small- and mid-cap banks from the third quarter of 2016 through the fourth quarter of 2018. Comparatively, the industry had deposit betas of 41% and 62% in 2005 and 2006, respectively. That was when the Fed last raised short-term rates in a series of moves.
KBW analysts expect that deposit bases will behave differently in different markets, with costs rising faster in areas such as DC and NY, where many banks carry high loan-to-deposit ratios. Some large DC-area commercial customers have demanded a better return on deposits, and that could push market rates higher. In NY, by contrast, some banks are comfortable taking loan-to-deposit ratios up to 120% and don't think deposit rates will rise much before the Fed raises rates several more times. Still other banks, particularly those in rural areas or with low loan-to-deposit ratios and low-cost core deposit rates, may even experience assets repricing faster than liabilities.
The same analysts say that as rates go higher, banks probably won't increase rates on just a few products. Instead, banks will likely change account tiers and offer higher rates for large deposit minimums, as well as market deposit specials and longer-dated CDs. Only after those changes, is it projected that banks will raise rates across the board.
It's smart to keep a close eye on the cost of funding, but a singular focus on the near-term or marginal cost of funds may not be helpful in this situation. Community banks will want to think about planning funding, working with a variety of constraints: core funding ratios, segment concentration limits, interest rate and basis risk, and regulatory requirements. Further, it would be prudent to evaluate your position relative to these factors over both 1Y and a longer 3Y to 5Y period. Be sure to consider potential macroeconomics, wholesale rates and competitive dynamics as part of this analysis.
This approach to planning helps you see the true effect of your enterprise funding decisions. It goes beyond just the cost of funds to look at how that funding will affect your bank's rate sensitivity. In so doing, even small actions can have a big impact on funding decisions over the next several years.
Subscribe to the BID Daily Newsletter to have it delivered by email daily.

Yields popped 2bp even with lower than expected wage growth as employment numbers came in strong.

Research by Cerulli Associates finds about 16% of financial advisors were women, while a Bureau of Labor Statistics analysis puts the number closer to 32%. No matter which one is right, banks should note that State Street research finds 55% of women between ages 25 and 34 say they prefer to work with a female advisor.

Research by Marsh & McLennan on cyber risks finds cybercrime at financial institutions has resulted in losses of an estimated $1B over the past 2Ys.

Research by NPD Group finds Americans ate 433mm fewer lunches out last year overall, resulting in the lowest level of lunch traffic at restaurants in 40Ys. The average price of a restaurant lunch has soared 19.5% since the recession, driven by rising labor costs that were not offset enough by lower food costs.

In this 2-part webinar series, PCBB's C&I experts will offer a deeper understanding of Shared National Credits (SNC). You'll also, learn how PCBB manages its own SNC and how your bank can benefit. Register today by visiting our website.
Copyright 2018 PCBB. Information contained herein is based on sources we believe to be reliable, but its accuracy is not guaranteed. Customers should rely on their own outside counsel or accounting firm to address specific circumstances. This document cannot be reproduced or redistributed outside of your institution without the written consent of PCBB.