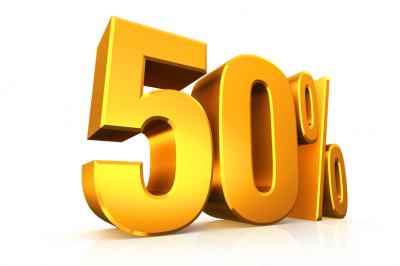 Half Way Through A Good Year

Various studies have found that long-term living under a flight path can do nasty things to one's health. For instance, researchers have noted higher blood pressure readings and heart valve impairments among people living near an airport. As a result, many community advocates are calling on the FAA to lower the noise threshold it currently accepts in those areas. At the same time, FAA officials are working with various communities around the country to change flight patterns in instances where the noise has become unbearable to residents.
We bring this up because we have also been hearing a lot of noise about what may be in store for small businesses the rest of this year. Many prognosticators are saying it's not going to be as promising a year for small business as one might hope. Consider Bank of America's Spring 2016 Small Business Owner Report, which noted that only 51% of respondents expect their revenue to grow over the next 12 months. This is a decrease of 12 percentage points since spring of last year. Meanwhile, 40% said they expect their revenue to remain flat over the same period vs. 31% who expressed that sentiment in the year-earlier survey.
The study also mirrors the findings of the most recent NFIB monthly survey of about 700 small business owners. It found "no real enthusiasm" for capital spending, boosting inventories, or expanding their enterprises.
Despite the noise from these surveys, there are several reasons why community banks should remain optimistic about the future of small business and continue to focus significant efforts on this market. For starters, small businesses are critical to the economy. According to Census data, 91% of US businesses have four employees or less. Meanwhile, SBA data shows that 54% of US sales occur at small businesses.
If that isn't enough, consider another reason to pursue small business opportunities. Many market watchers consider the atmosphere ripe for continued entrepreneurial growth, meaning ample prospects for banks to develop new customers and increase business with existing customers. Gas prices are climbing, but they're still at low levels so consumers have more money to spend and save. Meanwhile, the dollar remains strong and unemployment trends are mostly favorable, so those can help too. All these conditions suggest that sunny days are ahead for the entrepreneurial climate and small businesses.
Consider as well that we've reached a point in history where millions of baby boomers are close to donning the robes of retirement. Many of these small business owners will be passing on their companies to Millennials as the future of the small business market.
Community bankers are working hard here, as they know Millennials bank very differently than their older predecessors. Notably, 33% of Millennials say they won't need a bank in the future, according to The Millennial Disruption Index, a survey conducted by the Scratch unit of Viacom. As such, banks know they risk being disenfranchised in the future, so they are working and competing hard to keep these customers.
Since small businesses continue to need loans to operate, community banks have an added incentive to rev up their engines amid increasing competition.
While it's too soon to say with certainty whether 2016 will be a boon or a bust for small businesses collectively, community banks have ample reason to be optimistic. The best approach is to filter out the noise of the naysayers and focus your efforts on growing this important customer base.
Subscribe to the BID Daily Newsletter to have it delivered by email daily.

After shedding multiple business lines, GE Capital is no longer considered "systemically important" under US government regulations in the first ruling of its kind by FSOC.

Fed Governor Powell said that while "it is far too early to judge the effects" of the UK vote, that "global risks have now shifted ever further to the downside" and that "monetary policy will remain supportive of growth." Meanwhile, former Fed Chair Bernanke is on the tape saying the US economy "the economic recovery is unlikely to be derailed" as long as "conditions in financial markets don't get significantly worse." He reiterated the biggest risk he sees to financial stability is "the risk of further defections or breakdown in the European Union."
Copyright 2018 PCBB. Information contained herein is based on sources we believe to be reliable, but its accuracy is not guaranteed. Customers should rely on their own outside counsel or accounting firm to address specific circumstances. This document cannot be reproduced or redistributed outside of your institution without the written consent of PCBB.