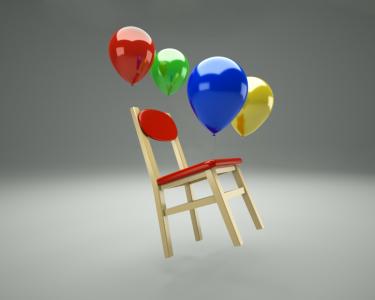 When Canadian Daniel Boria wanted to drum up publicity for his all natural cleaning solution company he decided traditional advertising methods just weren't good enough. Instead, Boria decided he was going to parachute with a sign bearing his company's name into the middle of the Calgary Stampede, an annual rodeo event that attracts more than 1mm people. After contacting multiple airplane and helicopter companies, Boria discovered that the rodeo was located within a no-fly zone. Still determined to carry out his plan, he instead attached 110 helium filled balloons to a plastic lawn chair and took to the sky equipped only with a parachute and an oxygen tank. But when intense winds blew him off course he ultimately had to parachute. Luckily, he landed in an open area, but unluckily, he was greeted by police who arrested him and charged him with mischief causing danger to life.
While Boria was able to put his publicity stunt into motion before the law ultimately caught up with him, community banks are discovering that they need to be prepared to address regulators' fears about potential risks from the very beginning when considering a merger or acquisition.
Though many of the Dodd-Frank regulations were meant for the biggest banks, as we all know some things can roll downhill. The wacky thing is that it seems regulatory reviews of M&A deals more expected for the largest banks have rolled into even the smallest of deals. As a result, regulatory consideration of the potential risk has slowed M&A activity among community banks, with several deals grinding to a complete halt.
Dodd-Frank is the gift that keeps on giving for community banks, as it has added yet another metric that regulators must consider--the possibility that an M&A deal could create systemic risk to the US banking system. So, these elements must be considered before any such deals can be given the go ahead. Among the specific issues regulators must consider is the size of the resulting bank post merger, the extent to which the new institution would add to the complexity of the financial system, the bank's CRA ratings and financial stability as a combined entity. As a result, regulators require all M&A deal applicants, regardless of size, to address the issue of systemic risk. M&A applicants must lay out why they believe their proposed deal would not result in a concentration of resources within a specific segment of the market or have a negative effect on competition.
Though this added burden of proof could mean delays for M&A deals, the Fed's recent approval of BB&T's acquisition of The Bank of Kentucky (roughly $1.9B in total assets), showed that regulators mostly view deals involving the acquisition of an institution under $2B to be outside the window of systemic risk. According to the Fed's order regarding this deal, acquisitions in this size range generally "will not pose significant risks to the financial stability of the United States absent evidence that the transaction would result in a significant increase in interconnectedness, complexity, cross-border activities, or other risk factors."
While this green light is a positive sign for smaller deals, the Fed is only one of many layers. Other regulators also weigh in on deals, so multiple stamps of approval are needed to get deals done across a myriad of rules and regulations.
We would recommend that community banks get a lawn chair and a bunch of helium balloons when doing complex M&A deals so you can float on by these issues. That said, remember that what goes up must come down, so be sure to pack a parachute.
Subscribe to the BID Daily Newsletter to have it delivered by email daily.

Gains in the equity and commodity markets drove the sell-off in Treasuries pushing yields up 4bps. Investors look to upcoming scheduled Fed speeches for further direction.

Research by PwC finds the old metric of a 15% ROE has declined to around 8% today after adjusting for the impact of regulation and industry reform. PwC also projects the negative impact of Dodd Frank will reduce industry profits by as much as 12% over the next 5Ys.

Community bank readers will be interested to know that Starbucks now reports 21% of its US sales in company owned stores occur through its mobile app.

TD Bank research finds 85% of consumers in Boston say they are extremely or very satisfied with their primary checking account. Overall, 6% said they had changed their account in the past 2Ys.

A University of Phoenix survey on this subject finds: 74% of US adults changed online behavior due to the threat of cybercrime; 68% put some or a lot of trust in the financial sector vs. 50% for the retail industry and 41% for government; 46% will no longer conduct transactions on a shared computer; 44% have experienced a personal security breach; 42% believe we are less secure than we were 5Ys ago; 35% change passwords more often; 35% do not give out personal information online; and 35% do not use public Wi-Fi.

S&P is warning it might downgrade the credit ratings of some of the largest banks, following Friday's announcement by the Fed around total loss absorbing capacity (TLAC). S&P said the new rules lower "the probability that the U.S. government would provide extraordinary support to these institutions to enable them to remain viable" during stressful situations.
Copyright 2018 PCBB. Information contained herein is based on sources we believe to be reliable, but its accuracy is not guaranteed. Customers should rely on their own outside counsel or accounting firm to address specific circumstances. This document cannot be reproduced or redistributed outside of your institution without the written consent of PCBB.