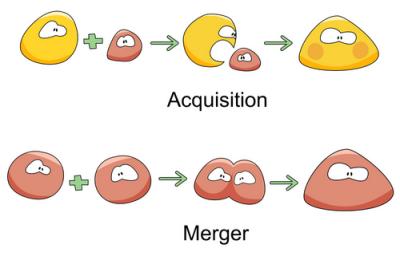 There was an interesting report recently on marriages and divorce by the National Bureau of Economic Research. It found marriage rates are at their lowest level in the past century and also that divorce is less likely than it has been in more than 30Ys. There are many factors in the decline in marriage, but given the rapidly dropping divorce statistic, perhaps one could deduce that people are marrying more compatible partners.
The same may be true in banking, as it seems like there have been more mergers and acquisitions among banks lately. Given the increase, we wonder if later on the divorce rate will also rise among banks. For now though, it seems regulatory rules are driving mergers both large and small so we are monitoring it.
Consider that United Community Banks of GA and Palmetto Bancshares of SC announced a merger recently that will give the combined banking entity $8.9B in assets with 129 bank branches in four states. The deal is short of $10B in combined asset regulatory trigger, and this is probably not an accident.
Regulatory pressure abounds, which one reason new rules to help community banks are trickling out of DC. Raising the asset-size threshold for community bank holding companies to $1B from $500mm is one. This higher threshold is expected to cover 89% of all US bank holding companies and it should have a big impact on capital raising activities at community banks.
For its part, the Federal Reserve Bank of Cleveland calls the 2015 M&A picture "a trend that's reflected in changing bank signage across the country." The aggressiveness displayed by small- and mid-size banks to find new partners is in part linked to the Fed's move on the asset-size threshold front. The change enables smaller financial institutions to take on debt to complete mergers and acquisitions and this changes the landscape.
According to the Fed, the statute does so by allowing smaller banks to exceed debt limits to finance mergers and acquisitions. To qualify for the exemption from capital rules, holding companies also must demonstrate they are not engaged in off-balance-sheet activities, activities outside of traditional banking, or other complex financial activities.
In the past, community banks often found it hard to obtain the financing needed to complete M&A deals. Community banks had long lobbied for the easing of debt capital rules for mergers and acquisitions and finally got their wish.
The Fed is still expected to keep a close eye on the increase in the asset-size threshold to be certain that institutions understand the risks associated with their larger size. Federal regulators are also expected to monitor the change in reporting requirements which were also eased as part of the new rules.
As for lower marriage rates among Americans from our introduction, some believe a key factor could be young people waiting longer to get married. This would also contribute to the lower divorce rate, in that people are a bit more mature before they marry and make better decisions.
As for banks taking a look at the possibilities in the M&A world, our parting advice is to be certain that any prospective partner is indeed compatible and to make your decisions based on careful assessment and knowledge regarding who to date and possibly eventually marry.
Subscribe to the BID Daily Newsletter to have it delivered by email daily.

Treasury yields made an 8bp climb by the close of the day amidst a global fixed income selloff.

Yields are currently up 4bps as investors gear up for the 3Y auction.

1) A private equity consortium backed by TPG, PAG Asia and Ontario Teachers' Pension Plan will acquire commercial real estate broker Cushman & Wakefield for about $2B and rebrand under the Cushman & Wakefield name. The new company will have revenues of $5.5B, 43,000 employees and manage more than 4B square feet globally.

First Data Corp. announced a strategic expense management initiative, as it seeks to optimize its expense base by $200mm by mid-2016.

Bloomberg reports Fed Chair Yellen warned investors in a recent speech that long term interest rates are at very low levels and that once the Fed begins to raise Fed funds, longer term rates "can move very rapidly" and investors could see "a sharp jump in long-term rates." Bankers should be prepared, as more and more have extended maturities on both investment and loan portfolios, so such a move could negatively impact capital and performance.

Wells Fargo said the total amount of energy loans that are now on nonaccrual jumped 26% in Q1 vs. the end of 2014, due to lower prices in the sector. Wells' energy book is about 2% of total loans.

The latest Wells Fargo/Gallup Small Business survey finds small business owner optimism has declined about 10% since Jan (from 71 to 64 in Apr), marking the first large decrease since Nov 2012. A challenging economic environment and lower revenues were key contributors.

A Bank Director survey of executives & directors that asked what respondents considered the top reasons they might make an acquisition found these among the highest: increase earnings per share (51%); supplement or replace organic growth (48%); expand geographically (42%); increase market share in existing market (40%) and rationalize operating and/or regulatory costs over a wider base (40%).

By generation, the 2015 workplace is about 39% millennials, 18% Gen X, 30% boomers and 13% others. In the next 10Ys experts project that will shift to 75% millennials and 25% for all other generations.
Copyright 2018 PCBB. Information contained herein is based on sources we believe to be reliable, but its accuracy is not guaranteed. Customers should rely on their own outside counsel or accounting firm to address specific circumstances. This document cannot be reproduced or redistributed outside of your institution without the written consent of PCBB.