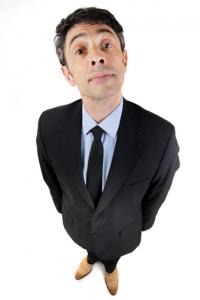 Mansplaining is a term that can be defined as "giving condescending, inaccurate explanations based on incomplete or incorrect information, but delivered with rock solid confidence and certainty". Calling it mansplaining is of course completely sexist, as women can do this equally as well as men. We all have people we avoid in the office or at parties because of their tendency to mansplain things. The good news is that there is a pretty simple cure for this malady of spreading blustering misinformation - education - that is, training in sensitivity.
Sensitivity testing in banks shows which areas are most susceptible to certain economic factors and which areas therefore are likely to affect to the normal operation of the bank the most if those economic events were to occur. There is a lot of focus on the assumptions that go into risk assessment models whose results drive strategic planning in banks. Sensitivity testing applies a number of different assumptions to standard models with the idea of highlighting where a bank might have unknown weaknesses or sensitivities as well as showing where the bank is less sensitive. The problem can be that a sensitivity test can also highlight sensitivities which matter less in the longer run safety and soundness of the bank, but which would nonetheless bring attention to insignificant matters.
Regulators are focusing of late on model assumptions, as the validity of the results from any model is absolutely dependent upon the quality of the inputs. A key item brought up in both the OCC's Fall 2014 Semiannual Risk Perspective document and at an Ask the Fed session was the importance of modeling assumptions, and that unrealistic or incorrect assumptions may lead to faulty results. If results are relied upon by bank management, they can lead to an underestimation of risk and problems down the road. Both the OCC and Fed stressed the importance of sensitivity testing overall, but both also especially focused on the deposit area.
The FDIC even jumped into the mix by adding that it expects its examiners to review key assumptions. Regulators say they frequently find weaknesses at banks including using peer averages without taking into consideration bank-specific factors, a lack of differentiation between rising and falling rate scenarios, oversimplification of balance sheet categories and not adjusting qualitative factors based on historical data (such as assuming higher runoffs for surge deposits).
It is important that banks not rely on external proxies more than necessary and instead use assumptions that reflect the bank's own unique profile in order to identify risk properly. The difficulty in this is that recent historical data is reflective of such an unusual cycle that it may not be useful for longer term analysis.
In fact, a bank working to gauge what is likely to happen with the future behavior of non-maturity deposit categories that have increased in the last few years will have a difficult time finding any historical precedent within the bank or outside. Even if banks have records from the last Fed tightening cycle, this is so far in the past that it is unlikely that the bank today has any resemblance to what the organization was then. This is where running a variety of assumptions and understanding where the bank is sensitive in a variety of scenarios can help.
By using a broad set of measures, your bank should be able to show regulators that you have considered and are prepared for a variety of outcomes. The bank should therefore not be in a situation down the road where anyone needs to mansplain why the risk measurements and models used failed to accurately assess what actually happened.
Subscribe to the BID Daily Newsletter to have it delivered by email daily.

Without much to stir up the markets, it ended up being a quiet day with Treasury yields climbing 2bps by the close.

Yields are up just under 2bps ahead of wholesale inventory numbers, scheduled for release this morning.

A report by Visa finds the drop in gas prices equates to about $60 per month in extra spending dollars for the average consumer and that about 50% of this is being saved, 25% is used to pay down debt and 25% is being spent.

A bank customer service representative in OK has been arrested and charged with stealing from customers. Her scam focused on elderly customers (she used false pretenses to get them to sign blank debit tickets later used for unauthorized withdrawals), forged signatures and money taken from IRA and other bank accounts.

The Global Business Travel Association projects US businesses will spend a record $310B on corporate travel this year (a 6.2% increase YOY), as companies seek business opportunities abroad and the US economy continues to strengthen.

The CFPB indicates about 50% of consumers do not shop lenders when looking for a loan to purchase a home and 70% said they use lenders and real estate brokers heavily during the process.

CoreLogic reports the number of completed foreclosures declined 64% in the latest month vs. the peak reached in Sep 2010. Despite the improvement, the real estate analytics firm predicts it will still take 2 more years to get back to completely normal levels.

The RMA reports a recent survey of IT professionals found as much as 50% of all company data loss is due to employees using personal devices for work and work computers for personal email.
Copyright 2018 PCBB. Information contained herein is based on sources we believe to be reliable, but its accuracy is not guaranteed. Customers should rely on their own outside counsel or accounting firm to address specific circumstances. This document cannot be reproduced or redistributed outside of your institution without the written consent of PCBB.