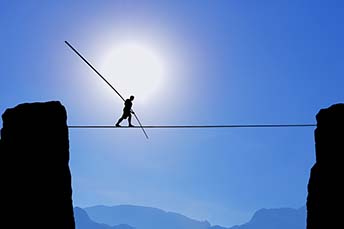 small business
business customers
payments
international
Summary: The US dollar is at parity with the euro for the first time in 20Ys, and up against numerous other foreign currencies. That’s not necessarily a good thing for companies that do business overseas. American goods are more expensive, and the dollar’s strength deflates the value of funds earned overseas. We discuss ways you can support your commercial customers who have international business ventures.
Share this Article:
Nik Wallenda, a professional acrobat and seventh-generation member of the Flying Wallendas family, never uses a safety net when he performs. The holder of 11 Guinness World Records was the first person to walk a tightrope stretched over Niagara Falls and has even crossed the Grand Canyon on a tightrope, among executing many other dangerous feats. Though Wallenda seems to have perfect balance, the strength of the US dollar is making international business transactions a balancing act.This is because the US dollar is at parity with the euro for the first time in 20Ys. It’s also up 13% against the British pound, 20% against the Japanese yen, and 6% versus the Chinese renminbi. Higher Federal Reserve interest rates have made US Treasury bonds more appealing — and anyone who wants to buy T-bills needs to make the purchase in USD.That’s great news for American tourists and consumers, who will find that a stronger dollar makes foreign goods less expensive. But it’s a drag on corporate earnings, especially for companies that do business overseas. IBM, Salesforce, Netflix, Microsoft, and Johnson & Johnson have all indicated that the dollar’s strength will eat into their profits. At Bloomberg, analysts say they’re seeing a three-year high in the number of references to foreign exchange in earnings calls.How does a strong dollar hurt earnings?

When the US dollar is up against other global currencies, it takes a chunk out of business earnings in two ways. First, a strong dollar is always strong relative to other currencies, which are weaker by comparison. Foreign consumers need more of their local money to buy exported US goods. Instead of purchasing the more expensive American export, they might shop for similar goods made elsewhere.Second, American companies that do a lot of business overseas eventually need to convert at least some of their earnings into US dollars. A strong dollar dilutes the value of that exchange. The US tech sector, which Goldman Sachs says generates about 60% of its revenue overseas, is one example of a market sector swimming upstream against the dollar’s strength.A strong dollar doesn’t take an enormous bite from corporate income, but it’s certainly enough for businesses to notice. According to Credit Suisse, an increase of between 8% and 10% in the dollar’s value means a 1% dip in US corporate profits. About 35% of American companies have enough overseas exposure for that to make a noticeable difference to their earnings per share.How can my business customers fight back?

To some extent, weathering the ups and downs of currency exchange rates is just part of doing foreign business. Even so, businesses do have some options that you can share with them to reduce costs for doing business in other countries as they negotiate the current landscape.
Ease of overseas operations is a valuable service your customers will appreciate, which is why PCBB offers a full suite of international solutions to help you get started to better support your commercial customers doing business overseas.
Subscribe to the BID Daily Newsletter to have it delivered by email daily.

Assist your customers in protecting themselves against the risk of fluctuating exchange rates with FX Forward Contracts. Help them “lock in” rates for a future date, while providing you with additional fee income. Learn more about FX Forward Contracts by contacting a PCBB representative (888) 399-1930.