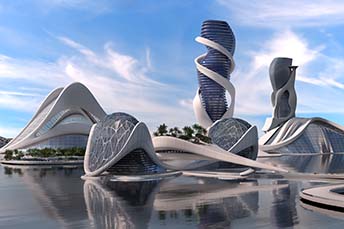 Designing Branches in the Post-Pandemic Era

by Steve Brown
millennials
Gen Z
branch of the future
branch optimization
Summary: The pandemic may have driven more people to digital banking channels, but CFIs shouldn’t go overboard overhauling all of their branches to strip away essentials — particularly human staff. Branch design going forward should be a mix of styles, depending on customer makeup and geography, with a “hub and spoke” approach that is flexible to accommodate changing characteristics.
Share this Article:
When Disneyland’s “World of Tomorrow” first opened in 1955, the plan was to build out “futuristic” buildings and attractions, all reflecting the “far-off” year of 1986. Mid-century guests were awed by moving sidewalks and suspended monorail systems. Over the years, attractions within the renamed Tomorrowland came and went, including the Rocket to the Moon, the Monsanto Hall of Chemistry, and submarines reminiscent of “20,000 Leagues Under the Sea.”By the late 1990s, though, the style of Tomorrowland began to look very outdated, even backward —  the opposite of futuristic. Disneyland’s designers then came upon an ingenious idea: to go back to something timeless and classic that connotes futurism, or rather “retrofuturism.” What better way to express that than to leverage Jules Verne’s gold-and-brown retro look? That design will surely last for decades —  maybe even centuries —  to come.Community financial institutions (CFIs) are also reinventing their branches to reflect the latest trends and demands of their customers. The pandemic certainly resulted in further tweaks to branches as even more customers were driven to digital channels. But CFIs shouldn’t drastically alter the design of all of their physical branches, particularly not with the goal of limiting human interaction, experts say.“The pandemic will end at some point,” says one branch design consultant. “It will take some time for people to reset, but creating radical change in physical environments in the next six months is not a good position when you are building something that you hope will last for 20 years.”Americans, on average, are planning on visiting their local branch more than 40 times each year post-pandemic, according to EPAM System. And that’s not just baby boomers and Gen Xers, either —  even millennials and Gen Zers believe the physical branch has become more important to them over the course of the pandemic. Younger generations also say that they would be even more likely to visit a branch if it were designed to be a “financial experience center,” which offered financial education and interactive tools providing financial advice.In your quest for your institution’s branches to be more relevant, here are some design concepts to consider when planning your branch layouts:Research local demographics and tastes first. Find out what customers in each location desire in a branch, and then design accordingly. Consider a “hub and spoke” approach that features a flagship branch in a location where customers can access comprehensive services from a variety of experts. This “hub” would be surrounded by smaller branches in the same market, augmented with interactive ATMs and other self-service technologies.A CFI in California recently opened a new flagship branch on a redeveloped site that includes private banking, mortgage, wealth management, and insurance specialists on staff, as well as the latest in digital technologies. In addition, the CFI is leasing space to three retailers to further boost the location’s profitability. Says its CEO: "This development is the end of 15-years' [sic] of vacancy and underutilization of this site, and what frankly had become an eyesore for the community. We've always been a local institution and deeply committed to investing where our members and employees live and work. We wanted to create something the community can use and enjoy for many years to come and together with our partners and the city…we believe that goal has been achieved."A Maryland CFI is opening a mix of branches, from smaller ones with less than 1K square feet that are equipped with self-service technologies and minimal staff, to larger ones with up to 2.5K square feet that also hold offices for the CFI’s commercial teams. The larger offices also feature technologies, such as tablets or laptops for digital loan applications.Spruce up the exterior design. CFIs need to capture the attention of passers-by who could become customers. “Their exterior needs to distinguish them from other banks [and show] why they are unique as a financial institution,” says another branch designer. “The architecture needs to tell a story.”Other considerations include sight lines of the branch, landscaping, and even the parking lot. Some CFIs never turn off the branches’ lights: one institution in New Jersey “used to keep more lights on at night than the competition, so that the branches were lit up like Christmas trees. The bank had some of the highest branch awareness in the industry.”Don’t forget a relaxing space for the employees. “The break room, or kitchen, should be upgraded to a much nicer environment today,” says a third designer. “Banks and credit unions are all battling for employees, especially now. You might find that adding a nice little, in-house coffee shop isn’t that big of a deal.”As the pandemic finally subsides, let’s incorporate lessons learned over the past few years to design branches that truly reflect the needs and wants of customers within those locations!
Subscribe to the BID Daily Newsletter to have it delivered by email daily.

Local School Partnerships Can Mean Future Customers & Employees
CFIs can help students gain financial literacy through partnerships with nearby school districts. They team up with high schools to develop classes in banking and personal finance and even operate in-house “banks” in schools, which increases awareness and loyalty with the next generation of accountholders and workers. We feature some noteworthy examples.