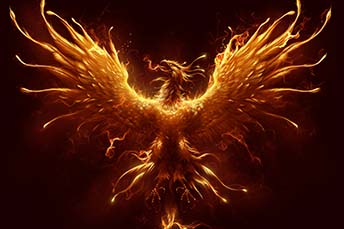 by Steve Brown
small business
lending
C&I
Summary: Demand for commercial lending is heating up. CFIs have an opportunity to expand into new markets, add talented lenders, launch new niches, and team up for bigger deals – all while maintaining stellar credit quality. We delve into the details.
Share this Article:
Well-known mythological creature, the Phoenix, is best known for its ability to rise up, or rather, regenerate, from the ashes of whatever died before. It’s a compelling story of rebirth.We see the same story of rebirth replay after the impact of the pandemic shutdowns in March 2020 and the subsequent slowdown in business.  Regretfully, many small mom and pops had to close their doors forever—including those that either weren’t eligible for Paycheck Protection Program loans or could not hold on until the federal program was up and running. America rightfully lamented that so many business owners and workers had suffered greatly. But like the story of the Phoenix, many of those business that closed were able to rebound the following year,  resulting in 5.4 million new business applications being filed in 2021—the highest annual number ever recorded, and a 53% rise from 2019.“The data reflects what we see in our communities,” says the CEO of a New York community financial institution (CFI). “There were stores and businesses that shut down because of the pandemic, but we see many others starting up.”In this environment, it’s no surprise that the demand for all types of commercial loans is heating up.For all domestically chartered commercial banks not included in the top 25, commercial real estate loans rose to just over $1.7T in May, from $1.6T a year earlier. Construction and land development loans rose to $277.6B, from $242.5B and apartment loans rose to $254.3B, from $228.4B. While commercial and industrial loans fell in May to $781.8B, from $879.2B a year earlier, totals in this category have been steadily rising week after week, and were $786.1B on June 1. Overall, commercial lending is growing. Recent hikes in the Federal Reserve’s benchmark interest rate isn’t stymieing loan growth either. A Connecticut CFI leader says that since interest rates are still historically low, the institution's commercial borrowers have “plenty of room to maintain profitability. A lot of them have refinanced already, so they are all in a relatively strong condition, and the amount of liquidity in the market right now is very high.”As competition among lenders also heats up, here are several things that your institution should consider:Expand into new markets and add talent in all locations. Look for experienced lenders who can lure in additional business, both in your existing markets and new ones. A Missouri CFI recently opened a new commercial loan production office in Charlotte, North Carolina, with a veteran lender to lead it—the eighth such office across the institution’s expanding footprint.The CEO of a Michigan CFI says that the institution is “continuing to look to add the right talent, both in our existing market and potentially in adjacent markets. We think that banking, especially business banking, is a relationship business, and therefore, the bank that has the best team of bankers is going to win.”Launch more lending niches. Exploring more lending niches could potentially be quite lucrative. A New York CFI is leveraging its success in making PPP loans by offering unsecured commercial microloans of less than $25,000 to small businesses with revenues of $100,000 or more. A Wisconsin CFI has expanded its traditional CRE and C&I lending to also offer specialty loans online across the country, including asset-based loans, equipment financing, financing for used car dealerships and SBA loans.Indeed, the number of CFIs interested in making SBA loans is skyrocketing, says a lending executive at an Oregon CFI. This lender recently taught an online session on the agency’s program at a SBA lender conference—of which nearly 400 lenders tuned in. “It is astronomical how many institutions have realized after doing PPP loans that SBA is not as scary as they thought,” the lender says.Team up. Four CFIs in Minnesota banded together to launch an initiative to collectively pursue commercial and infrastructure-financing projects throughout the Upper Midwest. “This is just a starting point,” says one of the CEOs. “We deeply believe we are all stronger if we work together.”Maintain credit quality. Don’t be tempted to overly loosen underwriting standards to compete—even when other institutions and nonbank lenders do. One economist said, “The probability is pretty high there are going to be increasing pressures on credit quality and loan demand and changes in pricing as the Fed continues to run up interest rate increases to deal with this inflation.”With commercial lending demand on the rise, now is a good time to expand into new markets and niches.
Subscribe to the BID Daily Newsletter to have it delivered by email daily.