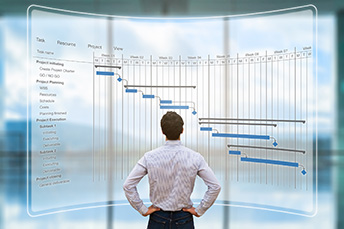 by Steve Brown
technology
digital banking
mobile banking
Summary: According to an FDIC survey, 40% of banked households used mobile banking in 2017. We provide more digital banking highlights to help you stay on top of this competitive area.
Share this Article:
Research from the Project Management Institute highlights some sobering statistics when it comes to corporate projects and whether they succeed or fail. In particular, it finds the top 3 reasons people said projects started in the past year later failed were due to: a change in the organization's priorities (39%), change in project objectives (37%), and inaccurate requirements gathering (35%).
Community bankers with limited staff due to size and extreme levels of competition must constantly manage a multitude of projects both big and small. One such area revolves around the ongoing digital revolution and the significant growth in mobile banking. To illustrate the extent of that progress, we bring you the findings of two recent industry reports.
First, consider that the number of mobile banking apps as of September climbed 9% from 2017. That's the biggest YoY gain in the past 3Ys, according to a 2018 Malauzai Software report. There are 7,346 financial institutions included in the count and 86% have a mobile banking app, according to Malauzai.
Within the bigger bucket, consumer mobile apps are growing at a much faster pace than their business brethren. The number of standalone mobile banking business apps has just about doubled in the past year, but there are still only 549 by Malauzai's count.
By contrast, P2P payments are flourishing. More than 1k financial institutions now offer P2P within their banking app. Missing conspicuously from the picture is Zelle, the multi-bank-backed payment network. According to Malauzai's's tally, only 20 financial institutions offer this service. Given the slow start, it remains to be seen how, when and if Zelle will pick up steam.
Turning to the second report, mobile banking was used by 40% of banked US households to access their account in 2017, almost double the 23% from 4Ys earlier, according to an FDIC survey. The share of banked households that use mobile banking as their primary method of account access also rose significantly over the 4Y period, the report found.
Worth noting is the potential opportunity to gain more business from underbanked consumers through mobile banking. More than 2 in 5 of underbanked households already use mobile banking to access their bank accounts, yet many of them are heavy users of cash or nonbank money orders, the FDIC notes.
For many banks the question is no longer whether to offer mobile banking as that ship has already sailed. Rather, the future challenge is fine-tuning offerings to ensure customers remain loyal and satisfied. This is especially pertinent since Generation Z members (born roughly between 1996 and 2010) have never experienced life without technology. Keeping these customers engaged means providing speedy, seamless and safe mobile banking experiences.
We know that most of you have already started this journey. But, with some of the latest survey information, you may have an idea which direction to turn next. We will continue to keep you updated with the latest and greatest, so stay tuned as you grind through your list of projects.
Subscribe to the BID Daily Newsletter to have it delivered by email daily.