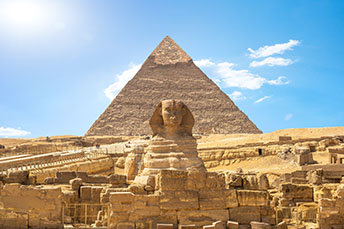 by Steve Brown Topics: stress testing, COVID-19, coronavirus
Summary: While the Fed concluded that the big banks were currently stable, financial institutions of all sizes should be stress testing to anticipate the impact of COVID-19 on capital.

The Great Sphinx of 2500 BC is still one of the largest statues today, standing larger and taller than a six-story building. Clearly, it was built for stability. Another kind of stability involves stress testing, bankers, and the Fed.
The Fed has given its thumbs-up regarding the stability of the banking industry's largest players -- at least for now. But, financial institutions should not let their guard down; the coronavirus has proven more long-lasting than first anticipated.
After running Dodd-Frank stress tests, along with additional testing directly related to the impact of COVID-19, on the nation's 34 largest banks, the Fed concluded that these big financial institutions are stable enough right now. Yet, with a second wave of the coronavirus looming, the Fed has instituted a few additional regulatory actions to keep it that way. Those include: suspending share repurchases; limiting dividends to not exceed recent income; necessitating banks to re-evaluate their capital requirements and providing them again later this year, and conducting extra stress analyses later this year as more bank data becomes available and the economic situation develops.
Though the majority of the big banks announced that they fared well enough to continue paying quarterly dividends, Wells Fargo was a notable exception. It announced that it will reduce its quarterly shareholder payment to strengthen its capital position.
With COVID-19 infection rates continuing to rise, coupled with scientists' expectations for a second wave that could be even worse, the Fed is planning to subject the banks to a second round of stress testing. These financial institutions will need to stay on top of the changing economic dynamics to be well prepared for this stress testing revisit by the Fed. According to The Economist, the regulator expects the core-capital ratio to drop from the current level of 12% to 8% with a U-shaped scenario (one with a long-term need for physical distancing). While this is still acceptable, it is getting a little close for comfort from the minimum capital threshold.
If market stress remains, the Fed predicts that the loan portfolios of the banking industry's 34 largest players could face combined losses of up to $700B under the U-shaped scenario, substantially higher than the $465B it forecast during the first year that stress testing took place in 2009, following the 2008 credit crisis. So, careful watch is needed for these financial institutions.
Though the Fed's stress testing is limited to the largest banks, the results could be insightful for you too. The general health of the banking system affects all financial institutions, and further, many community financial institutions are more vulnerable than its larger brethren when it comes to certain lending exposures.
While only two banks with $100B or more in assets have CRE exposure in excess of 3x their bank's tangible common equity, more than 2K CFIs have exposure exceeding 5x theirs and almost 150 CFIs have more than 10x. With this in mind, it is important to stress test your loan portfolios with several "what-ifs" to plan ahead. For more on this, read our article with stress testing tips or give us a call.
Subscribe to the BID Daily Newsletter to have it delivered by email daily.

The corporate parent of broker-dealer, Edward Jones, has applied with the FDIC to create the Edward Jones Bank to be chartered in Utah. If approved, operations could start in 2021.

In the first half of 2020, Chapter 11 business bankruptcy filings rose 26%, according to Epiq Systems Inc. Chapter 11 filings surged 43% in June YoY.

The OCC stated that it will consider the coronavirus-specific compliance challenges, including new procedures and guidance on fair lending, data privacy, and money laundering, as it conducts exams and decides enforcement of an institution's compliance.

Now more than ever, it is important to stress test loans of all types from multiple perspectives. Choose your approach and get expert help, as needed. Learn more about stress testing today.
Copyright 2018 PCBB. Information contained herein is based on sources we believe to be reliable, but its accuracy is not guaranteed. Customers should rely on their own outside counsel or accounting firm to address specific circumstances. This document cannot be reproduced or redistributed outside of your institution without the written consent of PCBB.