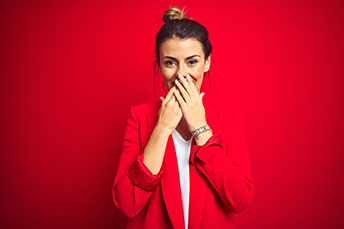 We thought it interesting that the only animals found blushing are humans. Try making your pet blush and see if we are right! In the meantime, we want to pivot to the Paycheck Protection Program (PPP) and how you may get additional customers due to their frustration with the process.
PPP promised to be a lifeline to small businesses struggling in the pandemic-related economic crisis. But indeed, many small businesses became so frustrated with how their financial institutions handled PPP loan applications that they are now ready to switch to another financial institution. This is good news for community financial institutions (CFIs). Your capable handling of small business lending has put you in a prime position to capture some of these small businesses looking to switch.
The number of small business bank accounts in play could be substantial. There are more than 30MM small businesses in the country, so the number of those frustrated enough to switch institutions could be in the millions, and the bank balances they control could reach well into the billions of dollars.
According to a recent Greenwich Associates survey, more than 20% of small businesses and 14% of middle-market companies said they were likely to switch, because of frustration with their existing institutions over the way PPP loans were handled. In fact, around 33% of small businesses rated the PPP application process as poor or below average.
It is worth noting the difference in frustration level between small businesses and middle-market businesses too: the smaller the business, the greater the frustration level. That sentiment tracks with businesses that felt that big banks were being more loyal and responsive to their bigger and more important customers. But, we have heard that in many of those cases, CFIs were able to help out. As one CFI lender noted who handled a new small business owner's PPP application, "We had people coming to us because they just weren't told anything, and that lack of any guidance from their own bank creates that sense of concern."
CFIs have enjoyed a good reputation with small businesses, including being responsive. So, it doesn't surprise us that the SBA reports 5,338 financial institutions under $10B in assets accounted for 44% of the net PPP loan amount and supplied over 2.5MM loans to small businesses, as of June 30th.
CFIs may find themselves in a strong position to capture additional new small business customers who were unhappy with how their banks handled PPP applications. Business borrowers voiced several areas of concern in the survey. Loan applicants complained about confusing application processes, poor communication about the loans, and a lack of responsiveness and customer service.
Still, businesses considering a switch will no doubt be very discerning, not wanting to move to a new financial institution only to have a repeat bad experience. Thus, CFIs that can demonstrate their PPP lending skills and provide responsive customer service could be well rewarded.
Subscribe to the BID Daily Newsletter to have it delivered by email daily.

Recently, FinCen reinforced the fact that anti-money laundering efforts should still be followed by financial institutions (FIs) for hemp-related businesses. FIs should have a copy of the grower's license or the grower's written declaration to ensure these businesses are compliant with state, tribal government, or USDA licensing requirements.

Trepp LLC just reported overall commercial mortgage-backed securities (CMBS) delinquency rate hit 10.32%, an increase of 3.17% from May and just shy of the record of 10.34% in July 2012. More than 20% of loans were on servicer watchlists with signs of potential distress. About 25% of loans backed by US hotels in CMBS were 30 days or more delinquent in June.

M&A On The Decline

In 2019, there were 257 M&A deals, making it one of the busiest years for deals since the financial crisis. Yet, 2020 saw only 40 M&A transactions so far, according to Keefe, Bruyette & Woods with S&P Global Market Intelligence. That is 70% lower YoY. The average premium for 1H 2020 went down from about 170% of a seller's tangible common equity a year before to just over 154%.

Your institution can purchase fully-funded, senior secured floating-rate loans to diversify your portfolio. Contact us today for more information.
Copyright 2018 PCBB. Information contained herein is based on sources we believe to be reliable, but its accuracy is not guaranteed. Customers should rely on their own outside counsel or accounting firm to address specific circumstances. This document cannot be reproduced or redistributed outside of your institution without the written consent of PCBB.