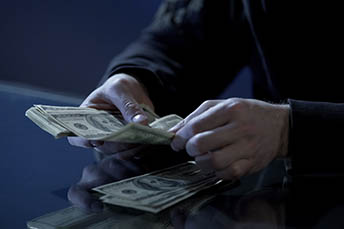 by Steve Brown Topics: cyber risk, risk management, COVID-19, coronavirus
Summary: Ransomware has been a growing threat. But, the greater reliance on digital access from the pandemic has resulted in an alarming spike in attacks.

The film "All the Money in the World" depicts the real-life kidnapping of one-time-richest-man in-the-world J. Paul Getty's grandson -- and his controversial refusal to pay the ransom.
In the 50 years since this iconic story came to light, the issue of whether paying extortion is a good or bad idea has been hotly contested. Nowadays, extortion has moved to the digital realm. More hackers see ransomware schemes as a quick way to make cash, by gaining access to and locking up businesses' important data and systems, which they will release only when a ransom is paid.
Ransomware has been a growing threat for several years, for financial institutions (FIs) as well as businesses that have become the target of such attacks. With the onset of the pandemic and a sudden heightened reliance on digital access, a huge boom in ransomware has resulted.
Indeed such attacks on FIs increased more than 230% just between the beginning of February and the end of April of this year. One-quarter of victims said these hits caused significant damage, as well as generate a ransom payment, according to VMWare Carbon Black.
In late July, the FBI sent an alert warning of at least one ransomware variant, Netwalker. It had been gaining ground since June, and was "taking advantage of the COVID-19 pandemic to compromise an increasing number of unsuspecting victims."
The reason for the leap in attacks is clear and multi-fold. Like all businesses right now, FIs are often working with a much more limited staff. They're still trying to provide open and easy access to customers who cannot go into a branch and they are experiencing much higher than normal demand on their online and mobile interfaces. So, what can community financial institutions do in the face of this increasing and expensive threat?
Subscribe to the BID Daily Newsletter to have it delivered by email daily.

Goldman Sachs revised its jobless rate forecast for 2021 to 6.5% from 7%, because of a more positive outlook for job growth in the first half of the year. Its projection of a 9.0% decline in unemployment in 2020 remains unchanged.

Coronavirus safety measures are cutting into the profits of small businesses. According to Biz2Credit's Small Business Financial Health study, restaurant owners will spend an average of $52,106 for PPE this year.

The number of meetings workers attend has increased since the start of the pandemic. Surprisingly, however, the length of meetings has decreased by 20%.