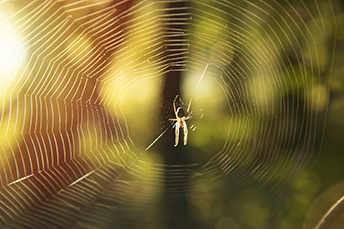 Learning From Fannie And Freddie With CECL

by Steve Brown Topics: CECL, risk management, compliance
Summary: Like other financial institutions, FNMA and FHLMC must follow the rules of CECL. Yet, if these two GSEs adopt CECL compliance all at once, it could mean withdrawing billions of taxpayer dollars from the Treasury in 2020.

Spiders and the webs they spin are amazing. Spider silk is 5x stronger than the same weight of steel. It is shiny in order to attract insects. Many spiders replace their entire web every day, and spider silk transforms from liquid to solid thread as it leaves the body. As you ponder this, we direct your attention to another sticky topic, CECL.
Congress has suspended CECL rule implementation for FNMA and FHLMC as the Department of the Treasury takes a look at its possible impact.
Like other financial institutions, FNMA and FHLMC must follow the rules of CECL. Yet, if these two government-sponsored enterprises adopt CECL compliance all at once, it could mean withdrawing billions of taxpayer dollars from the Treasury in 2020.
"When you have to come up with a huge amount of reserves here against the portfolio of the GSEs and their limited way of getting income, there's just no way for them to raise the kind of money needed to reserve," says Missouri Representative Blaine Luetkemeyer, who has been studying CECL since 2016.
FNMA and FHLMC aren't the only large financial institutions concerned about CECL's larger impact. A variety of experts and industry associations worry that CECL could even perhaps make an economic recession worse. One of the many portions of an annual federal spending package passed on December 19 says that CECL adoption will pause while the Treasury studies the rule's potential negative effects.
Estimates of how much FNMA and FHLMC will have to set aside under CECL vary. Luetkemeyer estimates reserves from $50B to $100B, while Keefe Bruyette & Woods analysts say the necessary reserve will be from $10B to $12B.
FNMA and FHLMC themselves are still studying the question and haven't released their own estimates. In a regulatory filing, FNMA said that the CECL standard may substantially decrease its capital, while also raising its credit loss allowance. The combination could mean a "net worth deficit," the GSE says, of billions of dollars.
Though FNMA and FHLMC have an implementation date of January 1, 2020, both GSEs can stretch CECL compliance over 3Ys. That could mean that neither one takes capital from the Treasury, instead building capital from retained earnings.
The regulator for both GSEs however insists FNMA and FHLMC hold no more than $3B in excess capital and return any sum above that to the Treasury, so things remain murky.
We don't know how all of this will end up, of course, but we are keeping an eye on everything regarding CECL. Give us a call if you have any questions, as we are happy to help.
Subscribe to the BID Daily Newsletter to have it delivered by email daily.

BAI research projects that in the next 3Ys, customer channel usage will overwhelmingly be digital at 67%. By category it breaks down into mobile (27%), online (24%) and ATM (16%).

Fed governor Bowman said she sees the economic backdrop as very favorable and growth at a moderate pace with a low unemployment rate.

A survey of customers of large and regional banks by JD Power finds customer satisfaction with bank advice delivered digitally has climbed ~2% YoY to 83% vs. 1Y ago. Customers express high satisfaction levels with digitally delivered advice through websites, mobile apps and email.

Online peer to peer lending company LendingClub said it plans to acquire online-focused bank, Radius Bank (MA) for $185mm in cash and stock. This is the first acquisition of a bank by a fintech company. The transaction will allow LendingClub to keep more fees and interest on the loans it generates, reduce its funding costs and get it into the banking business more fully.