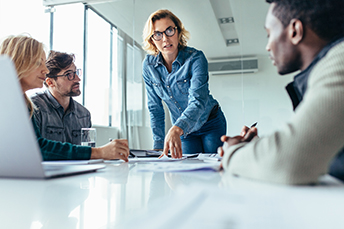 by Steve Brown Topics: performance, risk management
Summary: The latest FDIC performance report showed strong numbers for community banks. However, doing more of the same may not be the best course of action.

A Harvard Business Review survey looked at how CEOs and senior executives rated their top management teams on several factors. By category, senior executives rated teams 34% lower for overall effectiveness than CEOs. Other findings: decision making processes are clear (-46%), team deals well with conflict (-33%), and CEO provides effective direction for the team (-39%). To improve performance, it looks like more work is needed to help close the gap between groups - regardless of company.
Speaking of performance, the FDIC recently released its performance report for Q1 and we wanted to share some highlights. We also bake in additional data from the St. Louis Fed to give you a snapshot of the current economic situation.
If you happen to be looking toward the recent past, these are truly wondrous times. The FDIC report shows the industry racing along, with strong revenue growth paced by community banks (+10.1% YoY net income growth for the quarter). Meanwhile, the community bank net charge-off rate of 0.09% was the 2nd lowest on record. Also, the QoQ and YoY community bank growth rates for loans outperformed those for non-community banks. The recent past has yielded other similarly rosy performance statistics.
Yet, when you shift your gaze to the future, things get considerably murky, considerably quickly. At the same time as the FDIC report was released, financial analysts were raising alarms about the risk for a potential recession and the negative impact of a flat to inverted yield curve on bank margins.
While the FDIC report offered no window into the future, another federal agency did. Here we look to data from St. Louis Fed. It issued a report that said four housing indicators - 30Y fixed mortgage rates, existing home sales, real housing prices and contribution of residential investment to GDP growth - are all now in the range that preceded the last three recessions. The report noted that this does not necessarily mean a recession is imminent, yet caution should be exercised.
So, what is a community banker to make of all this? With banks in general and community banks in particular performing so well, one might choose to downplay the warning signs as overblown negativity at a time of great opportunity for banks.
Thus, while you might want to keep your eyes open for economic trouble, you don't want to pull back when there is still money on the table. This seems to be the approach that banks are taking recently, as is reflected in reports from regulators that banks have been loosening loan standards lately.
In the alternative, a more conservative approach might be to start hedging your bets now. Perhaps being more cautious about lending, spending, and establishing contingencies in case the worst does happen are in order. Of course, this might be a less profitable strategy if the economy continues to hum along.
Maybe the best approach though is to find a place somewhere in between. Continue your same prudent risk management, while closely watching the economic situation. Keep your underwriting in line with your bank policies. Basically, try to close the gap on where you are and where you need to be, just in case a recession does come so your bank is ready.
Subscribe to the BID Daily Newsletter to have it delivered by email daily.

Facebook has reportedly signed up over 12 companies to back its digital currency set to be announced next week. Major companies like Visa, MasterCard, PayPal and others have all put up money to fund the creation of a digital coin pegged to a basket of government issued currencies.

The SEC is proposing exempting companies with less than $100mm in revenue from having to obtain an outside audit to assess internal controls over financial reporting. Banks with assets $1B or more however, are still subject to FDICIA's external audit requirements.

The CFPB has extended the compliance date for underwriting provisions in the Payday Rule governing short-term, small-dollar loans from 8/19/19 to 11/19/20. The rule requires financial companies test for the borrower's ability to repay, includes payment withdrawal restrictions, and increases notification requirements.