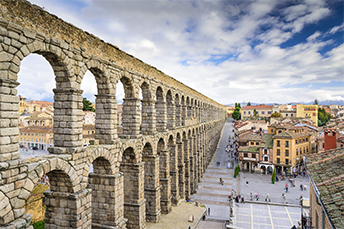 by Steve Brown Topics: marketing, technology, business customers
Summary: Some community banks are shifting from traditional ads to digital ads. Is it worth switching?

The Romans sure invented some interesting things in their time. They invented concrete, aqueducts, newspapers, welfare, roads, arches, and even the modern day calendar. Oh yeah, they also invented using urine to clean and whiten teeth. Gross, but it just goes to show you some inventive types might not know when to stop.
Today's modern technology revolution has forced banks to invent new digital ways to connect with clients. This has also prompted some community banks to shift marketing efforts from traditional advertisements to digital ads.
While it makes sense for community banks to focus marketing efforts on the venues that will get the most visibility among targeted customers, the unfortunate reality is that digital marketing doesn't reach nearly as many people as most believe.
So, before deciding what portion of your marketing budget to allocate to digital advertising, here are a few things to know:
Though people are online a lot, that doesn't necessarily mean they are actually bothering to look at digital advertisements. In fact, as digital advertising has become more prevalent, many people are taking advantage of ad blocking software programs that have sprung up in recent years. When it comes to mobile phones alone, usage of ad blocking applications rose 38% over the past year. Unfortunately for advertisers, that reality isn't always visible in the feedback they receive for digital ads.
Another thing to consider is click fraud. Since the cost of advertising on many websites and online publications is based on the number of individual clicks an ad receives, click fraud has become rampant. Stories abound of websites that materially increase the number of apparent ad clicks, by paying individuals to repeatedly click on that ad, or utilizing software programs that generate automated clicks.
According to research from one communications agency, of the $27B spent on digital advertisements placed through automated technology, almost 30% of that money was spent on fraudulent ad views that resulted from click fraud.
The popularity of digital advertising has grown exponentially, resulting in a much higher price tag for such ads. The average cost per click for the finance industry is $3.72 right now. While that may not sound like a lot, digital advertising can quickly add up. According to Wordstream, the amount the average small business using Google AdWords spends on their online ad campaigns is $9-10k per month.
People certainly look for information on banks in their geographic area or for specific banking services. That is good. But most of the time people are online, they are using social media. Knowing this, your bank may want to focus digital advertising dollars more on social media to specifically target certain heavy-users, such as millennials perhaps.
Marketers know that building a successful and recognizable brand is largely about repeatedly exposing people to consistent, positive messaging about your bank and its products and services. Despite the surge in digital activity, this is also something that hasn't changed very much over time. However, things keep changing, so community banks should probably assess all advertising options and not just the digital ones. You might reach more customers and prospects with a mix of things, as you keep trying new ways to do so.
Subscribe to the BID Daily Newsletter to have it delivered by email daily.

An AiteGroup survey found the AML budget is spent on: internal staff (63%); technology (31%) and external consultants (6%).